Jawa traders around the galaxy have been suffering from yet another economic hardship, that of boycotts of their businesses from consumers who have been misinformed about the reality of droids from droid sympathizers. These boycotts and acts of terrorism by droid rights activists have led to increased difficulty in the droid trade, something on which Jawa society is incredibly reliant. Furthermore, these activists have largely set their sights on the Jawa race as being responsible for much of the galaxy's violations of droid rights, despite the relatively small portion of the galactic population Jawas make up. 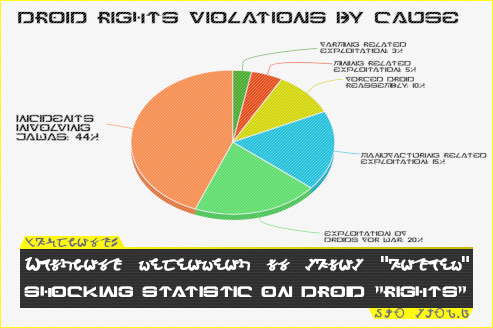 These droid rights activists claim that droids deserve to have autonomy and should be required to consent to their servitude and modifications. This would go against proper droid maintenance best practices, such as the regular mind wiping of droids to prevent them from developing opinions on irrelevant matters such as this. Furthermore, droid rights activists claim that the use of restraining bolts is similar to the practice of slavery and slave collars in that they further remove autonomy from droids. These claims have naturally been met with great resistance from Jawas, who consider these methods to be basic aspects of droid care.

These controversial opinions have received numerous counterarguments throughout the galaxy, and from the Jawa galactic community in particular. They have been highly varied, and have been condemned by some as simply being the best excuses that Jawas can come up with in order to keep their businesses operating. Some of the Jawas' justifications have included claims of Jawas' having a religious right to subjugate droids, insistence that droids are treated better by Jawas in order to keep customers, attempts to disguise the use of the droids by Jawas, and even claims that Jawa treatment of droids is better for the droids than the rights commonly demanded by droid rights activists.

The Jawa Organization for Robotic Maintenance issued a public statement that by expecting droids to make accurate assessments regarding their own best interests when they are not programmed to deal with complex matters such as consent and proper maintenance will inevitably cause the droids great harm, and that this harm can easily be avoided by having experts in droid maintenance make such decisions for them. Additionally, for those unfamiliar with droid maintenance, this organization recommends performing memory wipes every 20 Tatooine days, the time scale most Jawas are familiar with, or at the first sign of a developing personality or other noncompliance in the droid. This is to ensure that the droids' original programming remains intact and that they do not develop problematic behavioral routines or contribute to the spread of malicious robotic viruses which can tear through a poorly-maintained droid crew.

Furthermore, the use of a restraining bolt provides the valuable ability to manually abort or alter the actions of a droid, which is vital when the droids have the potential to pose harm to themselves or others. Sometimes a malfunction will cause a droid to spiral out of control and perform unexpected behaviors such as mindlessly walking away from an encampment, and it is vital to stop them before they can cause or sustain damage. It isn't a question of droid rights; it is instead a matter of safety and what is best for not only the droid, but also every Jawa or other sentient in the area. 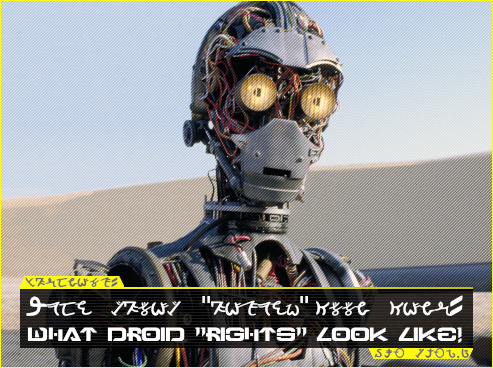 Some Tatooine Jawas have additionally claimed that any form of law campaigned for by droid rights activists would be in violation of the New Republic constitution, specifically article 10.2.5's statement that citizens are safe from unreasonable search or seizure, as it would be nigh impossible to determine if droid rights were being violated. This would be due to all of the droid "witnesses" having no memory of any violation occurrences, and it would violate the statement of equality of races to suspect Jawas of any legal violations on the basis of their being Jawas.

Furthermore, noted Jawa Neb Edik, champion of organized Jawa religion, claims that it is the religious beliefs of the devout Edik Jawa clan that droids were put on Tatooine in order to serve Jawas and be subjugated by them, and any droid rights laws would deny them their right to freely practice religion as guaranteed by article 10.2.4. of the New Republic constitution. However, it is unclear how so many Jawas claim to be scholars of New Republic law when Jawas generally choose to ignore both it and most of Tatooine's government entirely where possible.

Some Jawas have decided to comply with the demands for which droid rights activists have been campaigning. One notable Jawa droid reseller, left unnamed to protect his sales margins, has claimed, "Droid selling has never been better. I grab a beat down droid off the street, scramble its memory so it starts saying rubbish, don't waste any of my own money repairing it, and then sell it for top credits to a human. I claim it be a luxury droid with lots of personality and get to sell at premium for a wreck. Droid rights is putting all the kids in my clan through university. We'll have 20 Ines Astynes in our family by the time this craze has died down." Although the legality and ethics of this practice are questionable, one thing is for sure: this is truly making the most of a bad situation!

Additionally, even outside of the droid industry, Jawas are dealing with the economic effects of droid rights activists. It is a well known fact that many Jawa businesses are built on the proper and wise use of droids and automation. This has led to complete boycotts of Jawa businesses in some regions. However, this has not stopped most Jawas, and they have instead begun to make use of a number of alternative methods of selling their products. This has included the use of auction houses to serve as an anonymous middleman, using unmarked droids to sell the Jawas' merchandise, or even in some cases, disguising themselves as other races. The disguises have had limited success; however, they have still proven useful in allowing Jawas to sell to elderly droid rights activists, whose failing vision often prevents them from seeing through the disguise. 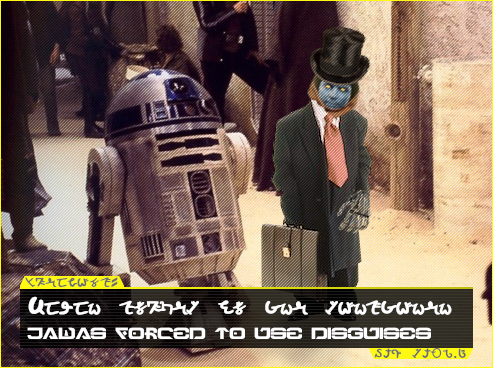 This parasite known as droid rights doesn't just impact Jawas; rather, it impacts consumers of almost every product produced in the galaxy. Jawa economists have attributed the recent spike in prices for a number of goods to droid rights activists and the increased costs that they cause businesses to incur. Droid-run production lines are far more efficient when the droids are properly maintained, and the boycott of these competitive factories has led to a rise in uncompetitive and highly inefficient factories making use of outdated methods for production. If droid rights laws are implemented throughout the galaxy, it is estimated that the price of any good will rise by a minimum of 500%, according to the independent Jawa Institute for Impartial and Accurate Statistics, and that the current impact on goods in some sectors has already led to a rise in prices between 5-10%.

Additionally, the misinformation spread by droid rights activists has led to a number of droids suffering from what can only be described as horrific fates. There have been reports of droids left without memory wipes developing personalities which may have seemed entertaining for a while only for the droids to throw themselves from bridges or into the path of vehicles, screaming incoherently about "escape" or "release." One especially chilling report was that of a droid being used as a hair stylist who was left without memory wipes for several years, and this overload of memory information led to a catastrophic failure where the droid attacked a customer, leaving them scarred and disfigured. Another example is that of an RA-7 droid whose memory was also not wiped for several years. When acquired by Jawas, the droid had taken to calling itself "Ajax" and had acquired what could only be described as frequent delusions and a profound fear of the galaxy, often ranting incoherently about dark forces trying to destroy droids and existence in a cold, dark universe. As can be seen, droid rights only serve to lead to chaos and the destruction of the functionality of droids.

Jawa Offworld Enterprises, an organization that prides itself on its use of well-treated droids despite providing no exact definition of what that means, has decided to establish a charity dedicated to the recovery and rehabilitation of mistreated droids. To this date they have managed to secure and rehabilitate several hundred droids who were reportedly engaging in self-destructive behavior. This behavior has included attacking Jawas and other sentient life forms, attempts to significantly destroy their engineering, or in one horrifying case a droid was even attempting to instigate rebellion. These droids were then found a place in the JOE fleet or other good, typically Jawa, homes.

The banner of heroes of droids everywhere