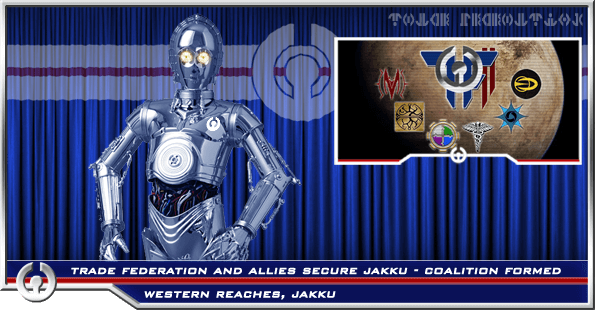 On the morning of Day 307, Year 20, a coalition allied with the Trade Federation formally took power on the planet Jakku and of its surrounding space. It had been widely expected that the sudden revelation of the planet's coordinates on Day 302 would lead to the outbreak of war in the sector, echoing similar, intensely fought campaigns in the Corellian Sector, the Hosnian system, and on Vectinia. The allure of such a large and undeveloped planet had all but promised conflagration as governments, corporations and mercenaries scrambled towards the newly-dubbed 'Western Reaches.'

The anticipated crisis, however, failed to materialise. At a gathering of the coalition's leadership, where the planet's future status was solidified, Trade Federation Viceroy Jacob Jansen explained the lengths to which his government had gone to stabilise the system. "Jakku's fate, had we done nothing, was a predictable one: an extended, bloody conflict and the emergence of a potentially hostile victor. All of this on our southern border. The implications of this for our security made non-intervention impossible." Almost immediately, therefore, the Trade Federation had coordinated with its military allies in the Endor Pact, along with other corporate partners, to secure the system and avert unnecessary instability in the region. Within twenty-four hours a coalition of six powers had agreed to cooperate in the securing of Jakku and for its development under their joint authority. Alpha Medical Corps, Kolkpravis and the Czerka Corporation joined from the Endor Pact, a regional non-aggression and defense treaty signed in Y19 by the powers which succeeded the Avance Coalition. The Mindabaal League and Mecrotica Conglomerate, both of whom govern systems in the southwest regions of the galaxy, have been close commercial and diplomatic partners with the Federation for several years.

A rapid and successful military, diplomatic, and economic campaign has left the coalition directly overseeing 90% of the planetary surface. The other 10% now finds itself in the hand of private investors, and deeds to those tracts are changing hands so frequently on public marketplaces that it is impossible to predict who might eventually come to control those plots. Although Trade Federation officials confirmed the coalition would not seize those areas claimed before it assumed formal control of Jakku, construction and development will only be permitted for members of the local coalition governing the system. Viceroy Jansen's message for those hoping to build on Jakku without permission was clear: stay away. A staff member of the Viceroy's office later stated that the seven partners overseeing Jakku had agreed to use "whatever means necessary" to ensure the safety of their citizens and settlements. "Jakku," the spokesperson stated, "is in no way to be considered contested territory." Several members of the Jakku coalition have issued travel advisories for all non-essential personnel until it is certain that all outside actors have heeded Viceroy Jansen's warning. Duceroy Salamku Derov suggested that it would be "something of a risk" for anybody to attempt a breach of this condition, nevertheless assuring holders of territory that "those who will work with us can expect to see the benefits for years to come." 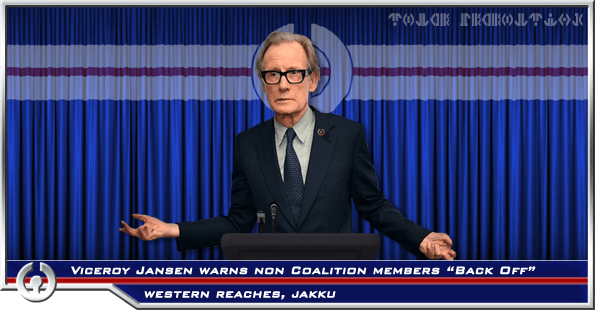 Dac Kain, of the Mecrotica Conglomerate, suggested that an inclusive view of Jakku's future was planned by the coalition. "I am excited to be a part of what is happening at Jakku. We aren't simply 'wrapping up' a post-conflict zone, the agreements we're working on are a true departure from how most planets are governed. Every signatory to the accords we are preparing will have a tangible seat at the table." The precise details of this 'Jakku Agreement' are expected to be published in the coming weeks. It is understood, however, that the coalition's guarantee for a multilateral government on Jakku played a significant role in convincing other organisations with large holdings on the planet, to support its plans for the region's future. Endless Endeavors, led by Kez Aak, formally joined the Jakku Coalition on Day 305.

The current plans for the system call for the planet and her moons to be developed cooperatively by all members of the governing coalition - a physical representation of the growing, prosperous relationships between the member governments and corporations. The Trade Federation hopes this arrangement, if ultimately successful, will serve as a template for the settlement of systems discovered in the future, averting the sort of catastrophic conflicts which have engulfed the galaxy in recent years.