REPUBLICA (INB) - Millions of sentients gathered around the Senate building today as Emperor Seele arrived on the planet of Republica to formally address the New Republic Senate. Accompanied by the 1st Imperial Legion, which had arrived a week prior to oversee preparations and guarantee the safety of the head of state and his entourage, the Emperor’s arrival signals the end of the former New Republic and everything it symbolized. Many citizens both, curious and welcoming, flocked to His Majesty, eagerly hoping for the opportunity to catch the briefest glimpse of the man who now carried the burden of restoring their worlds to prosperity. "I for one welcome our new sovereign", spoke one of the local police officers, who gladly joined the cheering crowds after being relieved of his duties for the day as security was taken over by the radiant and ubiquitous Stormtroopers of the Imperial Army.

With a summons to the Senate building at 1400hrs local time, it appeared the only Senators to attend were either supportive of the Imperial regime or those caught on-world once the arrival of the 1st Legion resulted in a lock-down of the planet. It is suspected many Senators fled their capital world upon the announcement of the surrender, while a few were known to be serving elsewhere in the Republic at the time. Nonetheless, the Empire proceeded with what could be seen as a largely ceremonial disbanding of a Senate that was already toothless and abandoned.

Speaking before the remaining Senators and broadcast across the galaxy, His Majesty did not mince words as he confronted the representatives for their contributions to a broken and twisted political system. In an inspired speech, he denounced their complacency and corruption, and lamented the deep chasm between the legislators and their constituents. Emperor Seele began his address with a brief but powerful statement, signalling the end of the once powerful Senate: "With the integration into the New Order and the evidence brought before me, I have no alternative than to conclude the Republic Senate is incapable of serving the people. By my order, the Senate is hereby disbanded on Year 21 Day 30."

The leader of what is now the largest nation in known history outlined his plans to bring the Republic's territories under the superior and effective governance of the Imperial Union. Former Republic officials who cooperated were promised leniency and even a place within Imperial ranks as their intimate knowledge of these territories made them well-suited governors capable of distributing the New Order's ideals in the most peaceful manner possible

“As you know, I have appointed Imperial governors to oversee the transition to rule by the Imperial Union. While accepting the unconditional surrender of the New Republic on behalf of the entire Imperial Union, it is important your worlds are divided amongst the Imperial Union member states. This is in recognition of the need to respect local traditions and cultures, and that direct Imperial rule over some of these regions is not an appropriate or responsible approach to harmony.” On cue, Stormtroopers were seen to enter the Senate rotunda and begin escorting Senators out to face the justice of the people; some of them at gunpoint. 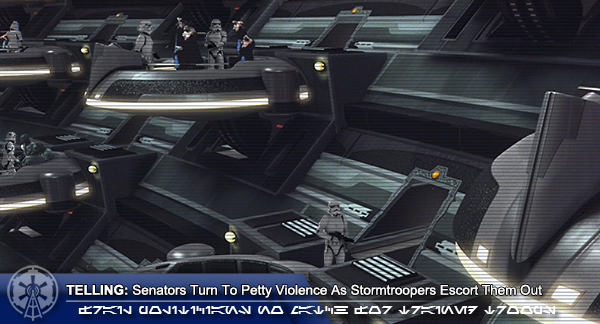 With exceptionally tight security, the head of the New Order left the former Senate building on a quick tour of a number of prominent landmarks where he took the time to speak to the local populace and hear their worries about the new governorship of their world. Addressing their concerns, the Emperor assured people the reign of the Galactic Empire would see only prosperity and peace appropriately loyal citizens. A message which was briefly interrupted by protestors and zealots of the collapsed Republican government, but the interruption was quickly subdued by soldiers of the 1st Legion with no reports of any Class A citizens from the altercation.

Escorted by former Chief of State, Galen Darksol, the tour of the ecumenopolis ended in the Senate District with a visit to the tax-payer funded Senate Residences. There, the Imperial contingent witnessed first-hand the extravagance and decadence in which the officials elected to protect their people lived, as mere streets away people struggled and starved in vermin-infested and disease-ridden hovels. Witnesses reported that even the stoic and collected Emperor was visibly distressed by the injustice with which he was faced. Aides close to the Emperor reported this only steeled his determination to see the last vestiges of the Republic Senate swept away.

Having concluded his business on Republica, the Emperor departed the world with a large element of his forces. Presumably to cause civil unrest, unidentified sources reported widespread riots in the wake of the announcement, with insufficient Imperial forces to quell the uprising for several hours. These claims were quickly dismissed by an Imperial spokesman from the newly formed Office of Imperial Integration under Grand Moff Inwe Ventidius. The spokesman cited isolated incidents involving misled youths and exaggerated press releases, and provided assurance that the Imperial Military is supporting local law enforcement bodies to implement a smooth transition away from the New Republic.