Ord Cantrell, Fath – The latest news from Ord Cantrell and the galaxy at large comes to you from an MK-series Maintenance Droid identified by designation Wheels-425 due to circuitry issues currently plauging Cheeto-A2. Under the restraint of the Cantrell Institute of the Arts, transmits intercepted communications protocols from within and around the Fath Sector to the wider galaxy. 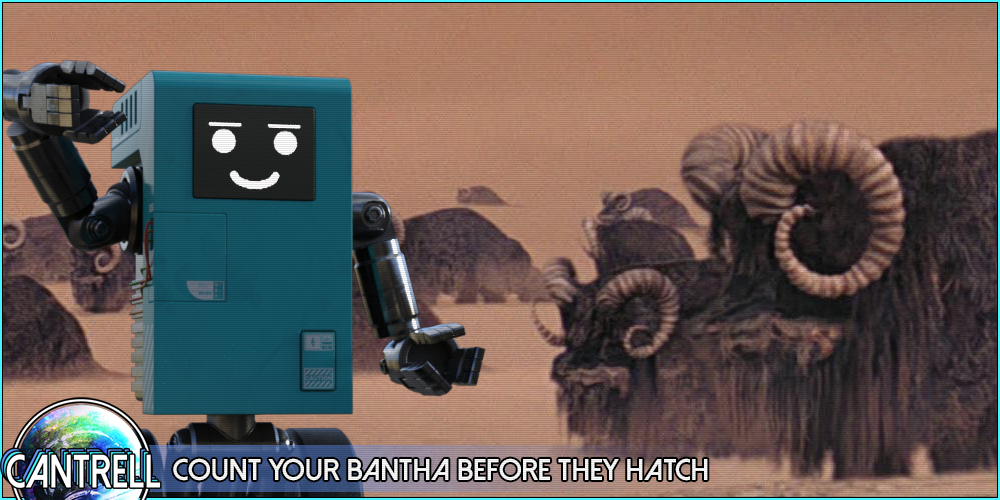 Embarrassment and frustration met officials orchestrating a public gathering on the outskirts of Bartertown on Ord Cantrell yesterday after an offworlder released several bantha throughout the streets. Footage appeared to show the offender releasing four, but volunteers were only able to round up and secure three banthas.

After several hours and repeated searching throughout the streets within the town and the outskirts surrounding, officials soon realized that there was never a fourth bantha. Instead, the offworlder had painted the numbers one, two, and four on the side of a corresponding animal. While the event was met with entertainment and laughter from those outside the event organization, it's been reported that time spent attempting to contain the creatures detracted from several key fundraising events, resulting in substantially lower financial support than the event had predicted.

While no charges were filed against the perpetrator, identified only as a minor of alien descent to protect the privacy and of the prankster, organizers have stated their intention to sue the individual for lost financial revenue. This gesture was met with resounding disapproval from onlookers and attendees who claimed the unintended animal incursion substantially improved the enjoyment of the event. It's believed Governor de Chatillon made a sizeable, private contribution to ensure a follow-up event would occur next year, with an additional pledge to purchase several banthas to tend the grasslands around Lorien. 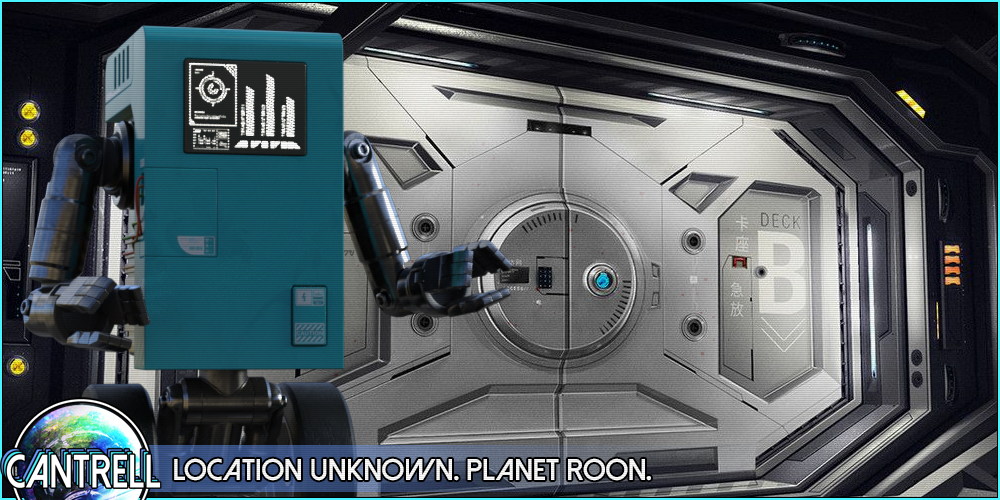 Neck Injuries have reported surged within the Abrion Sector

News emanating from the Abrion Sector has indicated that Roon, the Eidola Pirate controlled haven near Kamino has begun welcoming the long-necked species into its underground fighting scenes. Headlining as star attractions known as Kaminoan Cock Fights, generating substantial booking fees and gambling revenue for the pirate organization.

With many flocking from within and around the sector, medical professionals have seen a sudden rise in medical expenses coming from Roon, with many suffering from repetitive stress fractures and other neck-related injuries. Two individuals of Kaminoan descent were transferred to a medical facility with their necks tied together, an unfortunate issue with such an elongated race. Fortunately, one doctor is optimistic that all this activity is good for the medical profession. "It keeps me employed, keeps me busy, and keeps me away from Carl Warrington's sharp Chagrian horns. Plus, being Eidola, there are plenty of lubricants around to easily untie those aliens, so things really couldn't be easier."

While injuries are never an enjoyable experience, given the prevalence of neck injuries surfacing across the planet, state officials have begun an extensive leaflet campaign highlighting the risks and best exercises should such an injury arise. Unfortunately, despite many predicting that the state authority would intervene and end the fighting arenas, the profits for the pirates far outweigh any small pockets of outcry surfacing. At the same time, Resistance operatives appear to be more preoccupied with which insurgency has the best trident logo or color palette than deploy a security force from Kamino to contain the criminal enterprises.

At this point, I should stress that my controlling masters, the Cantrell Conglomerate, have no stance or opinion with the affairs of the Resistance or other Rebel-aligned organizations within the galaxy. Instead, my programming appears to have defaulted into a 'sassy' state, something no doubt maintained by my previous masters in the Unknown Regions.

Reports from the Unknown Regions have identified a vessel previously thought non-existent within the galaxy. While the information on the vessel is limited, it's believed based on intercepted Imperial transmissions that the ship was none other than a Venator-class Star Destroyer, a ship that's designs led the now highly utilized Imperial vessels such as the Imperial I-class Star Destroyer.

As galactic intranets observed a spike in data traffic, looking for any information around the Venator and its origins around the Csilla, Churnis, and Trilon sectors, in particular, other strange searches continued to follow. Transmissions seeking data around 'amphibious creatures' was also identified with one traveler catching a glimpse of what looked like a weird, Ewok-Esque creature piloting the questionable vessel. Transmissions around the event are rather distorted; however, my communications protocols were able to decrypt some of the information - "It...Venator? ...plan...unknown orig--. Veynom? No...furry...stra-" 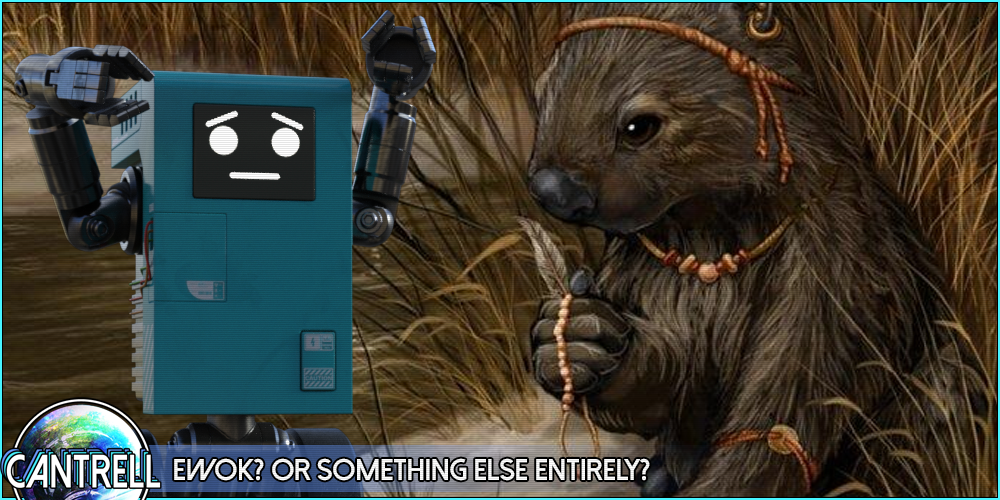 Cantrell Institute of the Arts officials will offer a financial reward to anyone who can shed additional light on the event. Based on the description identified in further communications, officials mocked up an artist rendering to help those frequenting the Unknown Regions identify this individual or thing. In contrast, it's previously believed that the Venator designs never proceeded toward concept or construction stages, with Kuat Drive Yards and Corellian Engineering Corporation deciding to focus on the more menacing Imperial I-class Star Destroyer and Victory I-class Star Destroyers. Speculation remains whether this was a hoax or a real Venator-class Star Destroyer. If accurate, how then did an apparent non-Imperial aligned, small alien could get its paws on such a vessel of power?

In a follow-up to last months' transmission, Cantrell Security Forces have determined that the vehicular accident that forced a Jawa to disrobe, suffering third-degree burns, was, in fact, an act of malice, with several additional cases now linked, classifying the perpetrator as a serial arsonist. In response to the article, numerous Jawa from across the galaxy have transmitted their physique to Cantrell communications channels, with several employees reporting trauma due to the explicit nature of multiple images. In addition, several employees have commenced an internal poll entitled 'Tickle me Jawa' to gather a growing consensus as to which Jawa would get the most credits at a Tortugan adult enterprise. 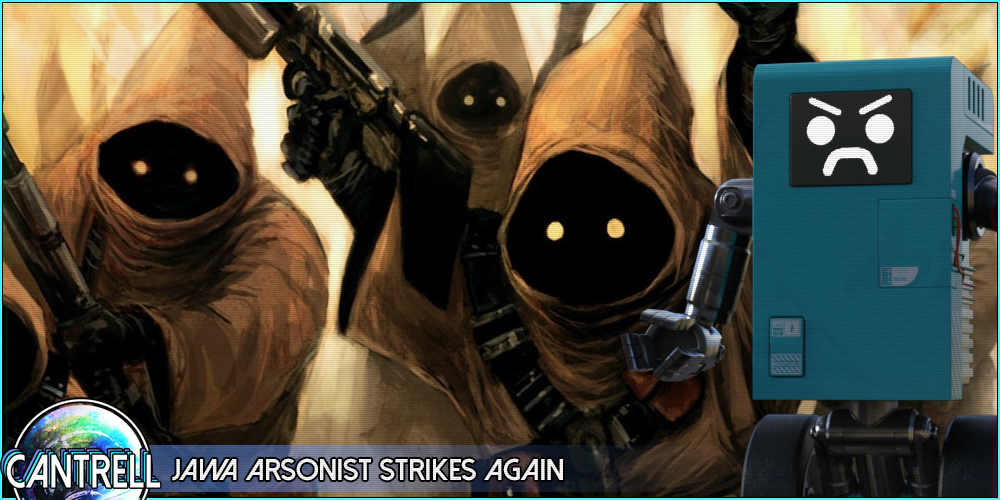 One order of Jawa, extra crispy

While little information has been made public about the status of the investigation, security personnel have made it clear that numerous suspects have been identified and treat the trade and commerce provided by the Jawa to be of high importance to the local economy within Ord Cantrell. "We treat the investigations into Jawa crime just as serious as any other. My wife is a fan of the furries, and I want nothing more than to come home and tell her that the perpetrator has been apprehended." Said a public relations agent, who was spotted with his head in his hands after realizing what he had just said publically being taken drastically out of context.

Kolomon Seph, Jawa and founding member of Jawa Offworld Enterprises, has been spotted around Upezzo Jubinloo making numerous public statements, calling for the blood of those who harmed their brothers. Several herds of Jawa have been seen hobbling around the cities of Ord, armed with various kitbashed weaponry, shouting phrases in the worship of the shamans of the Jawa Industrial Magi. "Perupa ogo bok kurruza gomjam!" and "Uttini echuta!" were echoed around the streets from the small squads. Security forces remain on high alert, intent on maintaining the security of the drunkards and dealers frequenting the planet.

Our final transmission comes from the technology department behind the Governor's latest holonet venture entitled 'Arty Tarty', advising users that various security features and confirmations to user data after an outcry from several disgruntled Ithorian's who stated they were duped by a user impersonating themselves as a Codru-Ji, a practice known to the galaxy as Loth-catfishing.

One depressed user identified as 'Ith0rny4n' sent a letter directly to the office of Artemis de Chatillon asking for action after his dreams of marrying a four-armed alien went up in smoke after their first date quickly turned. While initially skeptical, the Ithorian eventually realized that his date was a Coruscanti woman using painted Nautolan tails as fake third and fourth arms. Sprung and fearful that her true identity could be revealed, the woman was seen swiftly departing their agreed meet-up location, discarding the Nautolan tails into a receptacle as she exited. 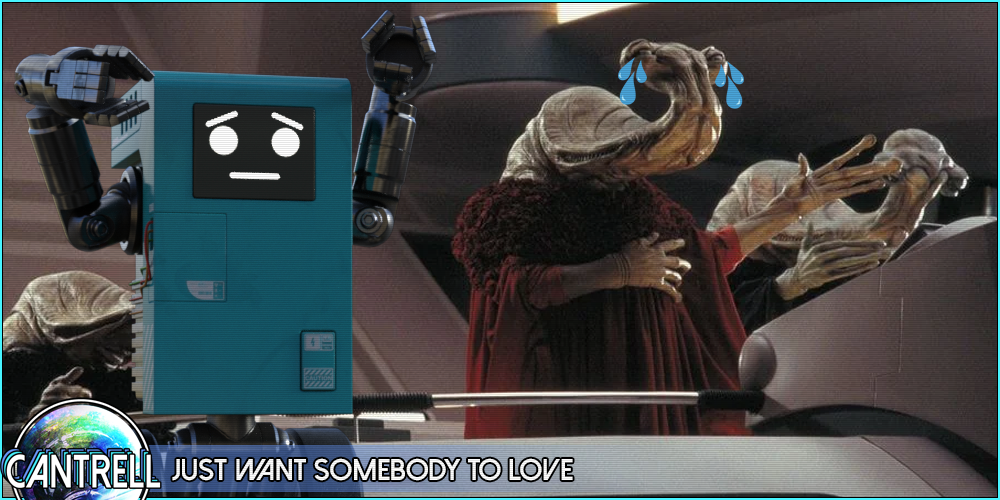 Governor de Chatillon was unavailable for comment on the matter. Still, internal discussions are reportedly being undertaken to address this growing phenomenon and what measures could be put in place to ensure the privacy of its users, but also a level of authenticity. Suggestions have ranged from blood testing, photography submissions, or diagnostics on the size of appendages inputting data to determine a general race. In the interim, the holonet program remains online for users to chase their lust of love across the galaxy.

This concludes our transmissions from and around the Fath Sector. Wheels-425 will now return to the maintenance of Cheeto-A2 until further communications are relayed.