The NZ 9118, also known as the N'Gant-Zarvel 9118, was created around the time of the First Galactic Civil War between two Rodian brothers. With the war looming around their home system of Tyrius, they decided to take common blaster carbine parts laying around and designed a heavy carbine blaster that the local militia could use on a moments notice. When the two brothers could not decide a proper name, they decided to use their first names in proper alphabetic order, with their militia unit numbers pushed together of ninety-one and eighteen, hence the name N'Gant-Zarvel 9118 or NZ 9118 for short. When the First Galactic Civil War finally arrived, the militia was ready to fight back against their oppressor and the reputation of the heavy carbine blaster was born.

The NZ 9118 had very unique features for its time, mainly derived from its durability and portability. Most heavy weapons at the time were so large that storing them was difficult, along with long setup times to ensure their operational status. The difference was that the heavy carbine blaster was smaller and much easier to store, only requiring a power pack to be inserted on the left side before being operational and can be used by a lone gunner. The weapon has no stun settings, instead having three blaster settings: single shot, burst-fire and full-auto which can drain the entire power pack within about ten seconds, though it could optionally be hooked up to a power supply in case of emergencies.

The durability of the NZ 9118 has been noted to be the result of pure Rodian technology. Being a warmongering race and the two brothers being former bounty hunters, they made sure the design was as simplistic as possible. The stock could be removed with a small tool, while the main barrel was in two pieces that could easily be replaced. The first section, known as the main barrel, connected with the power pack and featured heat vents around the barrel to prevent warping over long periods of heavy use. The second section, known as the secondary barrel, would begin to warp over extended periods of time and was easily interchangeable during combat operations, with most gunners carrying two spare barrels for long deployments.

After the defense of the planet Rodia, the two brothers were found in the middle of a bidding war between multiple contracting companies to mass-produce the new NZ 9118 heavy blaster carbine. In the end, the two brothers sold their design for a hefty sum and quietly retired to their families after the war. The heavy blaster carbine can be found in almost every military and criminal organization across the galaxy. To most, the sound of the loud iconic thumping noise is more than enough to cause people to take cover, while others can merely flash it from under their coats at a local meeting to dissuade others from potential violence. 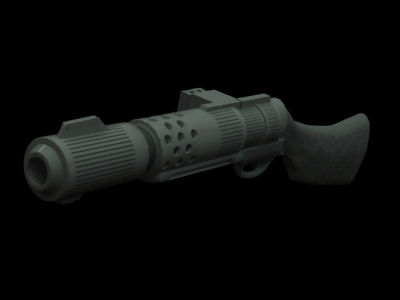