Oh, ok. I haven't found any yet :( .Oh well, maybe someday. Other than that, I have no information.

If you have seen a gravity well bigger than a single square and without spotting any planets, then I'd say you've ran into an active interdictor.

If that's not the case, you should make a bug report.

Well, I'm in hyper away from the site. I got back into hyper as soon as i sublight-ed out of the gravity well. It was a lot bigger than 1x1, more along the order of 3x3, at LEAST. Anyways, hope it gets cleared up. Someone said they were going to go check it out though, so maybe he'll turn up an answer for us :)

Without even having gotten there yet I glanced at my destination as you gave me: 141,-152 and it gave me this:
System: Spica
Sector: Dufilvian
Coordinates: (141, -152)

A very active, very public system. And you said you were ripped into deep space...?

I confirmed it was (141, -152) a.k.a. Dufilvian. I mentioned it to one of my superiors in TSK, which as you know works closely with FF, who own the system. All I know is that, when I was ripped out, all I could see from the cockpit in the Bayonet was empty space, but when I undocked in my ETA 2, everything showed up, EXCEPT for something in the middle of the mystery grav well. That's ALL I know.


UPDATE: Having just checked in again with my superiors, I have been informed that, most likely, it was an interdictor. I have been told that there are about four in the Spica Sector, at last count.

Nothing in system besides a ton of MC80b's under construction. I'll be checking out the deep-space coordinates just bordering the system.

I have discovered a spatial anomaly caused by the magnetic fields being produced by an Interdictor!


Having arrived at 141, -152 and encountering only the normality of the Spica System, I turned my attention to the bordering deep space coordinates.

My first journey conjured only that - deep space. However as I made a hyperjump to the alternating deep space coordinate on the other side of Spica, I was ripped from hyperspace only to emerge into deep space which both entrapped me in a gravity well but there must have been a patch of anti-matter as my ship itself ceased to appear on scanners!

I could not see anything around me and I too was non-existent!

Well, not being able to make a jump into hyper I engaged my sublight engines in an effort to escape from whatever spatial anomaly had me trapped!

The sudden particle emission from the engines must have caused a cascading failure of the anomaly's hold over my vessel as I immediately reverted back into the Spica system, and within spitting distance of a powerful Imperial taskforce! 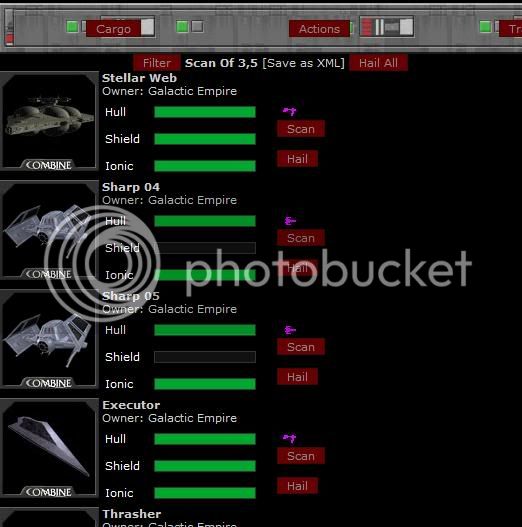 My theory is that the Interdictor's gravitational influence is somehow being altered by the presence of objects of great mass nearby (the SSD) which is causing a matter/anti-matter distortion.

I do hope the Falleen Federation is assessing the possible health hazards of this! Also the GE might want to test its crews for possible health side effects of such proximity to such a large anomaly.

Ok, that's weird. That screen is exactly what I saw. Nothing, absolutely nothing. As soon as I got into my ETA and engaged sublight engines, I was instantly back in Spica. I did not notice any Imperials, but I was not looking for them. Perhaps it's just a bug.

Must be a bug the GE knew about and was exploiting to hide their presence and capture all of us alive! They are a witch! Burn... her? Oh I give up. Probably just bug base and we can all move on with our busy little lives.