Hey everyone, I have a question to ask. I'm on Both because it's a quest planet, anyway I went to the part of the planet where the quest should be and I'm stumped. I went around town and talked to different npcs and nothing. I gotta add the area is filled with security droids, which is a bit funny but yeah. So any help?
Thanks

The answer is simple. You can't start any quest here nor anywhere else. There aren't any static quests available yet, everything is still in development.
There were two exceptional quests with voluntary participation made some time ago. Everything you can do now is read about them in GNS articles.

Only you can visit B`omarr monastery on Tatooine, there you can speak with some B`omarr monks and you will receive a brain jar I think. 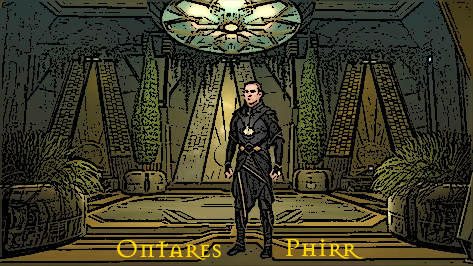 How to Start a Quest
Mes El-Zan

Thanks for the help.
A friend of mine suggested that I got out and do quest so I assumed they were added in the game.

How to Start a Quest
Ylvia Skelgard

Anyone can make a quest - just learn some LISP scripting.

How to Start a Quest
Mes El-Zan

First I got to learn what LISP scripting is before I can learn how to do it.

(Can't find the emoji but two hands gun with a wink (I think)).

How to Start a Quest
Kay Dallben

If we define it broadly, literally everything you do in SWC is a kind of Quest.

I'm currently on a Quest to distribute a network of satellites, for example. I have hired people in the past for a Quest to go fetch some ship or vehicle that I own and bring it to me. I've assisted people on their Quests to obtain ships stuck beneath the shields on a moon I have access to. I know people whose Quest it is to gain more experience and so spend their time Hunting. ...

I'm one of the most experienced with SWC's brand of LISP (a programming language), so trust me when I say the hard part is coming up with anything reasonably compelling and timely for the varied audience that is SWC. Worry about the programming later, if at all. A lot of people don't have the patience to program these kinds of things, especially without first having a clear plan in place. Plus, all the Player-driven quests will still need to be supported by Players verifying real Darkness conditions (like handing over an item or flying a ship somewhere, or killing X bandits) and distributing the rewards. The Scripting language provides the means to invent your own mechanics/Rules for your quest, and your own set of rewards, which may or may not be 'valued' by the rest of SWC, but it's whole point is for entertainment value, not for the magical creation of assets. Telling your stories your way is the SWC-LISP's power for the Playerbase. Admin-scripted quests can tie into the game-engine as well, to create obstacles, goals, rewards, and change things with the actions of players.

My advice is to figure out a story that you/your friends would like to act out, write it out in full, then go back and identify decision points and write branches to create alternate timelines. "If Such-and-Such Person did this, how could it turn out differently, etc." Write the actual interaction(s) first, and test it out as a choose-your-own-adventure with your friends by running it manually - DM them bits and pieces, do it over Discord/chat. I'm sure there'll be revisions, but then you get closer to a good product that you can share with others.

If you're just looking to Do something in Darkness, then let your imagination be your limit! Build some narrative surrounding a bunch of actions in Darkness you can do - like flying to an unshielded but Hostile world and trying to find an item out in the open somewhere; or locating one of the ships mentioned in the "Looking for Owner" threads; or infiltrating a faction, gaining their trust, and doing something nefarious like stealing, kidnapping, selling information, or free captured characters/NPCs.

How to Start a Quest
Weylin vi Cron

I'm disappointed that no one responded for him to bring them a shrubbery.

As people have said, there aren't really any active quests (as in game-client missions) running. The staff may do more quest events later on though (and we know they've been planning Force-related quests for a while).