How to survive your Swap experience
Hacked by: Siarica Aylina, Empire of the Hand
Date: Year 20 Day 114 Onboard the Namana-class Light Cruiser GSS Trafalgar in system Malastare (78, -257).

Twice a year, thousands or organic and mechanical lifeforms are congregating towards a single planet, in order to attend the largest culinary event in the whole galaxy. Originally named the "Swap Meet", the tender, juicy, lightly roasted play of word eventually made its way into recognition, and this week Malastare is opening its shields to host the popular event.

The Swap Meat can be amazing, but overwhelming. In order to help you make the most out of the trading extravaganza, we contacted 113 traders, and gathered their specificities in the following brochure - Take one, it's free! 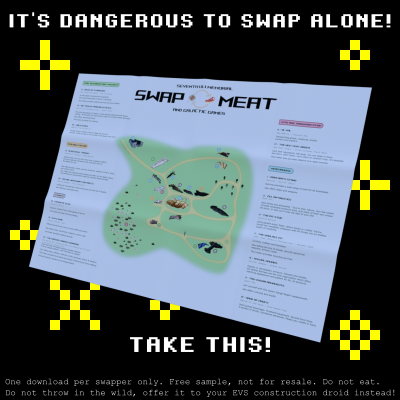 How to plan your visit

If you intend to fly your own ship, the Swap Meat is located on Malastare (Malastare system, Dustig sector), in the open fields south-east of Pixelito. If you prefer to take public transportation, the Swap Meat is accessible by foot: Upon arrival, leave the starport by the entrance next to the shops and head towards the hospital. Once you have crossed the hospital, turn to your left and walk away from the city, toward the Bulk Freighter in the distance - It's Rancorp's stand, the closest booth of the Swap Meat!

Once at the meat, you will find numerous booths offering beverages (mostly alcoholic), but don't worry, Mag's Place is the way to go if you're hungry! And if you feel tired, your best option is to head to the improvised camping spot set by the New Tent Order, and rest in one of their 5,700 tents.

Once you'll have met new people and acquired new assets, you will perhaps realize your ship isn't large enough. In that case, don't hesitate to hire a reliable transportation agency! Ol'val will transport your goods, creatures, droids and people. Mention this brochure, and get an extra 5% discount for her services!

The Swap Meat is a large event, and like all large gatherings, it may also bring some nexu in nerf hides. If you can't believe your eyes at this too-good-to-be-true deal, then it's most likely a rotten gizka. You may at best end up with an out-of-order antigrav, an outdated model, and at worst you will spend your credits but will receive nothing in exchange. This practice is called a scam, and some people are notorious for it. Make sure to have an up-to-date list of these people (called scammers), and if you have any doubts, don't hesitate to ask for a middle! These reputable traders will act like a mitten when you wish to pull a plate from the oven: you send your credits to the middle, and the trader sends the goods you're willing to buy to the same middle. Once the middle have received both the goods and the payment, he will send you the goods, and will give the payment to the trader. Most middles are offering these services for free, but a tip is always welcome.

The Swap Meat also hosts the Great Hunt - Many fearless hunters will try to bring the most prestigious trophies, showing their worth. If you are not a hunter, be careful not to be mistaken for a prey! Avoid wandering outside of the Swap location, and if you wish to do so, please wear bright colors so the hunters will easily spot you, reducing the risk of getting accidentally shot like a running fambaa.

Last but not least, be extremely careful - Some vicious individuals don't hunt animals, but sentients! If you don't know someone, don't board his ship or vehicle! At best they will be upset, but the most likely outcome is that they will capture you. If you happend to be captured, your captors might enslave you, ransom you, and perhaps even kill you in nasty ways. During the past events, people have been mashed into a pulp, their eyes gouged out, their elbows broken, their kneecaps split, their bodies burned away, their limbs all hacked and mangled and their heads smashed in and their hearts cut out and their livers removed and their bowels unplugged and their nostrils reaped and their bottoms burned off. Never board anyone's ship if you aren't willing to spend the rest of your life with this person.

You're now all set for enjoying this year's Swap Meat! Trade well, meet amazing people, and don't forget to have fun!

The Swap Meat is backed up by the Garlic Alliance, a sponsor which will most likely bring tears to its arch-rival the Imperial Onion.