Despite its only recent relevance on the galactic scale due to the holiest first pitcher Fleuf Naze, the New Tent Order is an ancient religious organization. According to the Order's beliefs, tents are an item of divine power, giving shelter from the wrath of God and allowing his followers to commune with him from shelter. This viewpoint has been met with great controversy, with many assassins having tried to murder the controversial first pitcher. Regardless, the New Tent Order has continued its mission to bring enlightenment to the masses through tents. 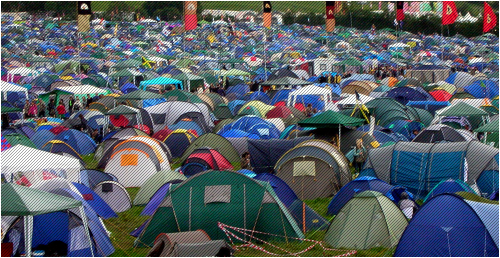 Enlightentment being brought to the masses!

The Order has pursued its mission in several ways, each of which were deemed some form of "Galactic Tent Crusade." The first Galactic Tent Crusade took place at a past galactic swap meet, when the first pitcher identified tents that had been incorrectly pitched and confiscated them for incineration. The tents were claimed to be abominations against pitching, and by leaving them in place they were dooming potential users to eternal suffering from the elements, with no tent in which to find shelter. This was a highly controversial crusade, with the first pitcher gaining a number of bounties on his head due to this event, but it was ultimately a remarkably effective means for the Order to reach the masses on a budget.

After that came the second Galactic Tent Crusade, during which the first pitcher began his journey to remove many of the higher profile heretics from the galaxy. Despite only being linked directly to the death of one member of Dha Werda Verda, a prominent openly anti-tent organization, the first pitcher proclaimed that it was only due to the direct intervention of the tent god that many other members of the organization died and it eventually dissolved. He deemed this to be an example of the rapture that will ultimately befall the galaxy, and that the people must obtain tents if they are to survive it.

The third Galactic Tent Crusade was to make shelter possible for the masses. The needs of the galaxy with regards to tents had far exceeded the ability of the great pitchers, so the first pitcher went out to the masses and tried to spread the divine knowledge of tentmaking and pitching through the registered tent-seller program. This was once again met with great resistance, but a number of devout corporations were brought onboard, notably Jaereed Welk's Blue Star Enterprises. 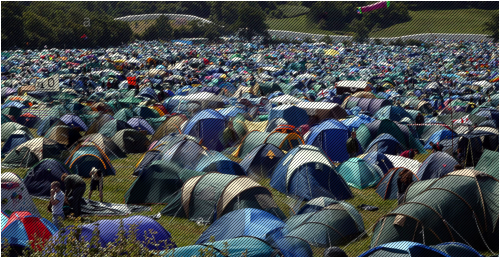 Don't forget what we're fighting for!

Now Fleuf Naze, the first pitcher, the highest rank of the New Tent order, has declared a fourth Galactic Tent Crusade, the great pitching of the Maw. The New Tent order has declared that the souls inside the Maw are not lost, but rather desperately in need of shelter with their ships having been torn apart. This transmission is being sent out moments before the Great Crusade, where tents will be distributed and personally handed by the first pitcher to those trapped in the Maw. According to the Order's tenets, nowhere is safe from the rapture, and everyone needs shelter to escape it, even in the Maw.

Fleuf Naze had the following to say: "I am the first pitcher, Fleuf Naze. Savior of the galaxy, pitcher of tents, acolyte of the one true God. I compel all of you who are devout to join me, come with me to the Maw, and bring tents. We shall cover these black holes in their entirety with tents if that is what it will take. We shall bring salvation to the people of this system. I have undertaken a great task, a task that may cause the New Tent Order to lose many lives. That is a sacrifice I am willing to make. Long live the tents!" Additionally, instructions on bypassing ships' onboard computers' "safety" systems, which prevent flying blindly into black holes, were sent out.

It is unclear how many of the first pitcher's followers will obey his commands, but at least sixteen of his most devout disciples were reportedly onboard his ship, eager to assist in the great pitching. Additionally, it is unclear which black hole in the Maw will be visited first, but it will surely be a blessed day for them as the souls of those trapped within receive shelter. 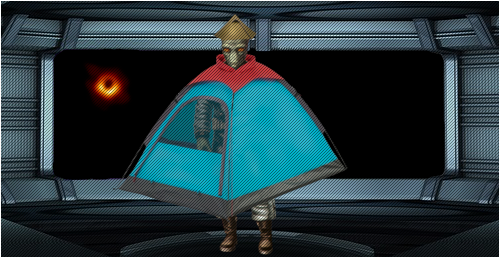 Fleuf giving the call to crusade!

Fleuf Naze and other followers of his in the system were reportedly able to gather detailed information from their sensors regarding gravitational pulls and other anomalies typically associated with black holes. After transferring this data to a local Xucphra station, the New Tent Order was able to map out the location of all twenty black holes in the system, to which devout members of the order are encouraged to take their tents. 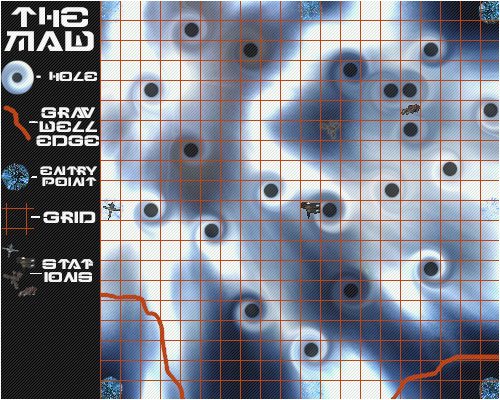 [Main Page]
Events in Brief
Year 23 Day 265: Arturia Paorach, the leader of SoroSuub Resources was replaced today by Duthel Drolve.
Year 23 Day 263: The Gordian Reach Authority has found it increasingly difficult in recent times to maintain control over the remnants of their original planets. The high council convened and have decided that as their current situation cannot be rectified, they surrender sovereign authority over the planets they control, and assume the status of a Manufacturing group.
Year 23 Day 263: A new treaty was established on Glom Tho today between governing officials and diplomats from Zann Consortium; these documents formalize the transition of power to becoming a protected territory of the government, a move largely embraced by the citizenry.
Year 23 Day 263: Rather than fall in line with Zann Consortium's recent requests, Glom Tho issued a release today announcing that they have formally accepted the more conciliatory terms of a planetary body, and have declared Zann Consortium a criminal organization on their planet.