Ever since the invention of the hyperdrive, the galaxy has become a much smaller place. It changed how we do business, how we wage war and broker peace, how we trade goods, and how we travel from place to place. However, the one thing that has never changed is gravity, the building block of the universe.

Gravity dictates when and where we can travel through hyperspace, there are even rumors of ships capable of creating artificial gravity wells simulating that of a gas giant. When it comes down to it, gravity is ferocious. The true ferocity of gravity is embodied in the nightmares of navigators and smugglers: a black hole.

There are numerous black holes that pepper the galaxy. Several exist at the center of our own galaxy, while some even exist in planetary systems like the Pits of Plooma, which form a delicate dance with the Plooma sun and three terrestrial bodies. Some have been caused terrible acts of war, like that of the Great Sith War where the destruction of all planetary bodies in the Cron Nebula were destroyed by the Sith, leaving behind five black holes and twenty five asteroids. 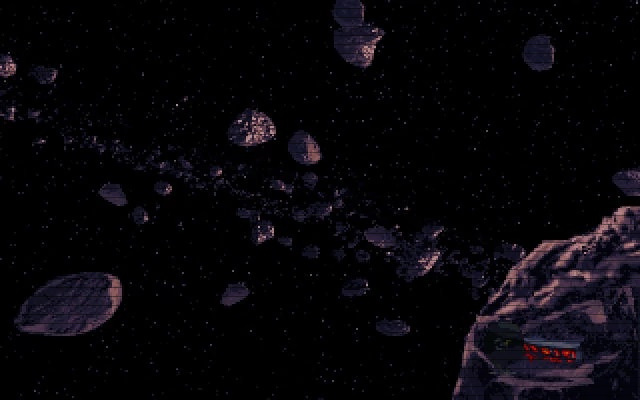 A portion of the asteroid field of the Cron Nebula.

All that considered, the most legendary and most destructive instance of black holes is the cluster of black holes located in the Kessel sector. It is the graveyard of ships, navigators, religions, and resting place of the legendary Pirate Queen Teniel Djo. It is the Maw.

The Maw, located almost adjacent to the Kessa system, is a wonder of the galaxy. It is a cluster of twenty black holes that few have visited voluntarily and even fewer have left alive. Strewn about the "system" are chunks of capital ships, lifeless escape pods, and other debris. Nestled in the center of the cluster is the aptly titled Maw Research Installation which, despite its remote location, is surrounded in legend. Currently, the station is shut tight and scanners have found zero signs of life inside, but stories about its origins and its purpose circulate in taverns all across the galaxy. While its name states its general function, no reliable accounts state the goals or findings of the research. 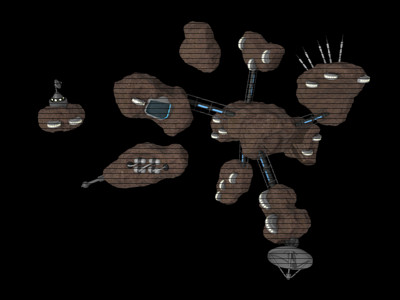 Nevertheless, there are some functioning space stations located there, built for secrecy, sanctuary, or science. To some, the Maw is a perfect place to hide from the galaxy. There are at least two known cloaked hideouts in the cluster, and the Smuggler's Guild owns a Luxury Space Colony just south of the abandoned Maw Research Station. Its doors are shut tight, only opening to the most exclusive guests or trade partners. When asked for their opinion on the Maw, they responded "...it's symbolic of all the traits one must possess: the bravery and perhaps even the recklessness, to put your life on the line, the cunning and ingenuity to outwit the authorities and the resolve to see any job through to the end. It's a badge of honor to make that treacherous trip and something that will definitely lend some space cred to anyone who completes it." When asked about their space station they said, "[the station] is rather like a testament to everything that we in the Guild believe should make up a smuggler [...] the Maw is the region of the Galaxy most closely associated with our trade, we're proud to have our name right in the middle of it!"

Finally, the Maw is a place for scientific examination and study, and recent research initiated by Xucphra Medical has hypothesized the potential of using black holes as a source of renewable energy. In fact, they have already set up a Syphon-class research station adjacent to three black holes with the sole purpose to research the behavior of the phenomena. Additionally, their station serves as a safe respite for lost travelers to refuel and get their bearings. 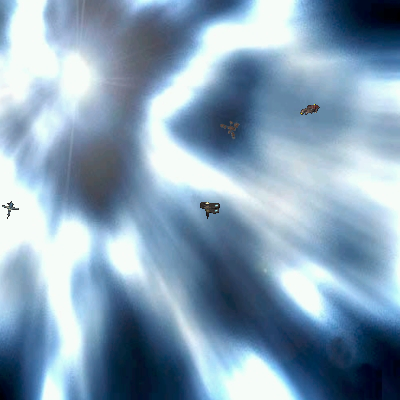 Just recently, First Pitcher Fleuf Naze of the First Tent Order collaborated with Xucphra using his sensors in tangent with Xucphra's to map the entire system for religious reasons. Given the strength of Xucphra and the First Tent Order's scanners, Xucphra can affirm with 95% certainty that the map of all twenty black holes is accurate. This achievement opens dozens of new avenues for research and other endeavors for the galactic population at large. Unfortunately, Mr. Naze has not been in contact ever since he released his own statement just a day ago. Whatever his fate, his bravery and conviction has aided the galaxy in a way unique to any other. Read more about his endeavor here

Gravity has fueled everything in our lives since civilization began, and the advent of interstellar travel has shown us all a myriad of fascinating places and wonders that were once just legend, murmurs in the back rooms of taverns and science labs. The Maw, one of the most well known places of gravitational danger in the galaxy. The brave, bold, and enterprising spacers who navigate it are seen as masters of their trade. Now that the system has been mapped entirely, we know that any citizen of the galaxy can contribute to the ever-growing compendium of scientific knowledge. The dangers of the Maw are very real, and the extraordinary accomplishments surrounding it will never lose their significance. Now, more than ever, this legendary beast is worthy of real investigation.