It has been claimed that the 32nd Mushroom Mesa shamanic prophecy of the Thiko clan, first uttered roughly 5,000 years ago, predicted the recent hostile takeover of the New Tent Order by the Jawa Industrial Magi (JIM). One interpretation of this prophecy seems to imply that Jawas would find the future of their religion through the destruction of tents, which is very similar to the takeover that JIM performed a few days ago. However, many Jawas disagree, claiming that the prophecy is misinterpreted or altogether invalid. This article will hopefully help clear up this complex issue for those less versed in sacred Jawa texts. 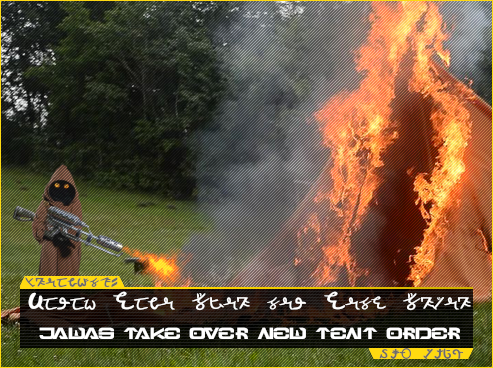 The Jawa hostile takeover of the New Tent Order

This controversial prophecy was first uttered by the third prophetic shaman of the Thiko clan and was passed down orally until the sixth prophetic shaman, who recorded it in engravings on the Thiko rocks of prophecy. These were passed down to the Majko clan, who lost them during a Tusken Raider raid, but this engraving was recovered by the Ptek clan half a millennium later. The Ptek clan then rerecorded the prophecy on five separate slabs, kept one for itself, and distributed the other four to allied clans. This proved to be a wise move, as the original slab with the engraved prophecy was destroyed during the time of human miner settlements. Only one of those slabs has survived until today, but as a more popular prophecy it has since been recorded in many datatapes and scrolls.

The prophecy reads, "Kurruzza nyeta cirkoza ashuna go ayafa ogo!" This is traditionally translated, "Through depreciation of moving fortresses, the prayers of the clans shall be answered as they achieve more." This original translation was historically viewed as predicting the arrival of the miner colonies that would bring sandcrawlers of which Jawas would, in time, take possession. However, like most Jawaese, it is heavily dependent on context that is normally transmitted through Jawa pheromones, and this cannot be recorded adequately in written Jawaese. This has led many to questioning if it instead may have meant, "Through destruction of tents they will take the religion of Jawas to the galaxy." If this is true, it would mean the hostile takeover of the New Tent Order was predicted roughly five millennia before its occurrence.

One significant reason for this new translation is due to a disagreement over the translation of words for "tent"/"moving fortress" and "depreciation"/"destruction." The major reason why "tent" might be the correct term is that tents already existed at the time of prophecy, and that available word choices in the Thiko dialect of Jawaese would allow for a much more precise description of a sandcrawler. Additionally, the Thiko clan, like many western Mushroom Mesa clans, was known for poor financial records, and the use of the word "depreciation" would be uncharacteristic. 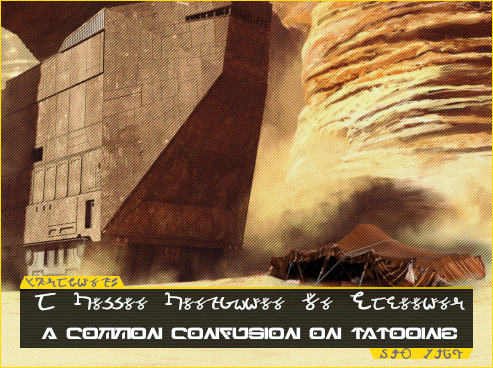 However, those supporting the traditional translation bring up the rerecording of the prophecy. These traditionalists state that the prophecy was very likely not recorded word-for-word by the Ptek clan and instead may have taken on the nature of the Ptek dialect. The Ptek clan up until its destruction was known for their financial skill despite their seemingly simpleminded speech and vocabulary. This would explain the dual use of the words for "tent" and "sandcrawler," and the inclusion of the word "depreciation." Additionally, the traditionalists claim that any pre-mining settlement prophecies would likely not have referenced the galaxy, as it was uncharacteristic of these prophecies to reference anything outside of Tatooine.

Additionally, many question whether this prophecy is even a valid prophecy. The sixth prophetic shaman of the Thiko clan that recorded this prophecy boasts a remarkably low number of prophecies for a prophetic shaman with only three recorded prophecies, all of which were vague utterances related to the success of the Thiko clan's Hubba Gourd crops. Additionally, the Ptek clan that rerecorded the prophecy did not just freely donate the four slabs to other clans, but rather sold them for a hefty profit. The clan is suspected of completely fabricating a number of religious artifacts that they sold, including vials of water from the Dune Sea, the famous engraving of the 54th great Jundland prophecy, and tens of thousands of bones from the skeleton of the first Jawa shaman. This leads to many questioning the legitimacy of the prophecy, regardless of its translation.

However, some are more optimistic, and even purport that both translations can exist in unison. The 22nd Waldo Flat proclamation stated, "The great one is efficient in his actions, expending no more energy than is required, like all mechanization should." This would imply that it is possible for one prophecy to actually carry multiple meanings as it is more efficient. However, many are wary to treat this as a valid application of the 22nd Waldo Flat proclamation due to the implications and complications this would have on many previously believed to be "solved" prophecies.

Undeniably the best religion to find galactic importance in the past seven days.

All of these 4 different views of the prophecy have found some form of acceptance among religious Jawas who are a part of the Jawa Industrial Magi. Unsurprisingly, most of the Jawas involved in the takeover of the New Tent Order support the new translation in some form, believing it either to be a second meaning or the sole correct meaning. However, the Jawa Industrial Magi have made clear that this is not a critical prophecy, and as such the interpretation of it believed does not affect ones standing in the organization. However, some individual sects, specifically sects with shamans who descended from the Thiko clan, require followers to believe in the legitimacy of this prophecy, regardless of exact interpretation.

[Contribute to the cause]