Aldasec Mathai, once a kidnapper himself, left his pirate ways behind him to create Chaos Defense Systems on Year 20 Day 94. An allegedly legitimate organization, Chaos made assurances to prospective clients their goal was to provide security for merchants and freelancers to stop villains as he had once been. Using the minimal knowledge he received as a marginally successful knave before retiring, Aldasec exploited client fears of unlawful arrest and potential for kidnapping, assuring them all the best defensive measures.

However, the mask of the Chaos Defense Systems quickly came off revealing a different face when conducting business in the Outer Rim their leader Mathai received the sum of 200 million credits meant to be returned to Zann Consortium in a business deal gone sideways. Resorting to his old ways, Aldasec refused to return the credits to Zann Consortium and challenged the crime syndicate to dare cross him. A mistake which cost him his life only one week later.

Working undercover not wearing his traditional Defiler armor or helm, or using anything identifying himself as a Consortium agent, the clever Seth Haze slipped quietly into the Defense Systems home planet alone where he was able to spring a trap on Mathai who had been celebrating what he believed was a victory over Zann. Tracking him to a local tavern in one of the many cities, Seth waited for the unsuspecting drunken Aqualish Aldasec to exit and then ambushed him. 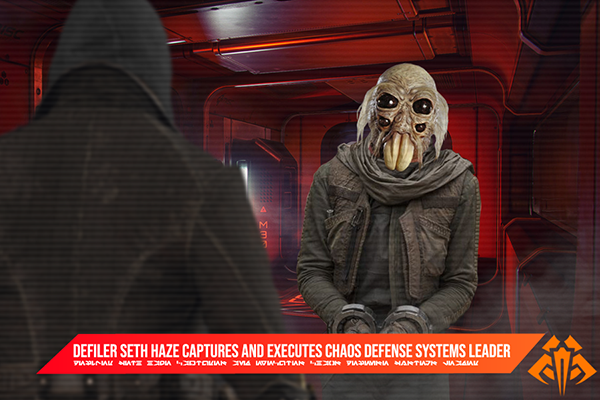 "When this happened, we gave him every opportunity to simply return the funds, but Aldasec felt he was untouchable. When I spoke with Ximaro, he gave the word to bury him with the credits. So we made an example of someone else, reminding everyone if you cross us and drop your defenses... our people are virtually everywhere. We can get to you." Kyota Navic, Zann Consortium Second in Command stated firmly.

Ximaro Jix, Crime Lord of Zann Consortium, was unavailable for comment as Zann sources showed he along with his personal Bvyek Defilers were among Car`das Smugglers for reasons unknown.