It is a sad fact of life that the galaxy is not a well oiled machine. Instead, it is filled with suffering and pain. Because of this, the Jawa Industrial Magi have announced the opening of a galactic orphanage, for any parentless or abandoned children regardless of species. However, this announcement has not been without controversy, with many Jawas questioning whether this is something in which Jawas should be involving themselves. 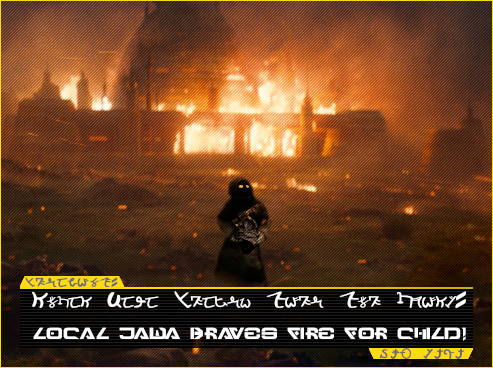 The orphanage appeared to have been inspired from the dashing rescue of an unnamed infant by a magon, a member of the Jawa Magi, called Azbiz Toze. Azbiz was reportedly in the area during a fire at an apartment complex on Homon, and heroically rushed in to save whomever and whatever he could, which was unfortunately only this lone Baragwin child. This story naturally spread through Jawa communities and brought the plight of orphans around the galaxy to the attention of the Magi.

Traditionally, on Tatooine, orphans would follow the extensively codified regular inheritance laws of the Jawa culture. However, it quickly came to the attention of the Magi leaders that many of the more uncivilized cultures around the galaxy, such as those developed by the humans, had no clear code for what occurred to children upon the death of the parents or abandonment of the child. This has led to an alarmingly high number of children throughout the galaxy having no clearly defined individuals to give them a purpose.

This situation seemed to almost be directly referenced by the 56th divine declaration of the Hubba Heights, "You shall find a use for that which is left unused." With all these children left to wander, it was decided by a number of sect leaders that something had to be done. This has led to the renovation of the Lictor-Class Dungeon Ship "Unforgotten" in order to serve as an orphanage, with the prison cells being repurposed to serve as bedrooms for the orphans from around the galaxy. Additionally, the areas for prisoner exercise have been altered to serve as rooms for educating the orphans in important skills such as droid repair. 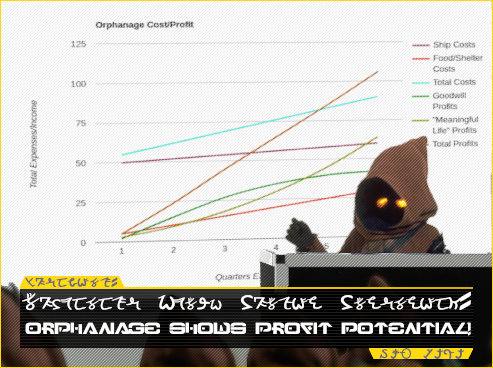 This decision was aided from the supposedly significant profits from running an orphanage.

Jawa economists have also weighed in on the concept of running orphanages and the profitability thereof. Noted religious Jawa and economist, Nbak Ptek, spoke out in support of the orphanage, arguing that there would be long term benefits that greatly outweigh the costs. These benefits may be largely intangible, such as improved relations between JIM, the Jawa Industrial Magi, and many local governments; however, it is estimated that this will greatly boost the potential tangible profits from other operations.

This move has still been met with great criticism from other Jawas, who argue that future profits are irrelevant compared to current and immediate profits. Notable droid trader, Veega Tesehek, publicly came out against this type of investment, arguing that the 7th vision of the 15th great shaman of the southern Jundland Wastes is divine proof that Jawas should not engage in this kind of behavior. Instead, investments should pay themselves off in under a week to guarantee that the profits can be enjoyed, and that people can gain that kind of profit by purchasing his crazy low priced droids as an investment.

However, forecasts have shown that very little cost will actually be incurred by the orphanage. As a part of the "Meaningful Life" program, the orphans will be involved in the operation of the ship as well as in the ongoing business operations occurring onboard. This program, thought up by notable middle manager, Tilba Ugama, would enable the orphans to both earn their place onboard the ship and gain useful life skills. While it is unclear just how successful this will be, it almost certainly should cover the costs of the rations and blankets for the orphans. 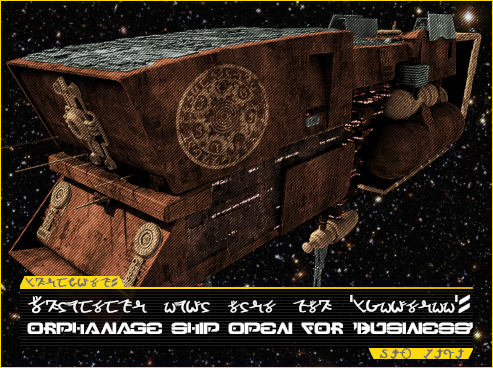 The "Unforgotten," a spark of hope for the hopeless.

Regardless of the exact financial situation, individuals who are unsure what to do with any abandoned or orphaned children, Jawa or otherwise, are urged to bring them to the Lictor-Class orphanage ship "Unforgotten," or to any traveling Magi sect that supports the initiative. Exact numbers of open beds for orphans are not currently available, but it is expected that several thousand children will be able to somewhat comfortably sleep aboard the ship.

[Contribute to the Magi]