By Jawa tradition, any battle is not over until all the dead are buried, all the living are safe, and all the salvage is secure or sold. With the completion of the last of the Jawa salvaging at the battle of Nimban, a period of reflection on the battle by scholars and critics has begun, but so has a period of rejoicing in newfound victory by the masses. However, due to a media blackout by many organizations due to the sensitivity of military matters, many Jawas have been left questioning what exactly occurred and what happens next. For those already familiar with the recent battles between rival scientific organizations, skip past the battle footage to read about the fate of the salvage and the impact it is having on Jawas. 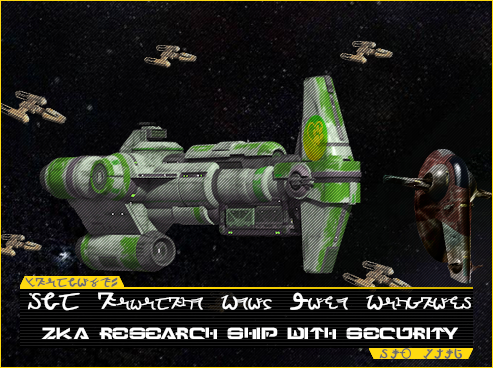 Research ships guarded at all times due to tensions

The naval battles at Nimban and in a number of other systems were the result of the growing tensions between the scientific research organizations “DNA Bashers” and “The ZooKeeper Alliance”, with accusations of tampering with research and outright theft being made about both sides. With the increasingly militarised convoys escorting the scientific research vessels to attempt to limit the hindrance of ongoing research, it took only a small spark for an all out war to start. While exact numbers cannot be determined, it is estimated that tens of thousands of fighters were guarding the convoys when combat broke out, and many more showed up after it began.

Actively assisting with the security and research of the ZooKeeper Alliance, a significant portion of Jawa Offworld Enterprises' military and research arms were present in Nimban, in what was described by onlookers as “A display of friendship and charity that was only due to the promise of droids for the opportunistic Jawas.” As combat broke out, the Jawas were some of the first on the scene to prevent the destruction of ZooKeeper forces and the possibility of valuable research falling into enemy hands, as well as to guard lifeboats filled with ZKA researchers attempting to escape the conflict. Additionally, as the battle grew less intense, many Jawas were seen trying to secure the spoils of war, attempting to get as many ships out of the heat of the battle as possible, and to secure Jawa-held locations in an operation known as “Bopom Kova Upezzo M’tuske,” which loosely translates to “Market of Free Ships.” All of these operations were an overwhelming success, with less than a dozen Jawas dying and thousands of researchers being rescued along with their cargo.

This may seem like a lot of military jargon, so here are the words of Plozz B'iciz who was at the scene as the chief cook: “So we had a good deal going; we follow these ships around and they tell us how to make better droids. Everyone's happy, everything is great, everyone eats five meals a day. But then someone started a fight! Things get bad, 20 hour a day shifts, Jawas lucky to eat two meals a day. The ship starts filling up with these weird looking scientist folk who were refugees from the battle, they aren’t like us Jawas, the kitchen has to go into overtime just to feed them all. I’m running out of dried rations, so I break into the hubba gourds, we were saving those for a special occasion. Cook up my famous hubba gourd pies and a nice stew. I put some seasoning in I got from a spacer out in the mid rim, it was real spicy so I only put in a tiny bit, had a real kick. Before you know it we’ve won the battle!”

Footage gathered during a pass at a DNA Basher Meridian-class Battle Frigate at Nimban by the Jawa Toscan Squadron “Ugama’s Coming For Ya!”

With the combat over, what remains for most Jawas is the question of what should be done with what was salvaged. Most of the ships salvaged were in need of heavy repair and renovation, and many simply had no purpose in a Jawa fleet. This has led to one of the biggest Jawa renovation operations that has ever occurred, overseen by the illustrious Ines Astyne. This involves the salvage being examined not by its flaws and damage, but by what is currently functional and how it can help a Jawa, and anything of no use being sold off. As the old Jawa saying goes, “If you don’t see the good in a product, sell it to one of the humans for 120% market value.”

One notable example was that of salvaged research vessels, which simply aren’t practical for most Jawa purposes. However, with only minor adjustments, they can be turned into excellent ships for targeted salvage operations, with the precision sensors of these craft being repurposed to locate valuable salvage buried underground rather than their traditional use involving the study of geology. Additionally, the relatively low traditional crew count of these vessels could be effectively doubled due to what is referred to as “Jawafying” the floors, which mostly consists of lowering the height of each floor and shrinking the width of hallways.

This Jawafication of ships, an idea pioneered by Ines Astyne after his graduation, has a number of benefits besides simply saving space. The more compact floors should be easier to heat, which is vital for Jawa crews due to their adjustment to hot temperatures. Furthermore, it should greatly aid the ship in resisting boarding measures, with the often human or larger boarding parties struggling to quickly move through and operate in the smaller environment. However, it would greatly limit the ability of any non-Jawa crew member onboard. As such, most of the Jawafication measures have either been performed only on ships used by entirely Jawa crews or have been limited to Jawa-only quarters. 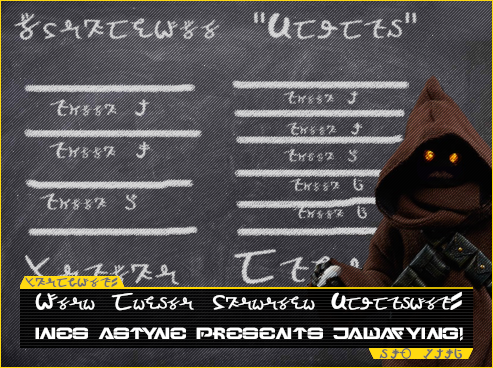 Additionally, this notably marks the first time a large number of spaceships will have been retrofitted specifically for the needs of Jawa crews. This increase in comfort and crew capacity serves as a sign of the increasing entrenchment of Jawas in the galactic scene, with Jawas no longer being considered just strange smelly hooded rats on the outskirts of society, but rather strange smelly hooded rats on the outskirts of a society increasingly built to house them. This, combined with the general feeling of victory from the battle at Nimban, has led to much celebration and partying among Jawas.

However, many Jawas have discovered that these Jawafied vessels are not optimal for celebrating this kind of success, with the limited space greatly reducing possible partying. Disenfranchised partygoer Kti Takt had the following to say: “Do you know how high the ceilings are? Five feet. Do you know how tall a nerf is when bucking? Five feet. That leaves zero feet for the rider! How are we expected to have nerf riding, a modern party necessity, in these cramped quarters? We barely had enough room for the kegs!”

Regardless, Jawas seem mostly happy with the retrofitting and increased profits from larger crews per ship, and newer designs are featuring designated rooms with tall ceilings to accommodate nerf riding and other such activities. However, many captains have yet to be convinced that keeping a nerf ready for parties is a wise idea for other reasons.

The history of the feud between DNA Bashers and ZooKeeper Alliance which led to the battle at Nimban, as told by Jawa Wildlife Hunters BiMonthly.

The history of Ines Astyne, first Jawa to graduate from a university not located in the Outer Rim, as told by Jawa Offworld Enterprises and presented by TriNebulon News

The animation was made partially possible with models from “Sci-Fi 3D”. Specifically the A-wing, B-wing, and Y-wing models by Staffan Norling, Dr. Harry Chang, and Al Meerow respectively.