Following a recent successful smuggling operation against the Rebel-aligned Triumvirate Coalition just months ago, the Car`das Smugglers have turned their attention to the other side of the Galactic Civil War, the Imperial Union. In Year 15 the former Operations Manager for Kuat Systems Engineering of the Galactic Empire’s Ministry of Industry, Vussek Kaos, liberated over a thousand vehicles from the nationalized Imperial company in a move that would embalm his legacy within Zann Consortium ranks. After the strike, the Galactic Empire issued advisories to the affected planets stating that access would not be granted to anyone without proper authorization, and that any rumored disruption of the factories was mere conjecture and wishful thinking in light of the planned expansion of current Kuat System Engineering production facilities.

Since then, the worlds have remained on apparent lockdown from the outside, until the Car`das Smugglers managed to infiltrate Kuat Systems Engineering and move nearly 50 Imperial speeders from under the “watchful eye” of Emperor Seele and the Imperial Navy. Despite it being their first mission as newly recruited smugglers, two members of Car’das were able to gather all 50 vehicles and move them aboard a string of ships that had also been trapped underneath shields. Jax Calder, leader of the Car`das Smugglers, commented on how proud he was of the new class of smugglers that have begun to surface: “As we’ve now seen over the past few months, Car`das continues to grow and evolve. These successful operations have shown that these young, new Smugglers are eager to prove themselves to the galaxy and I’m proud that Car`das can help facilitate their growth.”

News broke out earlier today that the Car`das Smugglers have also managed to smuggle more high profile assets out of Imperial Union territory. This time from the Galactic Empire world of Chamm II. 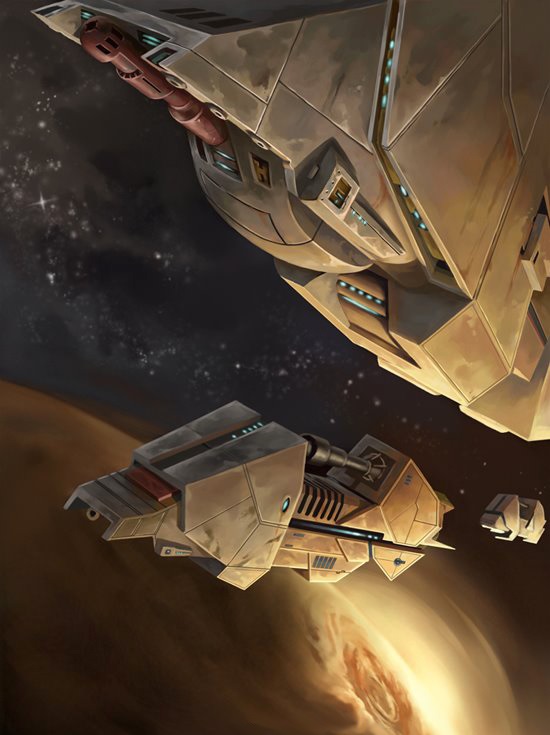 Car`das Action VI Transports slip out from under shields with bellies full of mining supplies.

The patrol-deprived gas giant of Chamm II proved to be a successful target in a series of recent hits against Imperial-aligned “factory worlds.” With three active smuggling cells in the Core alone, the group at Chamm II, spearheaded by newly appointed Car’das second-in-command Gryx Hatu, infiltrated factories under the guise of Tibanna Gas miners. The group used Action VI Transports to export the mining-related spoils from droid-operated factories in the floating cities of the gas giant. One smuggler commented “I’ve never seen such a big planet with so few people.” With only an estimated third of the planet shielded, the cell spent weeks hitting factory after factory, uncontested, as the factories continued to deposit items, droids, and vehicles, practically into the holds of Car`das ships. When asked about the state of the recent security of the Empire, Gryx Hatu commented:

“It’s like they’re just leaving the credits out for us to pick up. This isn’t the Empire I remember as a younger lad. Lazy leadership, lack of new recruits, I dunno. Don’t even get me started on their Intelligence department. I was moving weapons off an Imperial world a few weeks back, and they gave me access to a system worth of shields when all I had to do was ask! Even saw their Director, Jett Blackheart, enjoying a few drinks in the tavern near where I was making the pick up. Had a few beers with the fella and he was none the wiser. Nice guy, little on the short side"