CAMDEN, MORSHDINE -- "The ways of the Galaxy are not the same as those of the Force," pronounced the Keeper of the Whills, Gothar Elensar, of the newly formed Guardians of the Whills from their temple on planet Camden.  Rejecting the long standing belief of dichotomy in the Force, the Guardians embrace teaching that focuses on five distinct aspects, or shades, of a balanced Force. Practitioners from every walk of life, attuned to the Force or not, are welcomed to the teachings provided by the Guardians of the Whills.

Where there was once nothing but vast open desert, now stands the foundations of the new Temple of Kyber. The beginnings of what could one day be an ecumenopolis, smaller churches, chapels, training dojos, meditation gardens, and residential buildings are being constructed around the Kyber Temple. Pilgrims and those seeking enlightenment flock in countless numbers to become residents and visitors to the new holy city. 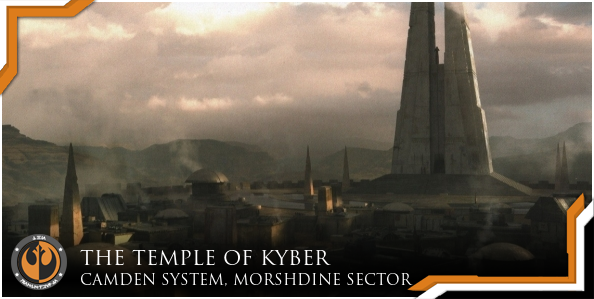 In a statement released earlier today, the new Keeper of the Whills addressed a large crowd assembled before the temple.

"Greetings my fellow sentients. My name is Gothar Elensar, and I am here to show you the paths towards balance. In a galaxy filled with extremes, it feels as though each and every one of us is forced to pick or choose a side. Right or wrong. Light or dark. One or the other. Consistently, the choices before us are presented in a way that depicts a scale, tipping one way or the other. Despite the machinations of many… this is, my friends, simply untrue."

"The true ways of the Force--the force that flows throughout the galaxy and throughout each of us--are not simply good or bad, or light or dark. The true way of the force is to maintain balance, and despite the attempts or interventions of mortal beings, the force shall always find a way to bring balance to the galaxy. When we come to understand this and seek not to change the balance, but to maintain the balance, we become one with the force."

"We understand the ever changing and recentering balance of the force by understanding the five paths of the force. Although understanding the depths and insights of the five paths may take a sentinet years to fully comprehend, they can expressed as five colored shades: the white path, the green path, the red path, the black path, and the blue path. Each of us, though we may be unaware, is a follower of one of these five paths. But again, I say, only through focused meditation and reflection, can we come to understand our true path and the role we play in the balancing of the Force, thus becoming one with the Force."

"Let it be known the Guardians of the Whills opens our temple doors to all who seek to maintain balance in the force. No matter their path, no matter their connection to the force, all are welcome here. We only ask in return tolerance and respect, for those that seek to bring balance to the force." 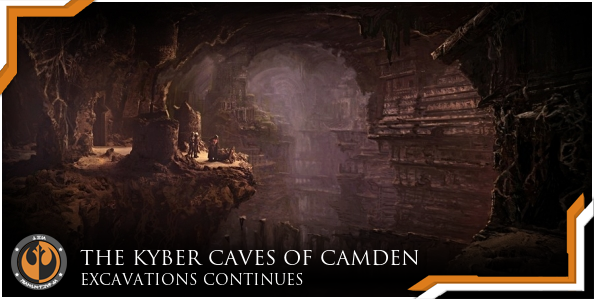 As the city around the Kyber Temple on Camden grows outward and upward, members of the Guardians of the Whills have begun exploration and excavations of recently discovered cave system under the holy city. Although few details have been released to the public through any official channels, local residents suggest they have heard Guardians talk of searching for a Force Nexus they have senesed below the city, as well as a vein of kyber crystals.