Jawas have long been drifters who were often overlooked wherever they went in the galaxy and no matter what they have been subject to laws set by others. This has led to a persecution of Jawas around the galaxy, with draconian droid rights laws and preposterous property right laws often labeling Jawas as criminals and placing a low ceiling on their success. Fleeing from this persecution increasing numbers of Jawas have been seeking new frontiers in which they can settle to live lives of liberty and profit with unbounded upwards mobility. As such, it is with immense joy and profitability that the Jawa Offworld Enterprises now announce that Sasan has come under Jawa rule, and as such the Jawas flocking to live on the planet will not be subject to any unjust regulations and taxation set by the non-Jawa authorities that have filled the galaxy.

This has also brought the involvement of Jawas in the wider Corellian conflicts into the spotlight, with Sasan being one of the planets that was lost by the “Galactic” Empire during the conflict. Due to what has been deemed an unjust and racially motivated declaration of trade sanctions against Jawa Offworld Enterprises by the Empire, the Jawa group was prompted to make use of the instability in the region in order to set up safe houses and trade routes that could be used by Jawa traders in the core. This eventually escalated into Jawa salvaging teams securing and constructing fortifications around the planet Sasan as a part of a partnership with the Flower Company, a special operations division of the Cooperative. While humans struggled to survive in the hot and dry temperatures, the Jawas thrived in it by comparison and were able to diligently work to ensure that the Empire would not be able to easily retake the planet.

Sasan proved to be a key staging point from which Jawa elite salvaging and acquisition teams could rest and refuel before performing operations in the rest of the New Plympto system and even throughout the Corellian sector. These operations were typically of a dual combat and civilian nature, with vital deliveries of food, supplies, and even refugees needing to pass through hostile controlled space. Such conditions were nothing new to most Jawas, who typically had a wealth of experience delivering that one droid to a moisture farmer in need despite countless Tusken raider ambushes. These operations brought the Jawa people and Jawa Offworld Enterprises to an unignorable position to the Cooperative government, whose High Command quickly became fully supportive of allowing the Jawa people to permanently settle on Sasan as recognition of the galactic position and valiant service of the Jawa race. Additionally, the Jawa people would not just be able to live there but also able to rule over it with the Cooperative pulling out entirely from the planet, to ensure that the Jawa people would not be oppressed by humans like they are throughout the galaxy and instead able to determine their own future. 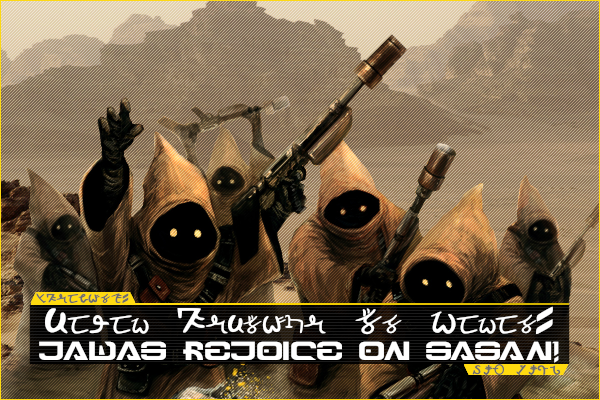 With the planet now under Jawa control, clans have begun to flock to Sasan to break ground on the construction of new Jawa fortresses. The large uninhabited sandy plains of the planet have become increasingly staked out by those seeking fortune off of Tatooine. However, the largest migration by far has been those Jawas escaping life under the Galactic Empire. Separated from their clans and put into labor camps decades ago, these Jawas have been able to reunite on Sasan and rejoin clans or form new ones in which they can prosper in the manner of community in which Jawas were seemingly preordained by the Jawa gods to live.

Additionally, Sasan has been seen as a key asset in reaching new markets with Jawa trade. The central galactic position not only provides a key place for trade to be conducted with Imperials breaking past the trade blacklist for incredibly good deals, but also for trade to occur with friendly groups throughout the core and inner rim. While in the past Jawa trading was typically confined to the southeastern outer rim, it is hoped that Sasan will enable Jawa trade to become a key aspect of life throughout the galaxy. No matter what regime someone lives under or where in the galaxy they are, a sentient should have the ability to purchase low-priced and quality droids from Jawas. As such, the world of Sasan is meant to become a safe haven in which Jawas and people from all walks of life can trade and share in mutual profit. 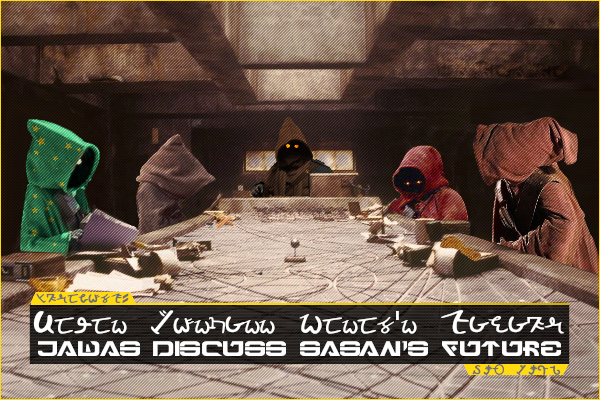 First of Many “Jawa Council” Meetings

This has also raised the question of how the government should operate. While some of the more zealous Jawas have pushed for a theocracy, Sasan appears to have been increasingly mirroring the Jawa "government" that has existed on Tatooine for millennia, with the leaders of Jawa clans coming together and reaching mutually beneficial agreements amongst themselves. This has led to a fairly devolved government, with each clan having slightly different laws under which it governs its own members. However, moves have been made to better formalize this meeting between clan leaders and to create a more cohesive planetary government better able to take on the galaxy and to ensure that no Jawas are overlooked. Jawa Offworld Enterprises has moved into the role of effectively overseeing this coordination between the clans, as well as ensuring that profitable trade conditions can exist on the planet.

However, the issue of planetwide laws has quickly cropped up due to major disagreements between rival clans as well as the clanless citizens of Sasan. This has raised the need for laws that apply uniformly across the planet, but a permanent solution has yet to be reached. One idea that has seen a fair amount of support is that of a peacekeeping force made up of one member from each clan, which would enforce the basics of Jawa contract law on the planet. However, squabbles quickly broke out regarding exactly how big a clan should be to participate in the peacekeeping force and how much control each clan should have. Additionally, one matter of contention has been whether a clan should be measured by members, wealth, or droids owned, with each option having the potential to greatly shift the balance of power between clans. Magi forces have temporarily stepped in in order to ensure basic levels of peace and normal operations between clans until an agreement can be reached, with the Jawa Industrial Magi viewed as a reasonably neutral Jawa party.

Additionally, the question of the treatment of those who aren't Jawas has been brought to the forefront. It is not clear whether there will be any difference under the law for these individuals, but what has been made clear is that they are now valued customers of the Jawa people, and as such they must be treated well. Noted non-Jawa Thomas Decoy, who runs the famous mining group, Firaxa Excavations, had the following to say about the change in government from the Galactic Empire to the Jawas: "Decoy here. When I started my company on planet Sasan, I was worried about my future. This place was known for some ‘shady’ entertainment it could provide, like rivers full of lava and spice dens full of ji rikknit drug. Since Jawas took over the planet, everything has changed. Lava rivers look nicer, and drug sellers are much more friendly. Jawas themselves visited me three times already (previous government representatives never did this even once). First time they were asking if I have any droids for sale. Second time they wanted to know if I have any security installed in my building. They asked about cameras and door codes. Third time when I opened my door, there was no one there, but I found a packet of Hot Bantha Sauce on my door mat. All of those encounters tell me one thing. Jawas do really care about my business and they want me to feel safe and welcomed on their planet. I think we will be great neighbors and I can't wait to start doing business with them!" 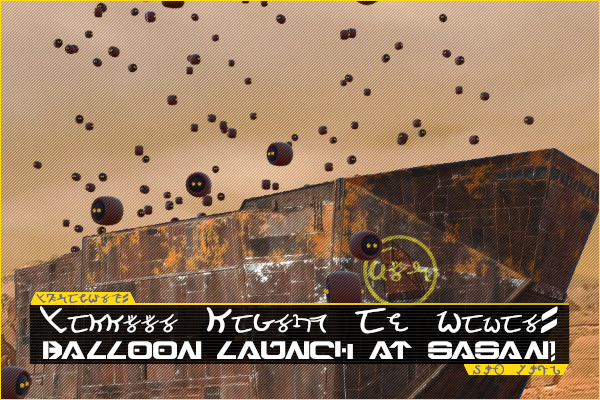 Despite the new issues posed by governance, this acquisition of Sasan comes among numerous other milestones reached by the Jawa people and Jawa Offworld Enterprises in the last year, with Jawas seeming to reach a new high every month. This seizing of Sasan is not the completion of the success of the Jawa race or even Jawa Offworld Enterprises, but rather the beginning of a new era of Jawa trade and prosperity, where Jawas are truly able to seize success on the galactic stage. This is a time for celebration for Jawas wherever they have been scattered across the galaxy. The future is beautiful, and the future has come. In the words of Ini Kedi, "Utinni!"