An HK-Series Protocol Droid appears on the screen following a brief advertisement. “We interrupt your scheduled viewing activity today to inform you of a recent power shift of the entire Shadola sector.” The viewing screen shifts to an image of a Mirialan, a microphone placed before her. 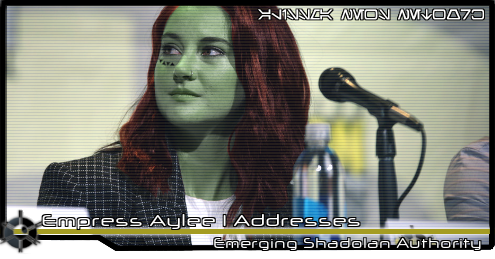 The Mirialan appears to be addressing the near twenty-six billion residents of the Shadola Sector. “Greetings to all the individuals who call Shadola their home. I was previously known as General Aylee Stewart of the Shadolan Sector Security, now I am honored to be Empress Aylee I of House Stewart. There has been a change in the Shadola Sector, once long tied to Alissma is now Governed by the Shadolan Authority. This has been a dream of mine and James Ices, one of my closest advisors and friends, going back nearly a decade and that dream has finally been realized.” Empress Aylee I points to the holo screen where the planet Gand can be seen. 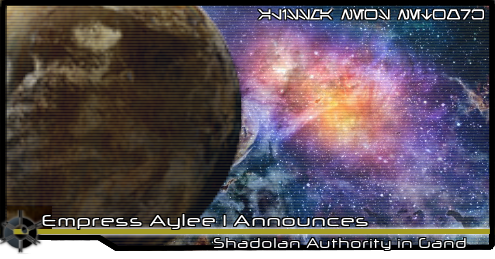 Aylee begins speaking again, “Roughly 17 planets have elected Shadola Sector Security as their new ruling power just yesterday, including the homeworld of the Gand species. It is my desire that the many residents who voted for our guidance to be protected by the Shadolan Authority from this moment on.”

The protocol droid comes into view again before issuing final statements to the press, “It has been through the collaboration and efforts of Ran Sode, Legend Myre, and Vitruvius Bakara that have made much of this possible. Each individual did their part in the campaign effort to bring about such a huge shift in ruling power in our sector. The Shadolan Authority has been appointed the lead organization with nationalized members being Shadolan Medical Corps, Maldra Mining, The Natural Mystics and Galactic Weapon Systems.” The protocol droid exits the stage before the screen shifts to another advertisement.