When you ask the common sentient about the defining features of the latest galactic year, you will receive many different answers. Some may argue that it was the battles of Krmar II that wiped out countless insurgents, or perhaps the insurrection in the Corellian sector which saw several systems liberated, or perhaps even the discovery of the Western Reaches. However, among many, there is clearly only one answer to what best defined Year 20, and that is the Jawa people. With the founding of Jawa Offworld Enterprises (JOE) happening just moments before this year began, the Jawa people were thrust into the spotlight with an increasing number of Jawas managing to bring about prosperity for themselves in the galaxy. Along with the typical year end financial reviews, this has led to many wondering how exactly JOE came to be, what it has done, and what the future holds. 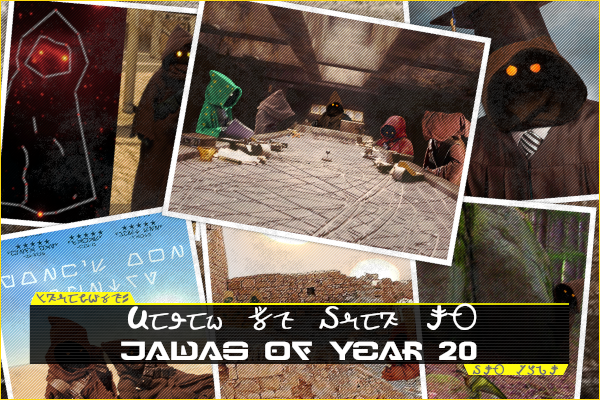 Some of the more famous appearances of Jawas during year 20.

Things have not always been good for the Jawa people. A decade ago, the Jawas were more likely to be in the news for being tossed extraordinary distances than for their own successes. Almost every Jawa in the galaxy managed to hit the low glass ceiling that human societies had in place for them. This barrier affected nearly every Jawa who tried to become successful in the galaxy. It was clearly seen in high publicity cases of Jawas who were imprisoned or murdered, but often it was far more subtle than that. Surveys of intergalactic business found that only an estimated 0-1% of all businesses had promoted a Jawa to a manager rank or higher, whereas almost every business had at least one human employed in an executive position.

It was from these struggles that JOE was founded on that historic day just over one year ago. The Jawas Ini Kedi, Kolomon Seph, and Jic Uiji admittedly had next to no plan when they signed the founding documents. However, what they did know was that there was surely a better life that Jawas could have in the galaxy than what they had been experiencing up until then. There was no good reason for the Jawa people to be stuck on Tatooine trying to sell the same droids to the same moisture farmers who misplaced them time and time again. There was a whole galaxy out there with an effectively infinite number of potential customers! It wasn't about changing Jawa ways, but about breaking the invisible height limits of society, and giving Jawas the ability enter previously untapped markets. 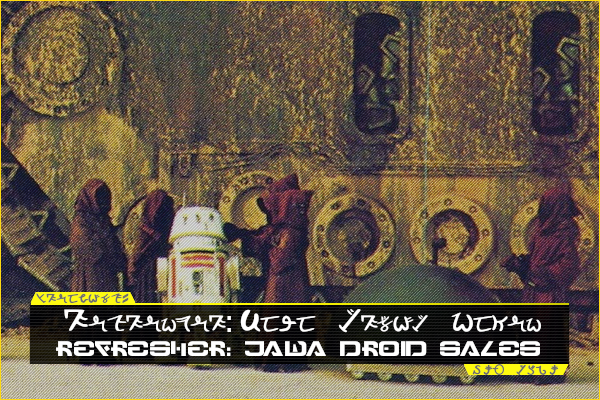 Most Jawas do not start off running intergalactic businesses, but rather began their careers selling droids.

Since those founding days, things have certainly changed for Jawa Offworld Enterprises, from the early days where the group traveled from planet to planet looking for legal salvage to later indirectly employing almost half of the Jawa diaspora from Tatooine. However, not everything went smoothly. The traditional structure of Jawa society is one that tends to avoid large monolithic organizations, which was not ideal when trying to start an intergalactic business. As the old Jawa saying goes, "He who trust those bigger than himself is sure to find poverty." However, by restructuring into what is essentially a Jawa business accelerator and investor in many smaller businesses rather than outright controlling them, JOE has managed to continue to grow despite this natural Jawa aversion to its fundamental structure.

JOE as a whole has seen major success due to this growth. From their roots in being salvagers for hire, the Jawas first rose to galactic prominence during the “Science Feud,” specifically during the battle for Nimban. Here the salvaging crews managed to succeed at the monumental task of salvaging swathes of technology and research from the battlefield all while combat raged on and years of research were on the verge of being lost forever. This ultimately culminated in the salvage of the Meridian-class Frigate, the “Mary Dean,” named as such after an error in communication made by the late Jawa St’eve who died trying to salvage a nearby Y-tie to pay for his children’s education. After this, the Jawas and their new found flagship found themselves involved in the rebellion in the Corellian system and eventually settling Jawas on the sands of Sasan. Here JOE could no longer focus on simply salvaging and reselling technology, but rather had to adapt whatever they could to make the otherwise inhospitable planet a place where Jawas could thrive. It is still up in the air exactly what role Sasan will play, but the focus appears to be in establishing a trade post to access profitable markets in the core and inner rim.

However, the story that best captured the Jawa dream has always been that of Ines Astyne. The lowly Jawa from Bestine who went on to graduate from Corellia University and now oversees the research and development arm of JOE was first in the public eye almost a year ago when his graduation hit the galactic news, and he has enjoyed a level of fame around the galaxy since that story first broadcast. We asked Ines to comment on his own success, and he had the following to say: "Everyone thought I would never measure up, never make it to university, and certainly never design spacecraft. They told me it would just be easier if I stayed on Tatooine and got into the family business of droid S & S, salvage and sale. But this just wasn't going to work. After all, why do Jawas try to sell droids to the most difficult of hagglers or leave oiling our droids to the last moment? We do it because challenge should not be run from, but rather, it should be embraced. I'm not going to say you won't face problems. When I first entered a spaceship, I couldn't reach the controls without stilts, and then when I reached Corellian University, they tried to make me eat lunch with 'the rest of the rodents in the back alley!' But if I had never faced and overcome these challenges, I wouldn't be half the Jawa I am today. JOE won't remove the challenges you face, but we'll be here beside you to fight them with you and share in your success." 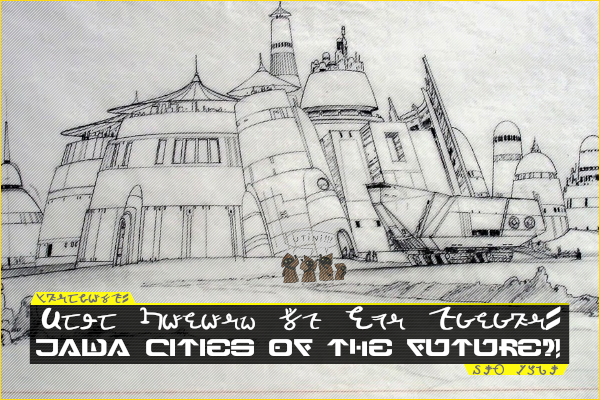 A sketch of a possible Jawa fortress design by JOE Jawagineers.

So what comes next for the Jawa people? At the moment, that is highly unclear. Some vocal Jawa nationalists have argued that Jawa Offworld Enterprises should reform into a largely governmental institution focused on Sasan, moving away from its roots as a business conglomerate and shifting towards forming a sprawling Jawa kingdom where concepts such as salvage rights can be codified and better protected. Others argue that it is the place of the Jawas to simply grow the business opportunities, and to establish more trading outposts throughout the galaxy so that there is no planet with a market Jawas can't enter. However, no matter what happens it will be done by the Jawas for the Jawas. The times of economic, physical, and legal slavery of the Jawa people is ending, and when it is over, there will be nothing that Jawas cannot reach.

Myself, Jic Uiji, JOE, and all of our members would like to take this moment to thank everyone who has supported us whether it be with words, opportunities, or financial assistance. Nearly three years ago, someone gave me a token sum of credits and told me it was to help me fund a Jawa-only business that would one day span the stars. At the time I thought that it would be impossible, and that if an intergalactic Jawa-only business ever formed, it would never be as strong as Jawa Offworld Enterprises has become. To those who have helped Jawas and helped JOE, I sincerely thank you. None of this would have been possible without your assistance. While I would love to say that it was only because of my work that I stand here in orbit of Sasan having brought newfound prosperity and success to the Jawa people, the truth is that JOE’s success cannot be attributed to one single Jawa. Instead, we have only gotten here due to the excellent and tireless performance of our members, the many Jawas who have gone before us who passed on before they could see JOE’s success, and those who have helped us around the galaxy regardless of their species or political affiliation, many of whom who had to actively go against their political affiliation to help us. We sincerely thank you all and want to make sure you know that. You always have a place on Sasan to rest and purchase the finest quality droids.