While much of the galaxy has come to a standstill in light of the sudden Imperial expansion, the same cannot be said for the Jawas of Tatooine. With the sudden rise of the Empire on Tatooine and in many of the sectors surrounding the Jawa homeworld, the Jawas have been left in a precarious position. While many sentients who used to be Republic citizens debate over silly subjects such as the suspension of rights they used to take for granted, the Jawas of Tatooine face a fate far worse. The suspension of Jawa profits has begun, with the prices of many imports to the desert world of Tatooine skyrocketing due to the political instability and the trade of many substances being cracked down on by Imperial patrols. 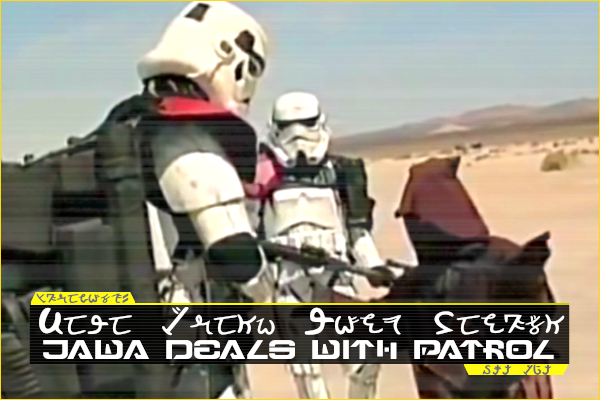 Jawa trader trying to explain the intricacies of adverse possession law and its importance to an Imperial patrol.

In light of this crisis, Jawa Offworld Enterprises has turned its focus back to its homeland with the corporation sending a large number of vital supplies, such as water and demolition tools, to the planet along a number of traditional Jawa smuggling routes. As the political turmoil has continued and trade has continued to dry up, this eventually escalated to sending convoys complete with Jawa Offworld Enterprises’ finest negotiators and war profiteering experts. With increasing numbers of smugglers being forced to dump their cargo due to the presence of Imperial patrols, this is clearly not a long term solution, but successful shipments are enabling trade to continue among both Jawas and other species alike on Tatooine.

However, despite the assistance provided, many humans have speculated that these Jawas are merely motivated by profit. Despite the vicious accusations, JOE has vehemently denied using the Galactic Civil War and the suffering of billions purely as a tool to aid in their profit. In fact, the high prices the Jawas have been charging are vital to ensure the fair distribution of goods. As outlined in the basic principles of Jawanomics, if a good is given away for free then it goes to those who buy fast and not those who are needy. This is clearly not greed, but rather doing what is best for the people.

Additionally, JOE has been working towards establishing long term solutions to the current crisis on Tatooine. Many prominent members of JOE have recently been spotted on Tatooine coordinating with local Jawa community leaders to work on solutions to the current situation. This has been greatly aided with a large presence from the Jawa Industrial Magi, with these notable religious Jawas and shamans making use of their position in Jawa culture to meet with Jawas that trade representatives simply wouldn't be able to get to. 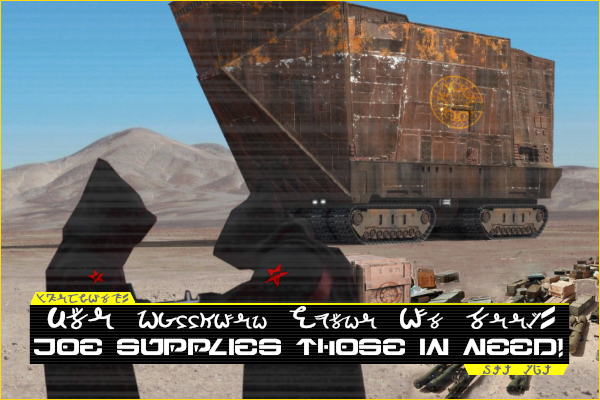 Chek Gevir, a Jawa who recently rose to prominence in the underground organization known as the Jawa Liberation Front, was asked for public comment and had the following to say: "We've seen this happen time and time again with human ruler after ruler. They keep us down, they put us in prison for possessing droids we couldn't possibly have known belonged to that moisture farmer while not even providing basic defense. So I ask, why is it up to them to decide what I can do with my droids, what weapons I can own, or who I want to sell them to? They give us Jawas nothing we wouldn't have without them! If you think trading an R4 for a GNK is a bad deal, that is nothing compared to this!" While the JLF has more extreme views than most Jawas, the use of droid trading analogies has struck a chord with many.

Regardless of precise reasons why, there is clearly a feeling of discontent in the air for many. Protests have been seen at many of Tatooine’s major population centers, mostly coordinated and attended by Tatooine’s humanoid population. However, some Jawas have been seen intermixed in the protests albeit typically for reasons of sales rather than picketing. So far these have been relatively peaceful, but there were several protestors reported as having been shot after a crowd went too close to the governor's house on Tatooine. JOE advises Jawas to minimize their time in such crowds to only what is profitable. 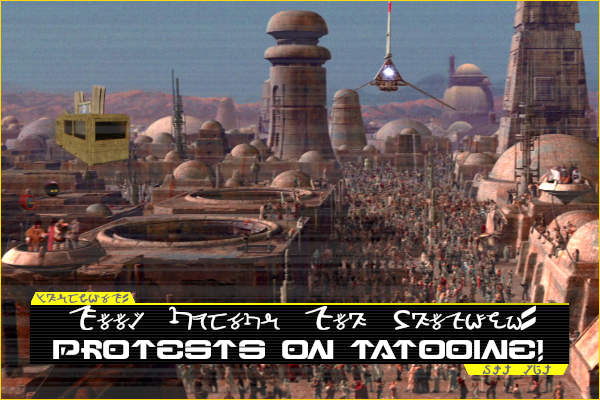 If you go to a protest be sure to be selling something profitable.

The Jawa Industrial Magi and Jawa Offworld Enterprises want to take this final moment to remind the galaxy, Jawas in need of supplies to sell or non-Jawas looking to purchase supplies at reasonable prices should contact their local JOE representatives.