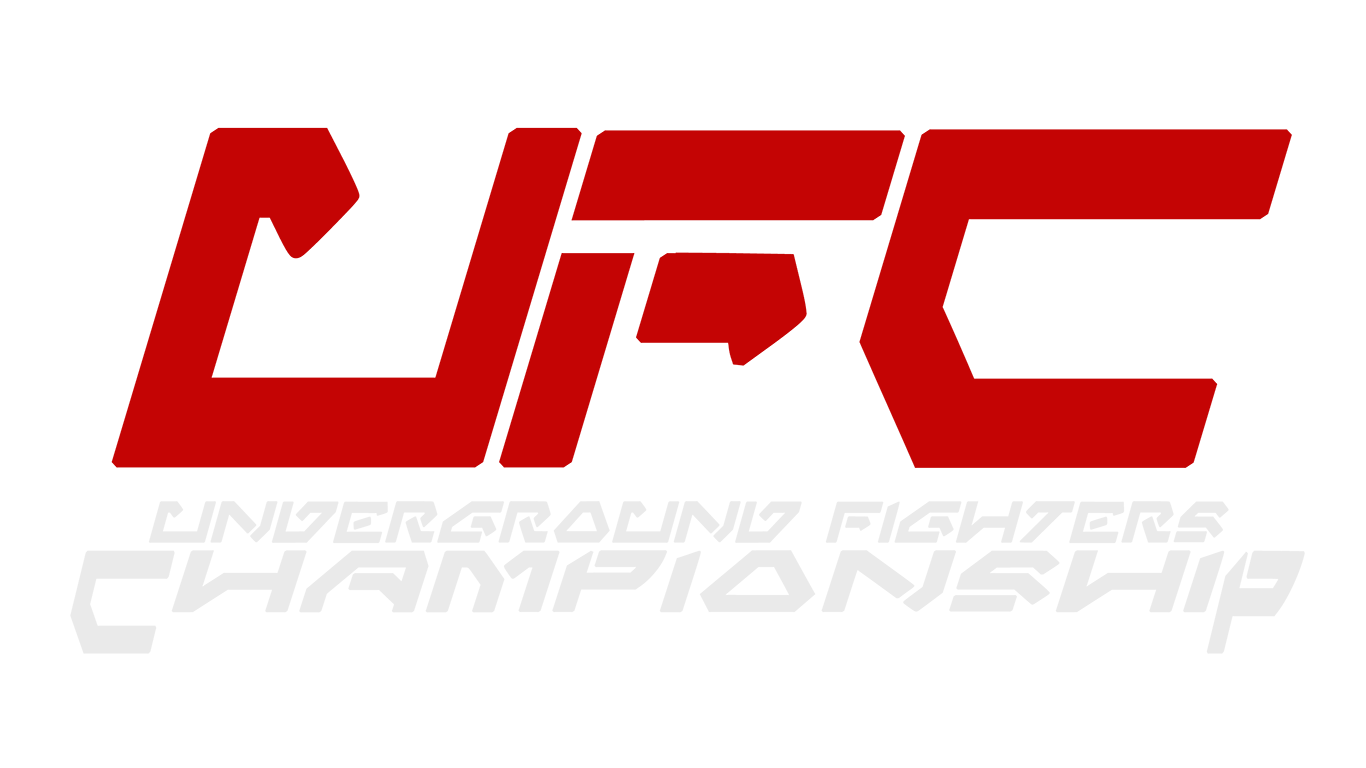 The Underground Fighters Championship makes its debut on Day 234 with UFC #1, which takes place in purpose-built cages on Serroco with a Main Card that that will be aired live following two undercard bouts, featuring Dac Kain as the UFC's special referee. These fights will all be viewable in the Bad Alibi Bar, owned by The Skulls Swoop Gang. 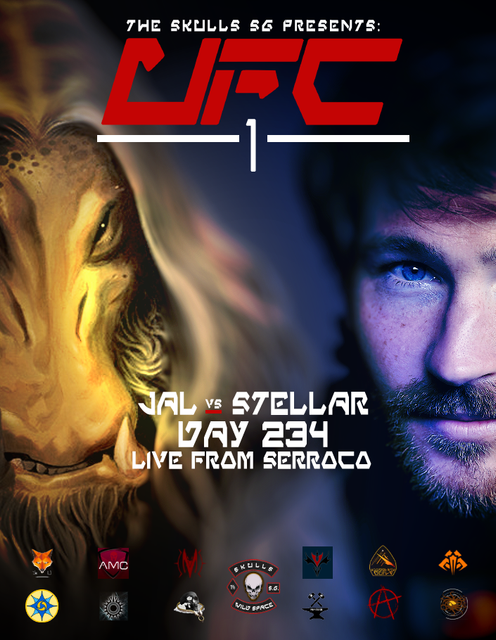 Jal, a Road Captain of the Skulls, is no newcomer to violence. Fierce by nature and brutal by trade, Jal's debut entry into the UFC will be one for the ages. His training camp has been ferocious in order to get him into the best shape possible to dominate the cage. When we asked Jal what his camp has looked like, he said,

"Space is the place and the sky is the limit yeaah! I've been bench pressing my swoop bike and knockin down a gallon of whiskey a day! Yeaah feelin spunky and ready to get funky!"

When asked if Jal has any words for Stellar before the fight, he had this to say,

"Gonna happen SO fast you can't even talk about it! LUCKY person yeaah, out there somewhere, gonna win a silver cloud. What a lucky lucky lucky person yeaah...And I'm talking about you, ETHAN STELLAR! I'm talking about you and the Guyana, locked in a cage, no where to run yeaah... And you know what Stellar, yeaah, if you were to fight the Macho Whiphid, if you were to fight me, and lose the bout and still walk out with your life, yeaah... You will be a lucky lucky lucky man, yeaah. BECAUSE I AM THE UFC ETHAN! I AM THE UFC! I'm the cream of the crop, that rises to the top......of the cream.........of the crop! And comparatively speaking you are nothing but garbage compared to the Macho Whiphid. And I'm gonna leave you in the garbage when I'm done yeaah. Its gonna be Whiphid madness baby! Whooo! Freak out!"

Stellar is no novice to cage fighting, having multiple bouts under his belt in the cages of Scum's Hideaway. A worthy opponent, without question, but will Stellar's experience outmatch Jal's intense training? Or will Stellar fall flat when it comes time to rumble? We asked Stellar to describe his training camp for us. He said,

"I know that Jal has me bested in raw strength, so I've really been giving my all in training for this fight. A standard day for me starts with a 10k run, then I spend a ton of time practicing my footwork. After that, to try and pack some more power into my punch, I've been spending a couple of hours on the heavy bag. The real secret in my fighting style, however, is my hand speed... and my method to build that speed is simply the best. To improve my hand speed, I vigorously train the 12 ounce curl. Not a moment goes by that I don't have a drink in my hand. Once those knucklers go on, my hands will be light as a feather. I'll pummel Jal with such a fury, that he won't even know what happened. As an added bonus, the alcohol helps to open up the blood vessels so that I have better circulation... which means better recovery!"

When asked what words he had for Jal, Stellar had this to say,

"When I'm done with you I'm gonna turn you into a nice rug for my Starship. She needs some new décor! And that Guynaa in the cage. When im done with you he is gonna be my pet and he is gonna use your fur coat as a fancy bed! Its time to whip the whiphid BOyeee!, You may be the cream of the crop. But im the crow of the sky! Im gonna eat you up until there is nothing left but dirt in your field!"

Jal's raw, brutal strength and Stellar's impressive experience in a cage is shaping up to be a highly entertaining matchup, and the perfect choice for the debut Main Event of the UFC. 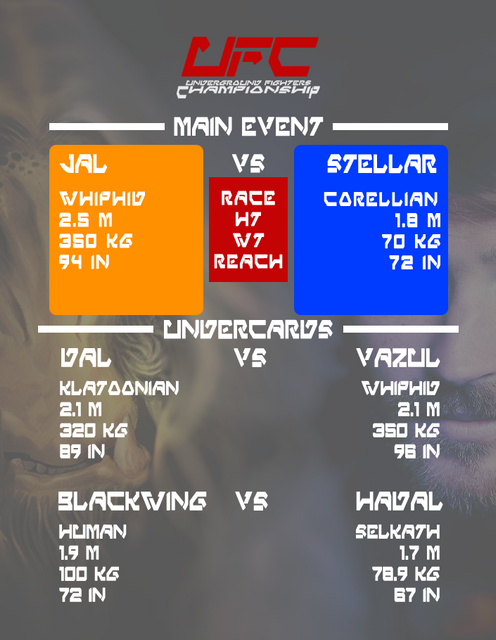 UFC #1 will open with a bout between Blackwing and Hadal. Blackwing has Hadal bested in raw strength, but Hadal has much more experience than Blackwing.

The second bout of UFC #1. Despite being signed as an undercard, this matchup shows the potential to be the fight of the night.

Dal and Vazul are equally experienced and seem to have very similar levels of conditioning. This matchup is very even, and is looking to be a good, long fight. The victor is certain to have a very successful future in the UFC!

Fenri Bjornolf, President of The Skulls, was asked about what drove him to create the UFC,

“You know, being the owner of a bar that is very popular with members of the underworld, we see a lot fights. It didn’t take long until we started to wonder who the baddest sentient in the galaxy was... It was that question that brought us to where we are today. It was a hard road to get here, though. There were several times over the course of these last few months when I thought we’d never be able to make this happen. I’d like to send out a very special thank you to our sponsors that helped make this happen. We are all excited to see just how far we can push the UFC!”

When asked what the outlook for future events looked like, Fenri also said,

“We are wanting to host a Main Event monthly! Things do look good moving forward... We have some big names signed for UFC #2 already, and even bigger names for UFC #3!  We are looking for more fighters to fill those undercards though. Anyone interested should contact me!”

UFC #1 will be live in 5 days, and it is looking to be one hell of a show. Who will win between Jal and Stellar? The Galaxy soon will find out.

Interested in betting on the fights? Come to the Bad Alibi Bar and talk to Hondo Walker for the odds.

Stay tuned to keep up to date with all of your UFC news.

(The broadcast ends, and returns to Local Programming)