As the screen turns on, you see a man standing in dark orange armor with an emblem of Mandalore on his breast. He is taking off his helmet to reveal a Gotal face with a well-combed beard. The helmet is slowly placed upon a desk, and he then leans forward with both hands on the table. After a few seconds, he carefully begins to speak in a thick Mandalorian accent: 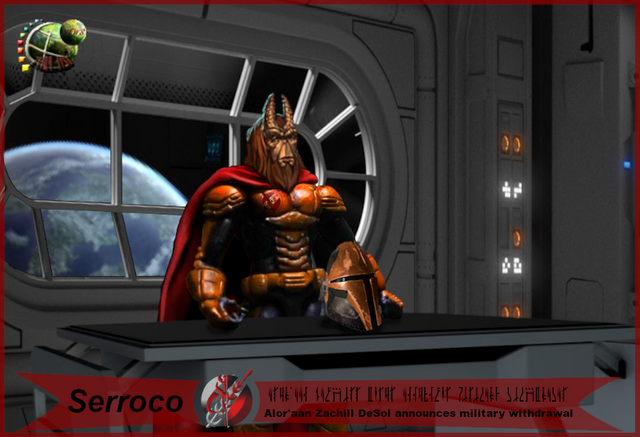 Not of my position in the Mandalore military.
Not in my officers at my side.
Not of loss and fatigue.
But yes, of battle.
Of the battle which didn't happen, which I came to fight in.

A vod called for assistance and we sent a fleet to help a brother in need.
"All of Zann" - they said - is what we will meet.
All the mighty warriors, who just so proudly boasted in their victory over the Rebel forces.
And I was ready to fight to the last.
A whole fleet of Mandalore was sent,
with the finest soldiers, to protect a friend.
But what we found, in the end, was nothing but sand.

Where are the shadow warriors who never rest? Are they exhausted?
Where is the dark sun that promised to drive fear into our eyes? Are they afraid?
Where is the Zann that everyone is talking about?
Is it just a rumor to scare little children back home at night?
They might indeed make a good story or two.

But not to frighten the children of Mand'alor.
Because we have stories of warriors who come.
We have legends of soldiers who won.
We keep fighting until it is done.
We will come to protect every son!

When I now holster my blaster, which I didn't need.
When I pick up my sword, still rests in its sheath.
And when all the soldiers now leaving the street.
It was still not in vain, because it's a brother we meet.

But today is no battle needed.
We go home, but being ready anytime."

With these words, the Gotal picks up his helmet and walks off the screen. With a small "click" the lights darken and a door closes.
Then the screen fades to black.