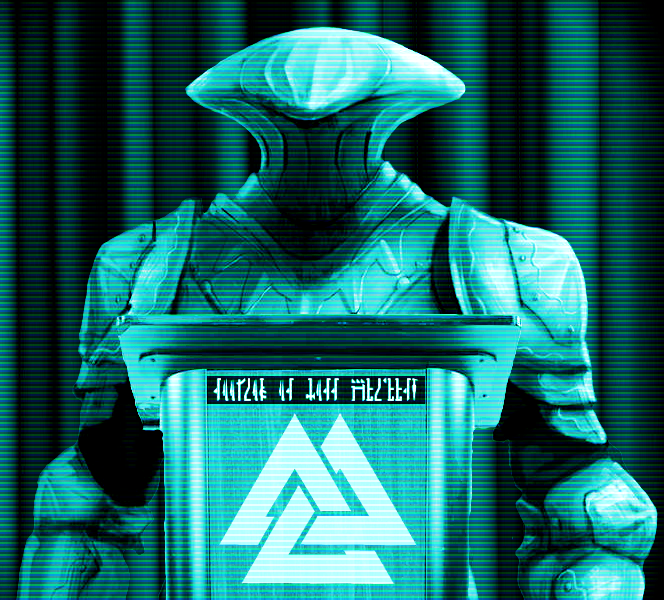 "Creatures of the press.

"A swoop gang calling themselves the Dark Star Hellions has announced that they are conducting a protection scheme in the conflict-ridden Derra system. This is a classic caper, in which the gangsters pretend to be assisting the public but anyone who does not comply with their demands is brutally victimized by them. It's an old and frankly wearisome trick, lacking in both creativity and dignity.

"If you are traveling in the Derra system and are hailed by a pirate vessel, do not respond in any way. They are trying to establish a transponder ping. The Argent Company mercenary dragoons, Guildmasters of Mandalore, have formally protested this act by the Dark Star Hellions and any bounty hunters pursuing fugitives in the Derra system are encouraged not to acknowledge the gang's right to demand your identity. Bounty hunters are entitled to privacy when practicing their trade and it is a violation of the Creed to interfere with the pursuit of a contract. As the Dark Star Hellions refuse to peacefully resolve this dispute, I must declare them a disgrace to the Guild and recommend that all self-respecting hunters abandon the Hellions tavern network. Do not conduct any form of commerce with the swoop gang, or any agency that harbors or supports them.

"The failure to peacefully negotiate with these outlaws is my own. But I would like to assure the public that violence is also being exercised in an attempt to convince these marauders not to commit themselves to such an obvious mistake. To date, the swoop gang is reluctant to engage and their hesitation has only resulted in a minor loss of equipment which they left scattered around Derra I and IV without being properly defended. Their sensor networks are being specifically targeted in order to protect visitors from being observed and tracked. Any gangsters caught in the open on any Derra planet, and that includes the swoop gang and every one of its misguided allies, will be subject to immediate assault. These conditions will prevail until a settlement is reached and the protection scheme is permanently lifted. If you are not one of these ridiculous swindlers, you are of course at liberty to conduct whatever business you might have in Derra. Ibic cuy yust. I estimate the odds of a gangster successfully detecting, tracking, and ambushing an unannounced visit are approximately 1,138 to 1.

"Any galactic agencies that are in a state of formal hostility with these gangs may contact me discreetly, and I will take the time to share the military intelligence I have gathered in and around the Derra system, provided that delivering the data to you represents an act of hostility against them. To the members of the swoop gang themselves, I say this: I know that you have a bad feeling about this gambit. Trust your feelings, but hide them deeply. Your masters are proud and will harm you if they suspect that you question their folly. The best day to reclaim your honor is today.

"Thank you for your time."