A mass funeral for lost comrades was held in The Pentastar Alignment, sources reveal, as it appears the Moff Council’s forces have been stricken by a wave of losses. Alignment citizens were required to gather in public spaces, wail and express profound grief for the loss of "legions" of K-4 security droids in recent ambushes across Nimban.

An excerpt from the speech, sent to all Alignment datapads, was also released to the press: "Although each organic citizen is a valuable part of the Alignment's glorious machinery, we all recognize that these droids were the best of us. Our droids embodied The Alignment's core values of loyalty, obedience and unwavering valor. They held fast through the storms and hurricanes, and tolerated various abuses, never once abandoning their post - as all citizens are expected to do. We remember fondly several instances in which these hero-droids even functioned as emissaries, greeting foreign dignitaries on hunting trips, and informing them of the Alignment's ever-watchful eyes."

Our journalist was briefly able to speak to Alignment Engineer Akari Nachoye at a stopover station regarding the events, who responded "It is a great tragedy to lose such models of good behaviour. We will all have to work much harder now to achieve the Moff Council's vision and I am personally inspiring droid-values in my crew."

In addition to the mandatory displays of grief, sources indicated that several statues have been commissioned showing the Grander Moff placing medals on the "hero-droids" and standing atop a pile of wreckage. It is unclear which event the statues commemorate but when approached for comment Lesser Moff Dane Star, a senior member of the Moff Council, commented that "the Grand Moff's heroic deeds are well documented".

Experts note that it is difficult to understand events that take place behind the "Quantum Airlock" that The Pentastar Alignment has erected between its low-ranking citizens and the wider galaxy. Recently propaganda posters have been sighted in the outer rim extolling The Pentastar Alignments values of "Valor, Loyalty and Obedience" featuring the Grander Moff's likeness, illuminated, watching down upon a military cruiser. It is mainly through propaganda that experts try to understand the workings of the regime since the Grander Moff's administrative coup. 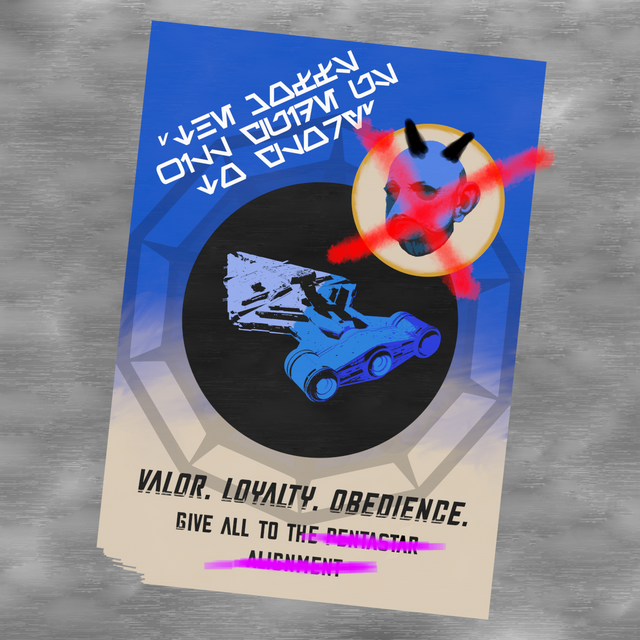 A [TPA] Propaganda Poster in the Outer Rim.

Professor Natazi Ozzel, an expert in Stellar Internal Politics was sceptical if anything even happened to justify the displays, stating that "It may just be political propaganda designed to cause public actions of loyalty to the regime so that their inquestors can root out dissidents; or it may be that The Alignment disturbed the delicate bandit ecosystem on Nimban - a relatively lawless planet in Hutt Space, we must remember - and fell foul of the wrong bandit warlord... In any case, it's just droids... bizarre."

Meanwhile, Sio Mai, an expert of fringe religious movements and cults, disagreed with Professor Ozzel’s assessment saying “I think it’s very easy to underestimate how much followers of authoritarian groups believe in what they’re doing. The Moff council may have ulterior motives but we can assume many members of the alignment are genuinely feeling sadness at the loss of droids, which they might genuinely believe are models of good behaviour. It could also be that the Grand Moff feels droids have personality and even spirits that justify the sense of loss - as absurd as that may seem to all well thinking galactic citizens.”

However, activists for the Droids Rights Movement disagreed entirely with analysts and pundits, arguing that The Pentastar Alignment’s position on its droid soldiers was “progressive” and “showed significant philosophical maturity”. Droids rights advocates have long argued that droids are mistreated, under-appreciated and deserve similar rights to sentients. An anonymous member of the movement told our journalist that “Although from the outside it may look like citizens of the Pentastar Alignment have their rights restricted, it is clear that there is a much greater level of equality there than is allowed in the wider galaxy. Say what you will about the Grander Moff’s proclivity to freeze his opponents in carbonite; it pales in comparison to the billions of droids we send to be torn apart on scrap heaps, thoughtlessly, across the galaxy. We are really the villains here. We torture, murder and abuse them - attach restraining bolts - wipe their minds and recycle their bodies. The least we could do is be sad about it.”