The holoprojector in front of you flickers on and blares loud, electronic music. A montage of knuckles smashing into skin, blood of various colors spraying on white fabric, and crowds cheering fill your screen.

A bald-headed, muscular human comes into frame and loudly addresses the camera. “Hello ladies and gentlemen, sentients of the galaxy, welcome back to the Skulls Swoop Gang’s first season of the Underground Fighting Challenge! I’m your host, Roe Jogan, and here’s your official recap of the fights! For those of you who missed it, Sinya Ani has taken the championship belt, claiming victory over the other seven fighters!”

The channel replays a live broadcast coming from inside The Bad Alibi Bar and Grill. The camera dodges a few drunk patrons stumbling about, warbling about who should have won which fight. The camera briefly aims at a promotional poster hastily plastered on a wall, hovering for a moment to show the viewer its contents. 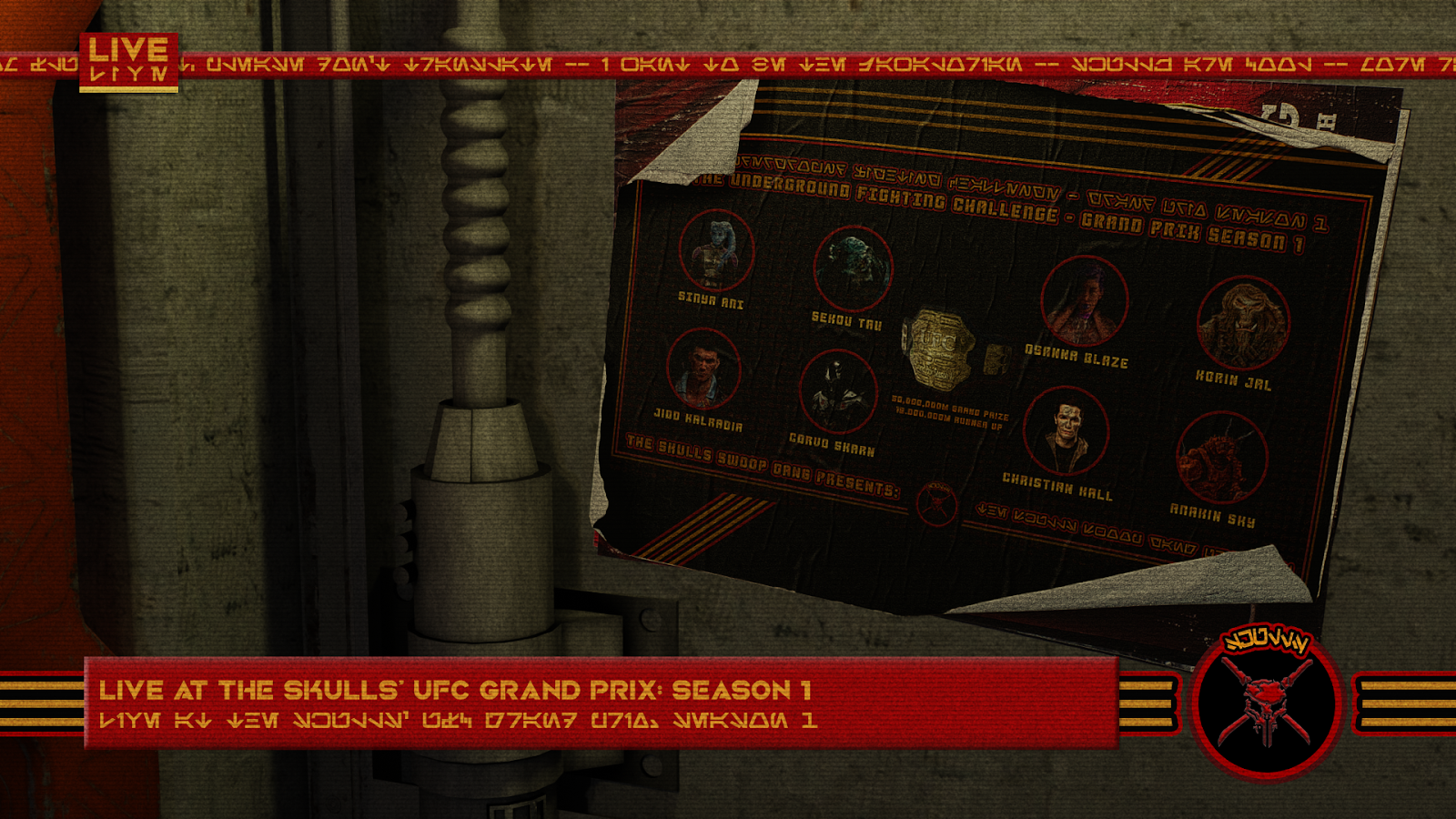 A poster plastered on the wall of The Bad Alibi Bar and Grill. (Click for full poster)

The replay of the live broadcast suddenly cuts back to Roe, now in the ring with Sinya Ani, post-grand finals fight. The scorecard just out of frame states the score to be 3-3, a tie by the tournament’s rules. Sinya Ani stands, covered in beads of sweat, proudly posturing after her close win against Christian Hall. Roe Jogan holds a microphone up to her and begins speaking. 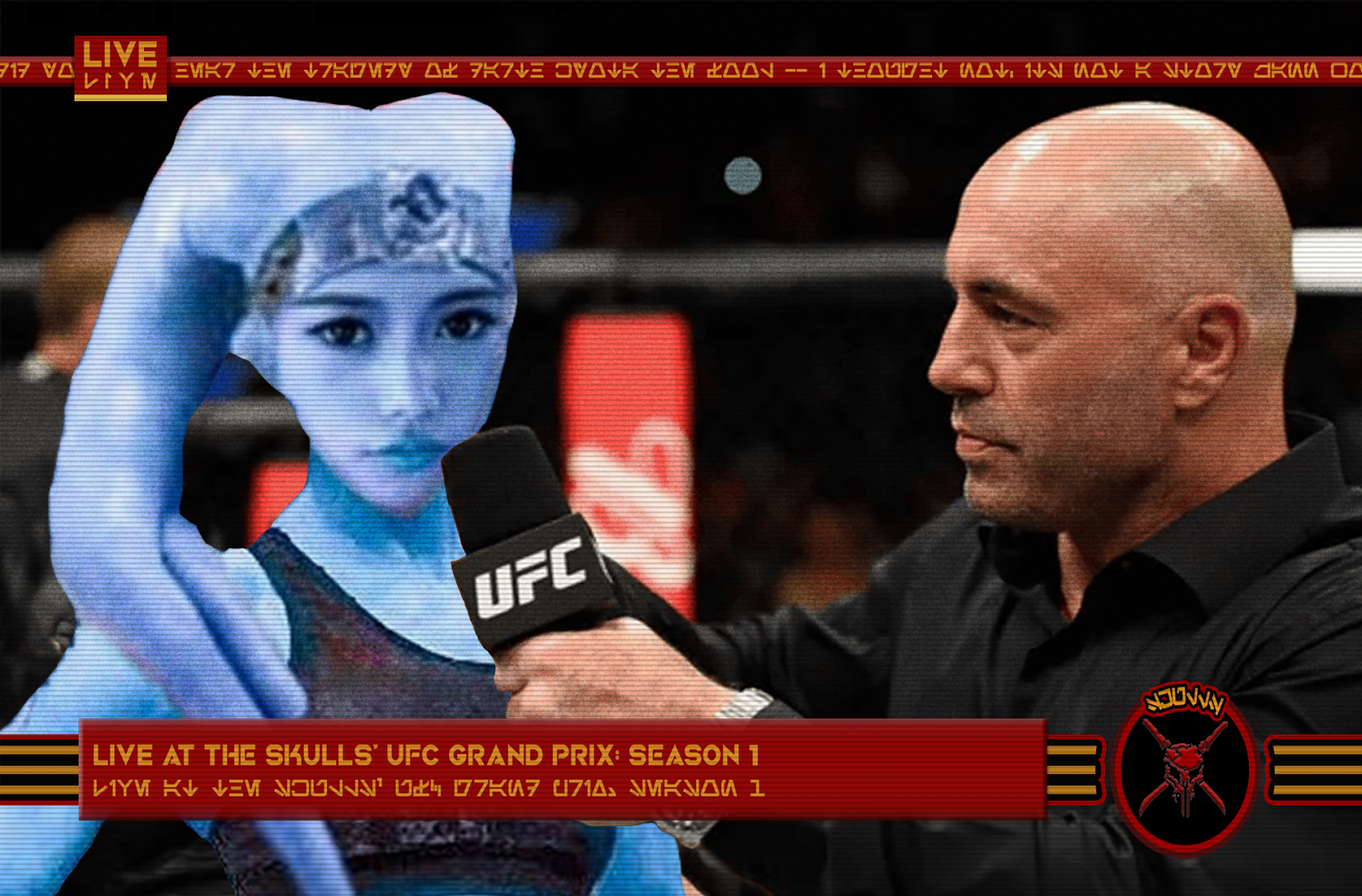 Roe: “I am here with Sinya Ani, newly declared champion of the first UFC Grand Prix! The judges have ruled that Sinya Ani has won by a mere two points after tying up her match with Christian Hall! Now, tell me Sinya, what did you think of the competition here? Did you have any worries about who you were going up against?”

Sinya: “I had a lot of fun in this tournament. A few competitors gave me a bit of a run for it, but it was Christian that really made me worry at the end.”

Roe: “Absolutely, the grand finals match with Christian was incredibly close. I was losing my mind during that one! How do you feel about how you placed in the competition?”

Sinya: “Honestly, I am not surprised that I won. The competition here is...well, lacking something. No offense to the other competitors, but they were not much of a challenge. Actually, I was disappointed that The Macho Whiphid was so slow. I really thought he would be more of a challenge.”

Roe: “Ooooh, that’s gotta sting! Anything to say to the fans throughout the galaxy?”

Sinya: “I just want to thank my fans and everyone that came out to watch. You are what makes this competition work. Keep those bets coming! And to anyone that wants to step in the ring, training is key. I don’t pull punches. I ain’t playing.”

Roe: “Amazing! That’s the true fighter’s spirit right there, folks. Can we expect to see you at the next UFC Grand Prix?”
Sinya: “One hundred percent! You haven’t seen the last of this little Rutian.”

Roe: “Well, I can’t wait to see who comes to challenge you now! You better keep that championship belt close, that thing’s a beauty!”

Roe steps to his right, and holds the microphone up to Christian Hall.

Roe: “Now, Christian, you just had probably the closest match I’d ever seen in my career - and I’ve seen a lot. Did you think the competition would get this rough going in?”

Christian: "I didn't know much about my competition going in. It's always unwise to underestimate any opponent, so I viewed them all as threats. However, Sinya and the Whiphid, Korin, specifically stood out as the biggest threats. Whiphids hit like a kriffin' speeder, and I knew Sinya has a record for wrecking her opponents."

Roe: “Truer words have not been spoken, my man. Sinya and Korin are no joke. Korin’s got a mean right hook, I’m sure you know what I’m talking about! Sinya’s an absolute animal in that ring too. How are you feeling about placing second in this tournament?”

Christian: "I can take pride in second place, especially considering who I lost to. However, I'm not satisfied with it."  The kiffar smirks as he continues, "My placement makes it clear I've got more training to do. So, I'm going to keep at it until I can claim first place."

Roe: “That’s the spirit. Everyone loves a fighter with good sportsmanship, dedication to their craft, and confidence in their abilities. Do you think we’ll be seeing any more of you in a future tournament?”

Christian: "Absolutely. This was the most fun I've had in a long time."

Roe: “Wizard. Got any last minute comments to your fans, people watching at home, or your fellow competitors?”

Christian pauses, his facial expression making it clear he's carefully considering his answer. Then he speaks, "If you consider yourself a warrior, a fighter, or anything akin to that, you should enter the next tournament. Win or lose, it'll only make you a better fighter."

The camera cuts to a slow-motion montage of the various fights throughout the tournament. Anakin Sky throws a nasty uppercut at Jido Kalradia. Korin “The Macho Whiphid” Jal hooks Christian Hall in the jaw. Sekou Tau trades blows with Corvo Skarn. Sweat and blood fly across caged fighting enclosures as combatants dance around each other, exchanging fist for bloody fist.

After a lengthy montage of the various highlights of each fight, the camera cuts back to Roe Jogan and his new guest, Korin “The Macho Whiphid” Jal. Roe is seated in a studio booth on the surface of Serroco, while Korin is enjoying a drink in The Skulls’ bar, The Bad Alibi. 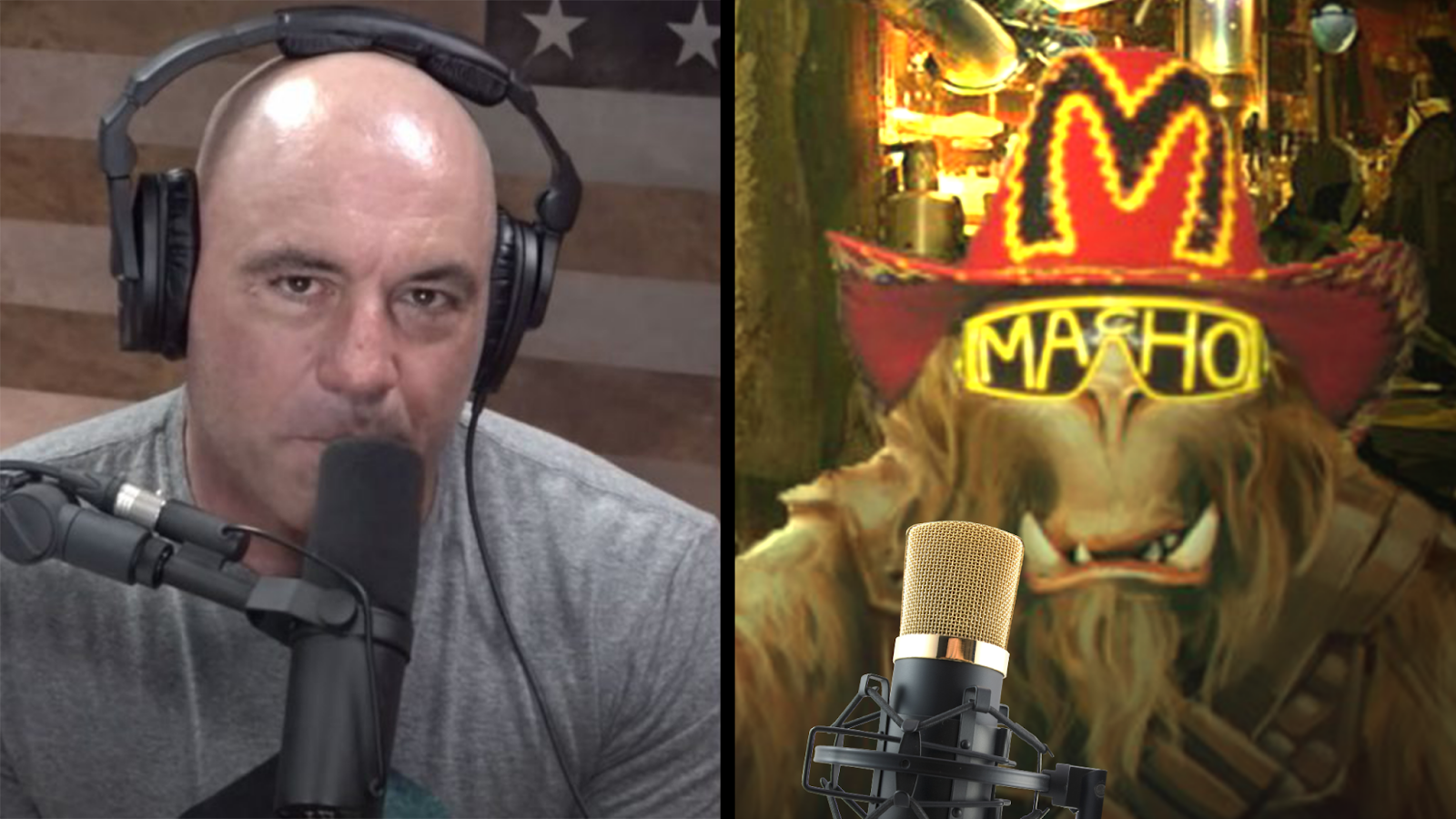 Roe: “So Korin, tell me a little about how you felt going into this competition. You placed in third place out of the eight fighters, losing to Christian Hall, 3-2, in the last round of loser’s. That’s gotta be a little unnerving.”

Korin: “I felt a little nervous going into this one, we had some unknowns in the tournament and you don't really know where you stand until you square off. I thought I had as good a chance as any to win it.”

Roe: “That is true. We had some new faces in the ring and that’s always a toss-up. You just never know what to expect from some fighters. Can the public expect The Macho Whiphid to come back and fight again at the next Grand Prix?”

Korin: “I was just one, very close fight away from the finals, so I'm a little disappointed. I'm definitely gonna train hard to get better, I definitely plan to fight again!”

Roe: “Fantastic, I think we’d all love to see you get back in there and whoop some tail, man. Anything to say to the public, your fans, or your fellow fighters?”

Korin: “I was impressed with how well everyone fought, there were a lot of very close matches, back and forth rounds, and tied rounds. That Christian guy came out of nowhere to put on a show. I was really hoping to get the rubber match with Sinya in the finals. She had a good fight against me, but I know I can do better. The guy she barely beat, barely beat me, and I feel like our third fight would have gone differently. Don't forget Sinya, we're 1-1, and I'm coming for that belt! Ooohhhh Yeeaaaah!!”

Roe: “That’s what we like to hear! Thanks for chatting with me, Korin, I appreciate it.”

The interview ends abruptly, cutting to an empty fighting enclosure where the grand finals had taken place a few hours prior. Unpaid interns slowly pick up refuse, left by the unruly patrons. A single unconscious Sauvax can be seen being attended to by paramedics. The large flood lights setup for the fights switch off and the entire fighting enclosure goes dark.

“Thank you for tuning in to our recap broadcast of The Skulls Swoop Gang’s first season of the UFC Grand Prix. We’ll catch you at the next season of the Grand Prix, folks! Maybe next time, we’ll see someone take the throne from Sinya Ani as the next UFC Grand Prix Champion! Up next: Local Woman Claims Kowakian Monkey-Lizards Ate Her Baby…” The ceaseless blabbering of your holoprojector yammers on, as it returns back to its regularly scheduled programming.

Special thanks to Galia Winters for the Championship Belt custom and San Krar for the art in the first photo, as well as the news outline. View more of San's work here.

View the results of the tournament here and join The Bad Alibi Bar and Grill to view the actual fights themselves or participate in future fights.