What is a swap meet? Who is Uli-ah Gafsa? Where on Tatooine is this happening? Why should I care about this GNS? All of these questions and more are being asked as sentients from Sevetta to Serenno seeking to learn more about the second largest cultural export of Tatoo. With the swap meet coming up on Day 112 this article seeks to address most of these questions as well as some others. 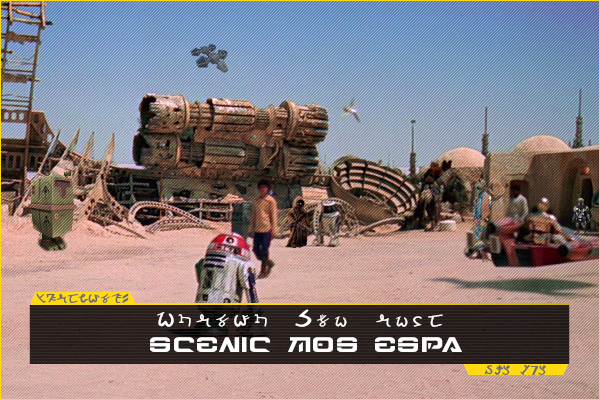 The metropolis of Mos Espa braces for the influx of tourists with additional wreckage.

The first galactic-wide swap meet was hosted nearly 10 years ago by notable Jawa Uli-ah Gafsa. However, due to human political issues plaguing Tatooine at the time it simply was not possible for many to safely travel to the planet, leading to swap meets having been organized at various neutral locations around the galaxy. Shortly after Uli-ah would go on to lead a criminal organization and commit a string of thefts, lootings, and murder before eventually being killed by a different criminal organization, thus resulting in others taking up organizing the swap meeting and giving it the name “Uli-ah Gafsa Memorial Swap Meet”. This is the event most will associate with swap meets, and until now due to the political situation at Tatooine it was impossible for it to be held at its historic location. However, with the recent return of control of Tatooine to local Jawa governance it was decided to restore at least a portion of swap meets to the Jawa homeland.

Those visiting the swap meet can expect far more excitement than simply attempting to haggle for cheaper purchases. Located on the outskirts of Mos Espa, a historic trade hub known for its frequent trading bazaars, podracing, and violent cartels, an array of exciting competitions are expected to be present. This notably includes the droid hunt, a variant of the death hunt seeking to test contestants skill at capturing droids, something which is incredibly fitting with droid theft being the largest cultural export of Tatoo. Several racing events are also expected, including the sandcrawler race where competing crews push their machines to reckless limits and a soon to be unveiled space race that passes through the atmosphere of Tatooine. Naturally, as is the spirit of swap meets, more events are expected to appear as representatives from businesses and sporting associations around the galaxy descend on Tatooine.

With the swap meet just around the corner, the time is now to set off For more information, sentients are advising to contact the Tatooine tourism bureau. Jawas have been advised to keep droid theft at the minimum to encourage economic activity.

Intergalactic was removed, JIM theologians insist that only one galaxy exists and it is shaped like a Jawa.

Mentions of Hutts around Mos Espa were removed due to a lack of advertising payments made by local Hutt cartels, clans, or consortiums.

Uli-ah Gafsa portion was shortened due to the sheer number of crimes committed by that Jawa.

References to large numbers of roaming Krayt Dragons were removed (despite their presence) due to fears of discouraging visitors.