A female Nautolan reporter stands in a vast hall lined by ice sculptures. At the centre, a large fountain modelled after the Issor system towers over the people below. The hall is buzzing with activity as patrons mingle and enjoy the festivities.

"Light shows, ice sculptures, and hors d'oeuvres to die for - just a few of the delights on display as the Galactic Bazaar celebrated its first anniversary this weekend. The docking bays were full as local celebrities, businesspeople, and government representatives arrived at this exclusive black-tie event."

The camera cuts to footage of the station exterior, lasers coordinate in a phenomenal light show. Next, a cavernous docking bay lined with shuttles and light freighters. Mechanics and valets are hard at work, and sentients of all statures make their way down the red carpet towards the main hall. The footage returns to the Nautolan reporter.

"Boasting nearly twenty vendors from across the galaxy, along with it's own cantina, art gallery, and philanthropic society, the Galactic Bazaar has changed the spacescape of the Issor system. The independent chamber of commerce behind the endeavour has transformed this former backwater into a thriving commercial hub. Amongst the guests invited to speak at the prestigious event was Major General Eli Descartes, Resistance security liaison to the Bazaar. Although he may have been keen to announce a generous assistance package for the station, the galaxy had something else on its mind."

The footage cuts away once more. A rugged Alderaanian male of average height steps up to an elevated podium in the main hall. A significant crowd of patrons and press has gathered. He smiles and begins to speak.

“The Galactic Bazaar is truly something special, and The Resistance is honoured and humbled to have been able to sponsor such a project. In its inaugural year, billions of credits have flowed through these halls, and with them, thousands of job opportunities and boundless prosperity for the people of Issor and the outer rim. This was always an ambitious project, and one that has grown beyond our wildest predictions. Naturally, such prosperity will attract attention from the unscrupulous, which is why today, on behalf of The Resistance, I am proud to be able to sanction a security assistance package consisting of state-of-the-art security systems, non-lethal weapons aid, and training from our finest military police instructors. The Resistance is investing hundreds of millions of credits in the hopes that the Galactic Bazaar may forever remain a safe and prosperous bastion of free trade. I would be happy to answer any questions.” 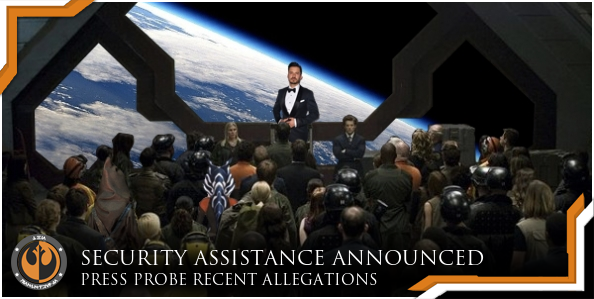 The crowd erupts in a thunderous applause. As it dies down, members of the press clamour for the Alderaanian’s attention. He begins to select them at random.

Reporter: “General Descartes, why is this package necessary?”

Descartes: “Chief Thresk Vondon and his team work diligently to keep this station safe, and as a result they have thwarted several subversive acts in the year just gone. This aid will act as a deterrent to criminal elements and ensure that the security team has the tools and training it needs in order to continue to ensure the safety of all on-board.”

Reporter: “Can you elaborate on these ‘subversive acts’?”

Descartes: “I am not at liberty to disclose any details, other than that they were not successful.”

Reporter: “What do you have to say about recent claims from King-Father Dragoneel that The Resistance is ‘extorting’ the galaxy?”

Descartes: “Evidently, Dragoneel would rather have every pirate and privateer at the helm of a military warship, jeopardizing the safety of his citizens. If that is his idea of order and peace, then the Faerytail Family must be living in a fairytale galaxy.  Now, if we could please circle back to the topic at hand?”

The clamor intensifies as members of the Press rally behind the new line of questioning.

Reporter: “But is it true that The Resistance didn’t pay any research and development  costs toward the Kandosii-type Dreadnaught?”

Descartes: “This is hardly breaking news, is it? It has already been well established that our ground, space, and intelligence assets were better trained, better equipped, and better motivated than their Imperial counterparts. We paid in far more than mere credits, and we are all safer because of it. I will not be taking any further questions, thank you.”

Even though he is unable to hide his frustration, Descartes smiles politely and nods as he leaves the stage. Journalists continue to press for further comment. The footage cuts back to the Nautolan reporter.

"Although General Descartes was quick to play down the explosive accusations, the fallout may yet be around for some time."