Members of the Jawa Exploratory Salvage Squadron were pleased to report the discovery of a previously lost system, ripe for colonization and exploitation by corporate interests. The planet was initially expected to be used by a combination of the notoriously hazardous Jawa mining industry as well as the growing Jawa tourism industry who expected to turn Secundus Ando into a prime tourist destination. However, hideous harch hordes have hurt holidaymaking happenings. In this Jawa news special release we attempt to answer how this system got discovered, what is being done with regards to the terrifying spiders, and the future of Jawa tourism in the system. 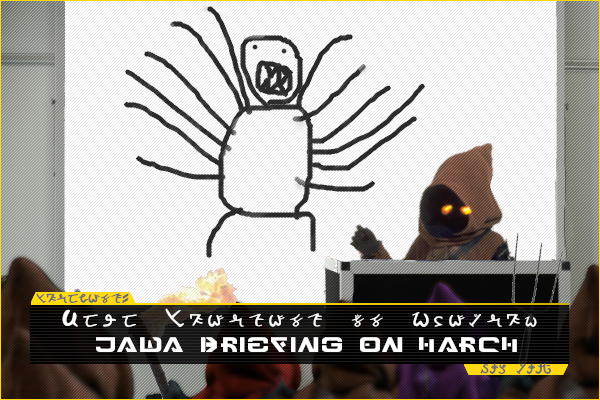 Jawas being prepared to meet with the Harch race.

As the galaxy is now well aware from the earlier paragraph, the Secundus Ando system and its two orbiting bodies were discovered by Jawa scouts several weeks ago. Jawa expansion has been repeatedly thwarted by “other people” with “significant military might” preventing colonization and mass exploitation of planetary resources, leading to Jawa’s searching for locations increasingly far away from their homeworld and headquarters of Tatooine. Upon discovery of the Secundus Ando system the Jawa Invasion & Colonization department was quickly notified in order to ensure Jawas took full control of the system. Debate is still ongoing on how Jawa’s could discover an already clearly inhabited system and as such have a valid claim to exploit its natural resources. Notable Jawa leader Ini Kedi has stated that he “is confident that we have a valid explanation somewhere” and the task of generating a retroactive claim has been turned over to chief spiritual authority Tilba Ugama in the hopes that magi archaeologists and theologians will find a relevant ancient prophecy or land deed.

The issue of existing native populations has proven to greatly complicate colonization of the system. Inhabited by giant creatures with dozens of limbs and a surprisingly competent navy, Jawa authorities reportedly first considered a number of defensive installations, codenamed “ring of fire”, to contain the terrifying spider people. The Harch people, a horrific and backward people with confusing customs and who cannot understand even the most basic Jawa trade talk, have proven to be remarkably against being colonized for the greater good of Jawakind. Through a complicated system involving protocol droids the Jawas determined that the local Harch “government” isn’t overly interested in being used as a stepping stone on the glorious path to Jawa profit. However, the Harch government didn’t seem overly bothered by Jawas colonizing the “utterly unlivable” Secundus Ando II, which has an atmosphere and terrain remarkably similar to that of Tatooine.

Jawas are reportedly buying packaged holidays to this newly colonized planet of Secundus Ando II at record speeds, seeking to enjoy a slightly different desert for a change of pace. Some Jawas have even considered moving permanently, hoping to capitalize on the new planet’s exploitation as well as to escape perceived arsonist threats on Tatooine stirred up by humanoid media in recent weeks. The Jawa Domiz Cuk has reportedly brought the Cuk clan record profits by selling packaged holidays before any infrastructure existed on the planet whatsoever. The lava rivers and record heat on the southern end of the planet form a perfect “dry sauna” and only having one sun greatly simplifies umbrella placement for enjoying a sunny day. Some brave holidaymakers have even started to visit Secundus Ando I, looking to enjoy the more varied environment and to interact with the robeless natives. 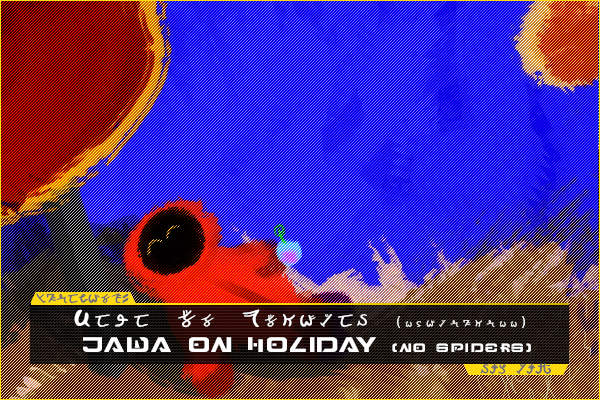 Nobody can be sure what the future will hold for Secundus Ando. The only thing that is clear is the previously isolationist Harch people have been forever and irrevocably shifted into the spotlight of the galaxy, utterly decimating their previous tranquility. However, there is also great opportunity in the galaxy, and only time will tell if this ultimately turns out to be good or bad for their people. Similarly, the future of Jawas in Secundus Ando and the larger Lambda sector is uncertain. Only time will tell if Jawa Offworld Enterprises will continue to invest in the system or if they’ll abandon it for more profitable endeavors. The only thing that is certain is terrifying spider people have been seen departing Secundus Ando for systems around the galaxy.