A guerilla force of the infamous Death Watch cult scored a cascade of battlefield victories against the Mandalorian military, one of galaxy's oldest Mando’ade forces. GNS journalists witnessed the decisive battle in a rising civil war.

HONOGHR, Kessel sector — The Kyr’tsad fighters whooped, cheered and pointed excitedly to a puff of smoke in the sky, where a Mandalorian military patrol vessel screeching over the urban district minutes earlier had been struck by a missile.

Smoke turned to flames as the stricken craft broke in two and hurtled toward the ground. Later, in a stony field strewn with smoking wreckage, scavengers picked through twisted metal and body parts. For the Death Watch forces, it was only the beginning.

“Oya, Kyr’tsad!” shouted a blue-armored warrior with an RSP-6 launcher over her shoulder.

The downing of the craft offered bracing evidence that the conflict in the Honoghrian system was about to take a seismic turn. A Death Watch guerrilla army had been fighting to break through a planetary blockade by the Mandalore military in a civil war marked by atrocities and starvation. Now the fight seemed to be turning in their favor.

The war erupted midway through Year 23, when the re-emergence of the Death Watch cult, a warrior sect following the ancestral Mandalorian traditions, exploded into violence.

Since then, the fighting has been largely hidden from view, obscured by communications blackouts and overshadowed by the disappearance of proclaimed Mand’lore Kai Oryk. But during a pivotal battle, I went behind the front lines with a photographer, Peter Shalas, and witnessed a cascade of Kyr’tsad victories that culminated in their breaking the blockade, and altered the course of the war.

We saw how an outnumbered Death Watch force overcame one of the largest armies in Kessel through force of arms, but also by exploiting a wave of popular rage. Going into the war, Nogrhi Mandalorians were themselves divided, with many distrustful of a governing Mandalore seen as tired, weak and corrupt.

But the promise of return to a warrior culture offered by the Kyr’tsad and their growing victories on the besieged planet — united many Noghri clans against Korlan Mereel’s government, drawing highly motivated young recruits to a cause that now enjoys growing support.

“It is like a flood,” said Lazarus Grimm, Overlord of the Death Watch, as several thousand Noghri riflemen and melee warriors, many whose beskar’gam was already blackened and battle-scarred, marched past en route to corvettes and blockade runners. “Verman verde joruur.” 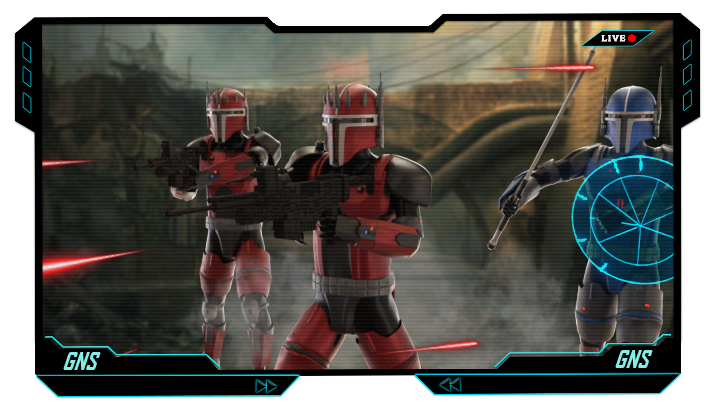 In a self-assured address to his commanders the day that Death Watch re-emerged, Mandalore leader Korlan Mereel insisted that Death Watch had arisen and disappeared before— the warrior cult were nothing but lowly pirates and no matter.

Seen from the ground, though, Noghri Mandalorians have been slipping through his fingers.

In the past several months, Death Watch fighters have infiltrated academies and barracks left carelessly open; raided stockpiles throughout Honoghr; recruited over 2,000 Noghri to their cause — and broken through a seemingly impenetrable blockade.

In recent days, Kyr’tsad leaders have expanded the offensive to new parts of the Outer Rim, vowing to stop only when the weakness of Mereel and his followers have been expelled from their ancestral land.

“If we are prepared to march into hell and back again,” said Overlord Grimm, “Te dral venke'gyce.”

Samasca Dedclar is a GNS Outer Rim correspondent. She was previously based in Gazaan, covering the Kira CW sector. She previously worked for the Gazaan Planetary News Network and is author of the holo, Derra and Me. @samdedclar