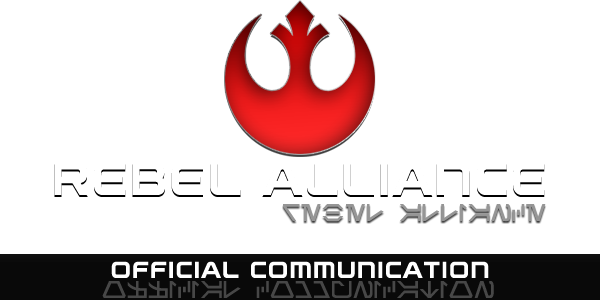 Rebel Alliance operatives from the famous Legacy Battle Group (Special Combat Unit) have managed to retrieve several assets under Tresario Star Kingdom (TSK) control. The group known for now integrating the Rebel Alliance Intelligence, and led by the Intelligence Lieutenant General Karl Hawkmoon, and Intelligence Major General Mezrakh Irwalh, has been a key operational group since the New Republic era, and now, post the fall of the Republic, they have been conducting several operations to protect the rising new Rebel Alliance.

In a swift operation, planned by Supreme Commander Orion Chran, and executed by LBG, the operators have infiltrated shield holes in Ku'Bakai VIII using clandestine ships tagged for sale. According to Int. LTGEN Hawkmoon “the planet had far more holes in the shields than it was anticipated by our initial scouts”, and also according to Int. MGEN Ir`walh “... we were surprised how poorly stocked their equipments were, warehouses open, and waiting to be retrieved for the right cause”. Upon reaching the key locations, the TSK security forces stationed at the planet were taken by surprise, and before they could do any sort of response, the operators managed to contain any possible threat.

Legacy operators not only quickly retrieved several items that were lost post the fall of the New Republic, but also managed to secure several assets from TSK to be used against the Empire and its allies in the ever going Galactic Civil War. From gears, vehicles to ships now once more at the service of freedom. The operation was a success, along with securing and retrieving countless assets, the authorities of TSK were unaware that the raid was actually conducted by Rebel Alliance special operators.

Want to join the fight against the Galactic Empire and its Imperial Union?

The Rebel Alliance is known for fighting to restore, once more, freedom and liberty across the galaxy, supported by several rebel groups. The tyranny of the Empire that suffocates the people of our Galaxy will reach an end by the hands of the people of the Galaxy. Democracy will be restored, and the authoritarian leaders of this evil Empire, led by Sith cultists, that preach on the dark side are their own proof of a distorted order and security will be defeated.

The glorious days of the Republic shall be restored, and you, citizen of the Galaxy, join the fight to bring down this fascist empire. The Rebel Alliance is made by people that consider all sentient beings as equals in rights and liberties. Everyone is equal in the eyes of the law. Join us, and together we shall defeat the evil Empire.