Rodia, TYRIUS (RNN) – In the brightly lit Atrium of the Galactic Museum, the New Republic gathered their friends in a brief respite from the ongoing political conflicts in the hope of ensuring peace for the Galaxy. All were encouraged to set aside titles and revel in one-another’s company.

The Galactic Museum, opened in year 14, provided a fitting backdrop for the festivities. Although the structure was built with the aim to exhibit all technological artefacts, the gigantic station has also served as a reference point for the cultural life of the galaxy. For this special occasion, the multi-purpose room was transformed into a grand ballroom where guests from different races have exchanged ball partners, as well as their cultural and historical heritage. Music, fine wine, elegant dining and dancing provided a backdrop for old friends and new acquaintances alike to mingle and celebrate. 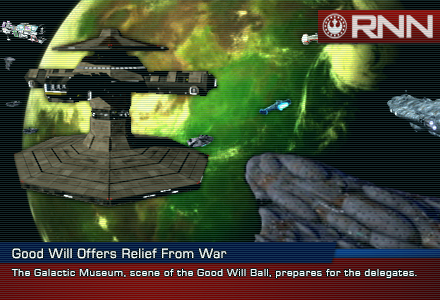 For this rare occasion, a brilliant crystal chandelier reflected lights onto the walls, adorned with gilded mirrors. Outside the floor-to-ceiling windows, the green of planet Rodia hinted at lush forests along with a vast array of the guests’ vessels.

The museum exhibit halls remained available for all to admire, with many attendees taking the opportunity to visit the public display or large arboretum. Cultural and technological achievements of all races in the galaxy were gathered at one place, showing a beacon of hope for a galaxy to exist harmoniously.

Sentients from the assembled overwhelmingly expressed appreciation for downtime in a galaxy struggling with conflict and war. Kalzel Gryjiss of the Krath Dynasty stated: "There are still those small pockets of peace in the Galaxy. It's nice to be in a room full of people that don't want to decorate your face using a blaster rifle. Being a Krath soldier, I certainly get my fair share of combat and things like these remind me of what we are actually fighting for."

Another attendee, Ms. Anniasha Shahir of the TIEFE government declared of the evening: “I would have never dreamed, we, all of us would have shared so much fun and splendour in all assembled tonight. I think we all forget how close we are…and it is so rewarding to share that with our friends. This is truly lovely…just lovely.”

Although political analysts would suggest that the recent treaty revisions have strained relationships within the Galactic Alliance, the atmosphere on this evening was one of shared joy and ease. With notable representations from nearly every member state of the Galactic Alliance and other allies, the gathering provided a moment of peace in the long preparation of war against the Imperial Union.

Family and friends--both old and new--enjoyed a raucous but peaceful evening well into the night. The Ball included attendees from The Infinite Empire, Krath Dynasty, the Jedi Order, the Invid Order, the Arkanian Engineers, TIEFE, the Triumvirate Coalition, Rogue Squadron, and the New Republic. Although different in leadership, ideologies and beliefs, the gathered were eager to reaffirm the right of all Citizens in the Universe to freedom and a peaceful coexistence.