RNN Headquarters, REPUBLICA — High General Orion Chran, the New Republic’s most senior military official, has been elected to the highest political office of the state on Y18 D3. Chran replaces Endaro Kassan, who has successfully completed two terms in office. The conclusion of a week-long polling period saw Chran win with 63% of the popular vote, assuring the New Republic of a continuation of the most productive period of stability and development that it has enjoyed in recent history.

Campaigning took place in the weeks prior to the poll, with traditional question-and-answer sessions organized across selected cities and outposts, and broadcasted widely. The general climate was perceived to be more intense than that of the previous elections, with the campaigns characterized by the domination of social holomedia over more traditional platforms. As increasingly popular channels of communication, they offered candidates a chance to engage personally and informally with two important and collectively dominant blocs within the electorate: youths and citizens from less-populated regions. 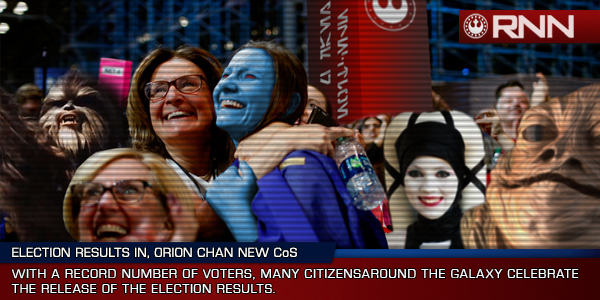 "It is heartening to find voters so motivated and knowledgeable about, on one hand some very grounded issues and on the other, high-level, constitutional matters. They ask such penetrating questions," a Ministry of State spokesman said. "It is clear that they desire to be involved, not necessarily to take up a career in politics themselves, but at least to ensure that their voices are heard. It is great that the democratic process is encouraging sentients to express themselves in quite unprecedented ways."

Running against Chran were Senator and General Darcks Galvan, and Lahasa Fy, a former Senator and Minister of Trade and Industry. Despite the solid credentials of the other candidates, it was speculated that the strong confidence held by New Republic citizens in the popular Chief of Military Operations would translate into a largely uncontested walkover. Chran was not without his critics, however, who cited fears that his decade-long career in the military and his tenure as deputy chief during the Kassan administration might hamper his ability to bring fresh ideas to the table. Political commentators have noted that, in fact, Chran’s very background would prove to be a welcome change, contrasted with outgoing chief Kassan’s experience which lies entirely within the civil sector.

Speaking at a press conference this morning, Chran pledged to “bridge previous divides” within the New Republic, and between the New Republic and her allies: "I will work on improving our relations, building a stronger base whether it's individual allies or the Galactic Alliance. I want to steer us to focus more on the Imperial Union… let them see the ground we gain in the fight. I will press our efforts to disrupt our enemies’ growth.”

On the domestic front, he said: “Our own citizens are what makes the New Republic great. I will empower us to explore both new and old methods to increase the quality of life for all citizens. I would like to to continue our current growth with our nationalized factions and Private Sector Affiliates… with additional development of our systems as well as expansion our borders.” Additionally, he touched on further constitutional improvements, and on continuing efforts to embrace diversity, offering how the military had gone as far as modifying its A-Wing cockpits to accommodate all races, “even for a hutt in the [military] Reserves”. 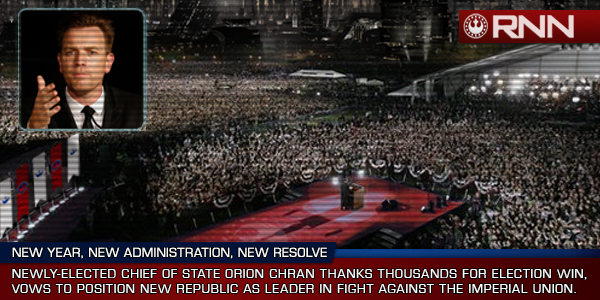 Chran has also reaffirmed his commitment to current projects, instigated by Kassan and his predecessors, such as the System Defense Groups, and the Knel`char III mega-development enterprise. Amidst a persistently challenging galactic political climate, the Kassan administration has brought impressive economic and military growth, widespread planetary developments, improved welfare standards throughout the New Republic, and improved internal communications.

Faith in Chran’s leadership extends to the wider galactic community, where he is highly regarded by allies who have witnessed his strategic and tactical prowess in the field and behind the desk. Shortly after the election results were in, Supreme Commander Crueya Vandron of The Resistance met with the new Chief of State to reaffirm its commitment to the alliance. Lord Vandron commented, "Together we will continue build upon the close alliance and friendship between our people, so that we may stand united in our opposition of the tyrant and corruption that is the Empire." Grand Admiral of the Rogue Squadron and Secretary General of the Galactic Alliance Jake Azzameen assured Chran of “its continued and dedicated support in your fight against the evil menace, which is the Galactic Empire. We wish to re-emphasize our hearty relationship with you… know that the New Republic and its citizens will be in your good care.”

Nothing unexpected may have come about during this election. But perhaps the greatest revelation to emerge from the process was this: that democracy is alive and well. Voter turnout was almost double that of the previous year's, and the highest of the past four years. It is a tribute to the citizens of the New Republic that they care enough to head out in droves to engage, to vote, and to make a difference.