NRAF Operational Command Center, HOSNIAN -- In a collective voice of opposition, both Galactic Alliance and Non-Alliance Forces have united with the New Republic and continue to thwart Emperor Seele and his desire for unilateral conquest of the newly discovered Hosnian System for the Imperial Union. Despite the close proximity to other Imperial Core Worlds and their ongoing show of force, multiple planets are now secured in the protective custody of the New Republic government. Though Operation Urgent Fury has already been deemed successful, New Republic officials have indicated that allied forces remain vigilant, committed, and will continue to secure strategic footholds in the sector.

Immediately after the Hosnian System registered on galactic star maps and databases, select New Republic leaders were dispatched to evaluate the system. Within hours of initial mobilization, High Marshal Mami Ogawa and High General Leebri Chelski made the call and a large detachment of New Republic Armed Forces (NRAF) were called up for a full-scale military operation. Operation Urgent Fury was born. 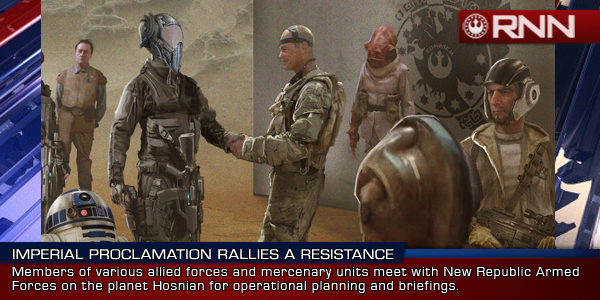 As the rush of preliminary colonizations of the new system began, the New Republic began receiving numerous offers of both trade and assistance. Though some initial setbacks were reported, a growing tide of assistance and cooperation began to take root. By the time the NRAF were in position to begin pushing back Imperial forces, contracts had been established with the Flower Company, the Wraiths, Aeyris, and other various individuals and companies. Despite the odds between the parties, a temporary truce was agreed upon with the Zann Consortium focusing on our mutual enemy. The publication of the Empire’s proclamation solidified this universal resistance to Imperial rule and set the foundation for continued and unprecedented cooperation between all forces. With the arrival of the Galactic Alliance forces of the Triumvirate Coalition, The Resistance, the Duchy of Tolonda, Stryker Military Services, and Rogue Squadron, ground was gained and success became an obtainable goal.

All over the system the battle raged on, every inch of land secured was hard fought. Cat-and-mouse tactics dominated the field; often times delaying construction efforts and making skirmishes frequent. Official New Republic Intelligence reports indicate a high death toll for New Republic combat engineers and construction specialists captured by Imperial forces and those aligned with them. Chief among these parties were the Bounty Hunters Guild and The Faerytail Family. In many cases, the Imperial's ruthless and barbaric lack of respect for life is well documented. Despite this, the New Republic went to great lengths to ensure that all Imperial detainees are treated fairly and with dignity. Republic Medical teams are also reporting severe malnourishment and medical conditions of those who are considered less than class A citizens under Imperial Law. Still, allied forces never let their efforts dwindle, capturing Imperial forces and land alike.

The Galactic Empire as a result of the ongoing conflict in the Hosnian System have lost a number of key personnel to the forces arrayed against them. Though initial communications with the Galactic Empire hinted at a hope of a prisoner exchange, the lack of response from their government has left a lasting impact on the detained. Depite efforts to secure this exchange many have sunken into a deep depression, giving up on life itself. After further information surfaced suggesting confusion about or a lack of knowledge of the potential exchange within the Imperial High Command, New Republic officials are beginning to wonder if the fate of these detained individuals is an unwillingness of the Galactic Empire or that of just the Emperor personally.

For many of the New Republicans engaged in Operation Urgent Fury, the tragedy of Operation Heartbreak was still on their minds and has been a rally cry for many seasoned veterans and survivors alike. Operation Heartbreak, commonly known as the Trellen Conflict, was a operation spearheaded by New Republic Forces in conjecture with Holowan, now the Resistance, to liberate the Planet Trellen III from Imperial rule. After the betrayal of a high ranking member of the NRAF, the Galactic Empire was able to infiltrate the operation and subsequently captured and killed numerous Republican officers. High Marshall Ogawa recalled, “we [the New Republic] were betrayed and had good people die at the hands of the Empire, and now...this victory has honored the memory of the citizens who lost their lives that day.”

At this time, Operation Command has not release any timetable for a cessation of military activity. With the recent transfer of planetary holdings of the planet Courtsilius from the Nova Blades to the New Republic, it is safe to say that the NRAF will have a substantial presence within the system for the foreseeable future. Other government agencies are also actively working on other relief aids; be it medical, economical, or environmental. The New Republic government is also concerned of the impact on the environment with this rapid colonization efforts. Environmental experts with the Ministry of Natural Resources have been working with prospecting teams and mining efforts to ensure that indigenous species, like the Snowbird of Hosnian Prime which is the iconic image of the Operation, will be able to thrive after the conflict has ran its course. With so much on the line, and an acknowledgement that the fight is far from over, the New Republic, together with her allies, will continue to oppose the Emperor and ensure the people of the Hosnian System always have security from the subjugation of the Imperial rule.