If At First You Don't Succeed... "Try Try Again" May Not Be For You.
Posted by: Astrid De LaRouge, The Faerytail Family
Date: Year 20 Day 132 Onboard the Victory I-class Star Destroyer TFF Sylph Savagery in system Mechis (29, -147). 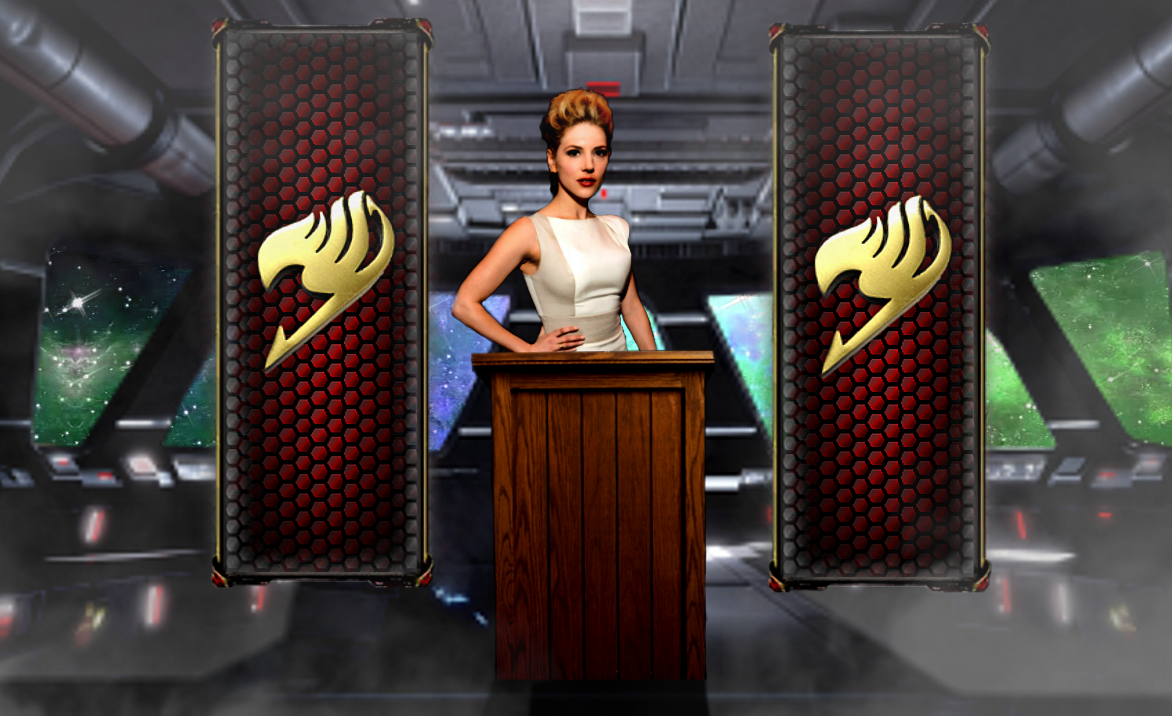 On the bridge of the Victory Star Destroyer "TFF Sylph Savagery" and behind a pedestal stood a tall woman in a white suit. As the feed from the Hologlide J57 cam droid began, words scrolled on the bottom of the screen declaring the speaker as Astrid De LaRouge, Queen of The Faerytail Family.

"Good evening sentients of the Galaxy. Today, I bring you news of the war on Krmar II. The two month long skirmish which is locally known as The Second Battle of Krmar II, between the united forces of the Imperial Union and the joint forces of The New Republic and Duchy of Tolanda, surged again yesterday with the bloody execution of yet another member of the opposition forces.
This isn't the first major loss by the usurpers during this conflict since the capture and enslavement of Corey Vildras (Duke of Tamra, Keeper of the Seal, Chief Cookie Maker, etc. etc.) for war crimes, and the executions of Adin Cole (Margrave of Oshara) and Vellan Mun-Riliin (Royal Corsair and Intelligence member) precede this latest casualty.

Due to the many casualties on the side of the Duchy, the New Republic dropped over a thousand droids that have created a complete unmanned sensor grid of every Duchy city on the planet, a grid that is strangely impervious to our attacks. Also intelligence reports within the Duchy informed that as of about five days ago the New Republic command had taken any Leadership control in the war away from the Duchy due to their ineptitude, another large blow to the Duchy's vaunted ego.  Unfortunately for the New Republic, it was simply not enough... Today they mourn the loss of one of their own."

The feed the Hologlide J57 cam droid transmitted flashed images of the deceased New Republic Knight, Lieutenant Colonel Freddie Hawkmoon, as well as images of an imperial blockade over the planets surface, a trap laid by Tresario Star Kingdoms very own Ro-nin Lin.

"After his capture, Lieutenant Colonel Freddie Hawkmoon of the New Republic was relieved of his lightsaber and was immediately executed by a military commander of Tresario Star Kingdom, Captain Ro-nin Lin, per protocol.  An expertly laid trap by Captain Ro-nin allowed him to subdue his enemy safely and without any casualties or damage to himself. He is certainly entitled to his reward and is to be commended for his success on the battlefield.

I was able to have the chance to interview Captain Lin after his military achievement and I asked him how he viewed the Union's military cooperation during the Second Battle of Krmar II as well as to how he felt his fellow Tresarians had contributed...
In response he said: 'It has been two months now since Tresarian Navy troops joined forces alongside Imperial and Faery troops to form a Joint Task Force to evacuate Krmar II citizens as well as to repel the invading hazard. In those two months, the team-work and the high-level cooperation really impressed me. The results we have accomplished this far in the Second Battle of Krmar II clearly speak for themselves. As a Tresarian, I honestly can't imagine any better brothers in arms to fight alongside, so that every Faery, born and raised on Krmar II, can witness the freedom that we so proudly hail in the Kingdom and in the Imperial Union. Thank you.'  Similar sentiments have been echoed by the Imperial commanders as we all work arm in arm during this struggle."

Queen Astrid continued as more images flashed across the screen portraying the lightsaber and battle armor claimed by Ro-nin as trophies from his kill.

"Reports from internal affairs show that New Republic activity diminished due to the lies fed to them by their supposed ally, The Duchy, that they were gaining the upper hand during the past week of the conflict. However their estimates were far from correct and their mathematical mistake (or purposeful misdirection in order to get someone else to fight the Duchy's battles) more than likely contributed to the capture and execution of Lieutenant Colonel Freddie.  Once a rising star in the New Republic the former Lieutenant Colonel was a Knight of the Republic, receiver of a Promising recruit award in Y18, receiver of a Military Exercise ribbon in Y19, and apprentice to Knight Councilor Gothar Elensar.  This latest death comes at a time where the opposing forces have yet to even complete one third of the work needed in order to threaten Faerytail control of the planet.

In other news, disgruntled Tolandans report that the usurpers plan to downplay the loss of yet another one of their own as only a slight setback despite the enormity of the casualties sustained... Reports state that the New Republic and The Duchy of Tolanda have lost more than twelve thousand troops throughout the duration of this conflict.  The latest count as of a couple days ago was 12,469 confirmed kills that are split between The Faerytail Family, Tresario Star Kingdom, and the Galactic Empire and the numbers rise daily.

We here at Faerytail would indeed be heartbroken at the loss of even one of our own, and it is indeed hard to imagine that the New Republic wouldn't feel or mourn the loss of one of their valuable Knights of the Republic, much less the thousands that have been slaughtered in this pointless conflict....  A conflict that is not even their own.  Galactic commentators that had previously applauded the Duchy leaving the Galactic Alliance as being a positive thing for the rebels now wonder how desperate the New Republic is for allies to continue to support such an incompetent regime."

The image on the holographic transmission flashes and changes to a different angle of the Faery Queen.

"Whatever the perception is on the amount of damage the New Republic has suffered during this war of foolish pride, the damage done to the Duchy has been termed 'catastrophic'.  Not only has the Duchy lost two of their nobility, one of their military commanders, and the 12,469 troops reports have also surfaced showing the economic and morale damage that will ail the struggling government for years to come.  Everyone knows that democratic control of a planet is directly affected by majority of population support.  Any population that is controlled by a third party already is counted against the population that support the majority.  In the Duchy's ignorance they have spent a reported little over a billion credits to criminals and terrorists to bribe their population to support the Duchy.  We at Faerytail were aware of this and simply tried to raise the prices that the terrorists were selling for in order to further cripple the Duchy economy without changing the amount of work the Duchy needs to accomplish to threaten our control at all. The Duchy cannot expect to buy the loyalty of the masses and expect to attain planetary control without attaining a proper foothold! Reports of famine and bankruptcy all over the Duchy's controlled territory is the result. During this time of the Great Economic Depression the Duchy is experiencing reports have circulated that the Duchy is looking for investors to try and save their collapse, any potential investors are warned against having anything to do with the Duchy following all the theft and broken contracts the Duchy have done in the past couple years."

“Lastly, on a different subject to this current broadcast the Faerytail Family would like to formally rebuke the subpar reporting done by Shili Free Press about the history surrounding the conflict in Krmar.  After the first Battle for Krmar we did our best to report, in an unbiased manner, the circumstances surrounding our involvement. In order to sensationalize the story and to make us appear lesser than we are, the reporters from Shili strayed from facts and unbiased truth to instead offer a biased and slanderous viewpoint that was heavily influenced by the abominable Hellions.  The true story of the history behind the conflicts in Krmar is attached to the end of this report.

Faerytail and the Imperial Union are committed to the safety of our people, prosperity of our alliance, and bringing the galaxy Order.  Together we shall continue to fight against all rabble that threaten the peace.”