CORUSCANT (IIS) – Celebrations began throughout the Galactic Empire today with the coronation of Empress Ventidius I. Occurring within the Imperial Palace at the traditional time of 13:00hrs Galactic Central Time, Lady Inwe Ventidius was crowned by the retiring Emperor Seele I in a solemn ceremony before Imperial High Command, leaders of the Imperial Union, and the Imperial House of Lords. The event marks a peaceful transition of power for the fourth time in succession. Citizens have been jubilant in welcoming the first Empress to rule as sovereign since the founding of the Empire. 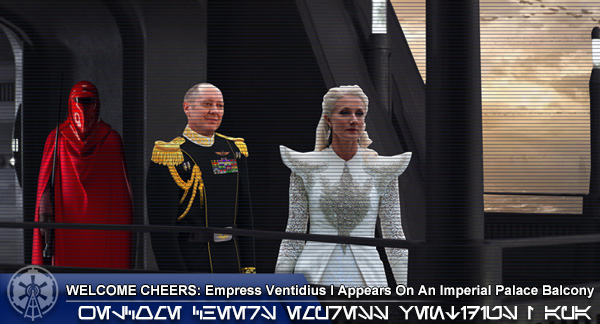 In accordance with tradition, Lord Seele accompanied Empress Ventidius to a low balcony overlooking Imperial Plaza where the awaiting crowd erupted with acclamation for the Empress. Deafening cheers resounded through the plaza, underscoring the popularity of the new Empress. Lord Seele addressed the crowd the first, "Imperials and denizens of the galaxy, I have served you faithfully and diligently as your Emperor for the past four years. In that time the Empire has achieved unprecedented victories that have shaken the very foundations of the galaxy. It has filled me with a great sense of accomplishment to have been your steward as we achieved much together, including the surrender of the New Republic and bringing many worlds into the rightful and peaceful rule of the Imperial Union. It is with the utmost pride that I now hand the task of leading this unmatched empire to my most trusted friend and advisor, Empress Ventidius." The crowd broke into waves of applause as the former Emperor kneeled before his successor.

Having long been a prominent and powerful political force within the Empire, Lord Seele has arguably had the richest career of any Imperial. Serving on Imperial High Command under four Emperors, Lord Seele has made lasting reforms that shaped the Empire into its peerless position within the galaxy. Enlisting with the Imperial Army in Year 2, Lord Seele rose quickly to positions of trust and influence within the Empire, exemplified by his membership of COMPNOR being directed by the then Emperor Charon, followed by the remarkable achievement of becoming Emperor Charon’s Director of Imperial Intelligence within 14 months of his enlistment.

Lord Seele's reign, beginning in Year 18, has been a period of salient stability and achievement for the Empire. Continuing the prosperity and peace established by Emperor Cherokee and continued by Emperor Ndengin, Lord Seele has overseen the surrender of the New Republic, rebuilding the Imperial Military after the overthrow of Vodo Bonias, the inclusion of The Faerytail Family in the Imperial Union, and the establishment of peace with perennial enemies The Krath and the Chiss Ascendancy through the treaties Rachuk and Csilla, respectively. 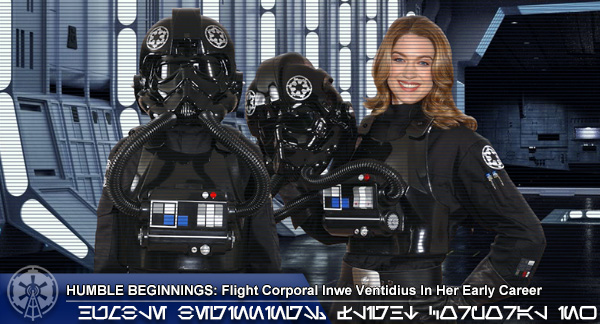 As the deafening roar of approval from the crowd dissipated, the newly crowned Empress addressed her loyal subjects. "Imperials.  Today, the future is spread before us as a tableau.  We are entrusted with a sacred responsibility to secure and protect the galaxy for the generations that will follow our reign. It is a momentous task to carry the responsibility of the future, yet this is an empire built of dedicated and exceptional individuals prepared to assume the heavy mantle, and to ultimately triumph. It is my privilege to lead that glorious advance that will emboss the legacy of this Galactic Empire."

Political analysts note that Empress Ventidius is known to have been a longstanding ally and the right hand of Emperor Seele before his rise to The Throne. Enlisting in the Imperial Navy in Year 9, the Empress' service was of such noted ability she was quickly directed into intentional mentorship by members of Imperial High Command to mould her into a future leader. Ventidius was assigned to a command position with the Ministry of Industry less than a year after joining the Galactic Empire. But there is no better demonstration of her superior abilities and intelligence, than her appointment as the Director of Imperial Intelligence within 20 months of her enlistment.

Having served the Galactic Empire for over a decade, Empress Ventidius has garnered extensive experience throughout her career in the Imperial Navy, Ministry of Industry, Regional Government, and Imperial Intelligence roles. While many of her successes during her tenure as Director of Imperial Intelligence remain unconfirmed by official sources, it is widely believed that the Empress laid the foundational groundwork for the eventual collapse and surrender of the New Republic.

As the pair on the balcony were  joined by Executor Graeda L'Annan, the torch was passed when Lord Seele stepped back from the balcony to join his retired compatriots Lords Cherokee and Ndengin in the rearguard. The rise of the first Empress in the Empire's history has political commentators eager for what this new era will bring for the galaxy. With the recent extensive reforms to the organisation and command appointments across the Empire's military and civil organisations, analysts are already discussing what these evolutionary steps by the Empire will mean for its capacity to meet the challenges of a post-New Republic galaxy. One thing is for certainly agreed upon though, and that is how fresh leadership of the Empire will maximise its potential to the fullest.