*The familiar Chiss anchor of Guild Quarterly speaks to holocorder..* 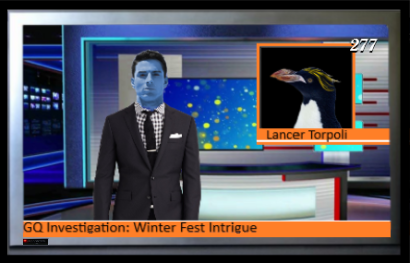 Tonight, we have story concerning the Winter Fest that shook the event to its core.  Usually the Fest celebrating Life Day would not be featured on our broadcast, but a situation has come to light that cannot be ignored.  As you may know, Winter Fest is a celebration of Life day and an opportunity for the denizens of the galaxy to participate in games of chance and skill.  Fest security enforce rules forbidding weapons, collecting bounties, and theft.  But this year, the conventions were broken by a Fest goer and many sentients present took it upon themselves to bring justice to the fair grounds.

Our field reporter, Tukarr Mak, is on the scene with the unlikely story from the North Pole Comet.

*A Kuati male narrates over holovid footage of Winter Fest.*

Winter Fest on the North Pole Comet has become an icon of what Life Day is about.  An opportunity to enjoy festivities in the complete safety enforced by the Gungan and Kaminoan hosts.  The spirit of carnival wafts over the grounds as folks from all over the Galaxy participate in games.  Among the crowd of fest goers are regulars that follow the Galactic Fest Circuit, including a Pengauani named Lancer Torpoli.

Lancer has been described as someone who seems down on their luck.  Attendees have often helped- sometimes hindered, the Pengauani with his issues.  This year was no different.

“I gave him a few candies, then I realized, it was just a sink, and stopped.  Mostly ‘cause I wanted to trade in my candy stock for some animals... I didn't even know Pengauani existed!”-Ikrit Matsumara

“Yes, I gave Lancer candy. It may be because I have a soft spot for Penguin-like creatures, but also because I just felt charitable.  And he’s quite mysterious and polite in general.” - Kenant Wilsor

“I first met Lancer at Ord Mantell, where he was a few tickets shy of a prize he wanted from the festival.  The poor guy always seems to need a little help, but he always pays it back generously.” - Ogban Orineddi

Much to the surprise of fest goers, Lancer was arrested in plain sight by a Gungan named Bar Bar Grems.  This caused an enormous stir.  The well-defined conventions of the North Pole comet were broken, and people wanted to know: “What happened to Lancer?”  Gathering throughout the carnival grounds, an impromptu army of the curious formed.  These sentients were not content to let the disappearance of Lancer go unanswered.  Comet wide searches began within moments of Lancer’s arrest.  At the same time, a story began to develop: Lancer may not have been simply arrested.  He may have been kidnapped by Sith! 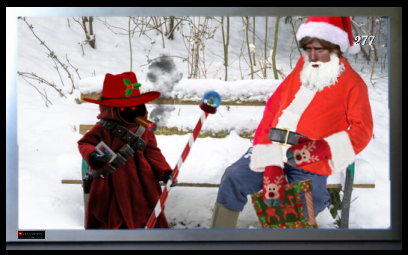 SM: “Yeah, Bif and I got this notion to check the airfield- ”

SM: “You said it buddy..  We found nothing. We saw Diabs out there too.. He was hell bent on finding that Sith Infiltrator.  We hadn’t seen it though.  I couldn’t tell ya if was ever there or not.”

Just as things seemed to cool in the search for Lancer, there was a development aboard the Venator-class Star Destroyer on exhibit at the Winter Fest landing pad.  A plot was brewing in the observation tower of the ship.  It is there that a secret was revealed, and a challenge accepted. 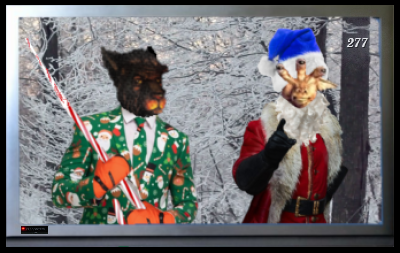 “I unlocked the door by code breaking and saw the bandits and then backed out of the room. Some others led the first attacks and then I went back in.”- Trik Kuh`runi

“Rawth should talk to you. ‘Rawth’ is not my quote.” – Kez (no surname given)

*Cut to security footage with audio.  A Chiss in the foreground is calling to the group behind him…* 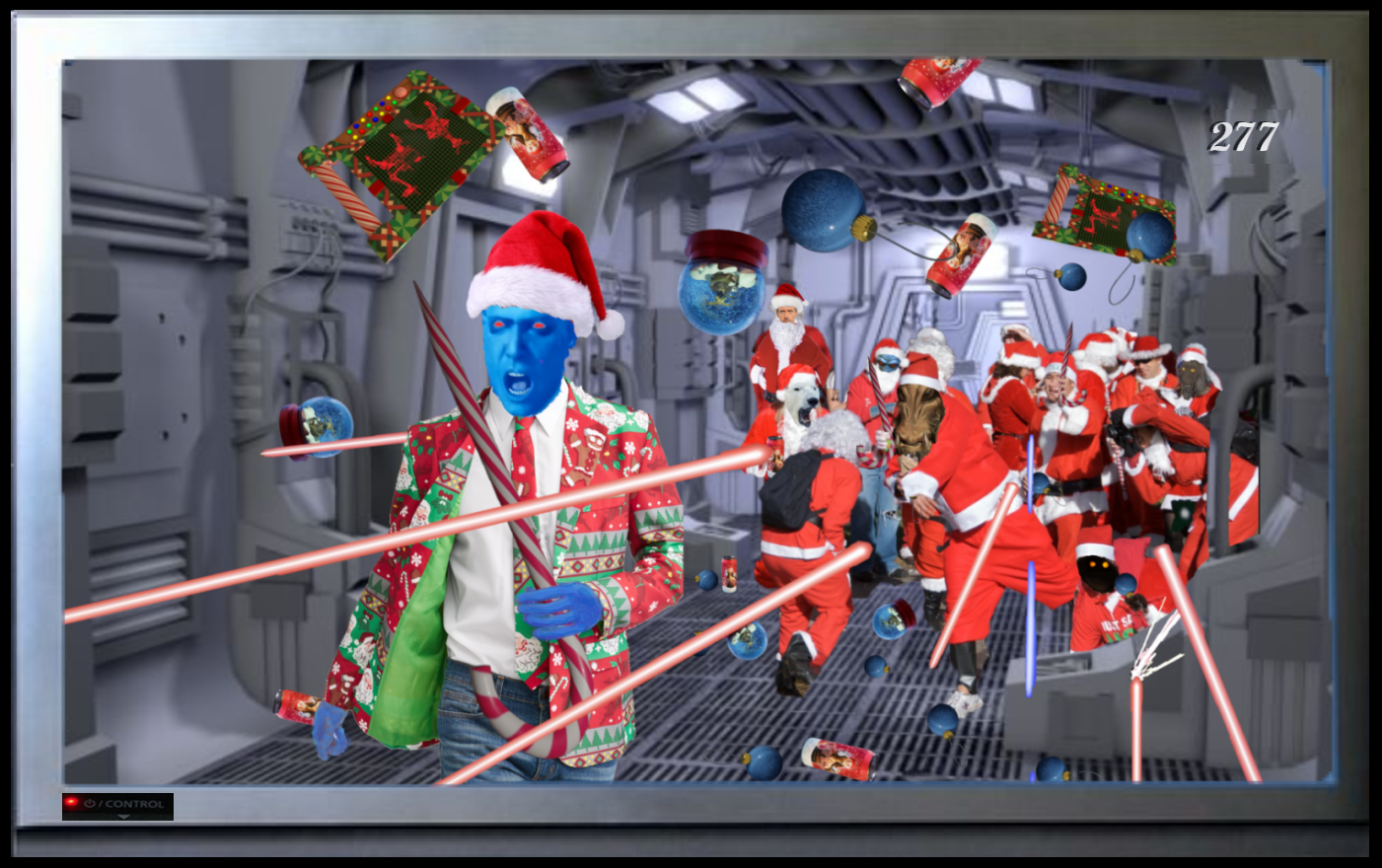 You see correctly: a militia of Fest goers opened the attack with heavily armed bandits.  The would-be rescuers armed themselves with Life Day ornaments, snow globes, and sharpened candy canes.  Casualties were steep, many were pulled to safety and replaced by more of the devout.  It was drive and the absolute crush of fest goers which defeated the bandits.

“Those darn bandits clearly were up to no good; them being fully armed and such.  Probably friends of Bar Bar Grims!  Armed sentients at Fest can only be up to no good- and only the bandits and Bar Bar were seen armed!” – Rawth Shacklefist

After the battle, a piece of information would implicate the very hosts of the Winter Fest in the abduction of Lancer Torpoli.  The Fest goers turned Lancer Liberators found a cloning tank in the room the bandits were occupying with a Gungan tech at the controls.  The rivalry between the Gungan and Kaminoans is well known but has never interfered with the Winter Fest before.  Concerning this cloning tank, the Gungans refused to comment….

*Cut to the Gungan Palace on North Pole comet.* 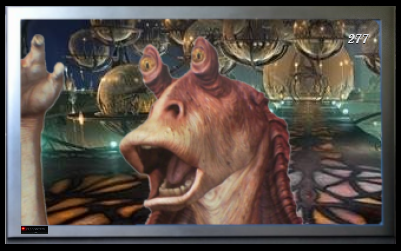 As the Lancer devout and curiosity seekers began to press their demands upon the hosts, more news came from the docked exhibition ship.  Lancer had been found!  He’d been seen in the very tower that the bandits at met their end.  The crowd returned to bring the Pengauani to safety, but all was not as it seemed.  The Lancer they met was a simulacrum and using a L33tese name of “L4anc3r.”

“I knew that cyborg abomination wasn't my friend as soon as I talked to him.  The Lancer I know never would forget the ones who helped him out.”  -Ogban Orineddi

Indeed.  For revealed to the gathered rescuers was a failed clone attempt of Lancer with cybernetic implants.  The demeanor, the warmth… the very soul of the Pengauani, could not be found in this doppelgänger.

The collective army sought an end to this creation using their fists, memorabilia, and a communal agreement to keep each other on their feet and in the fight!  For days the battle ensued throughout the Venator’s holds.  The army of the justice seekers following the faux-Lancer as it moved to escape. 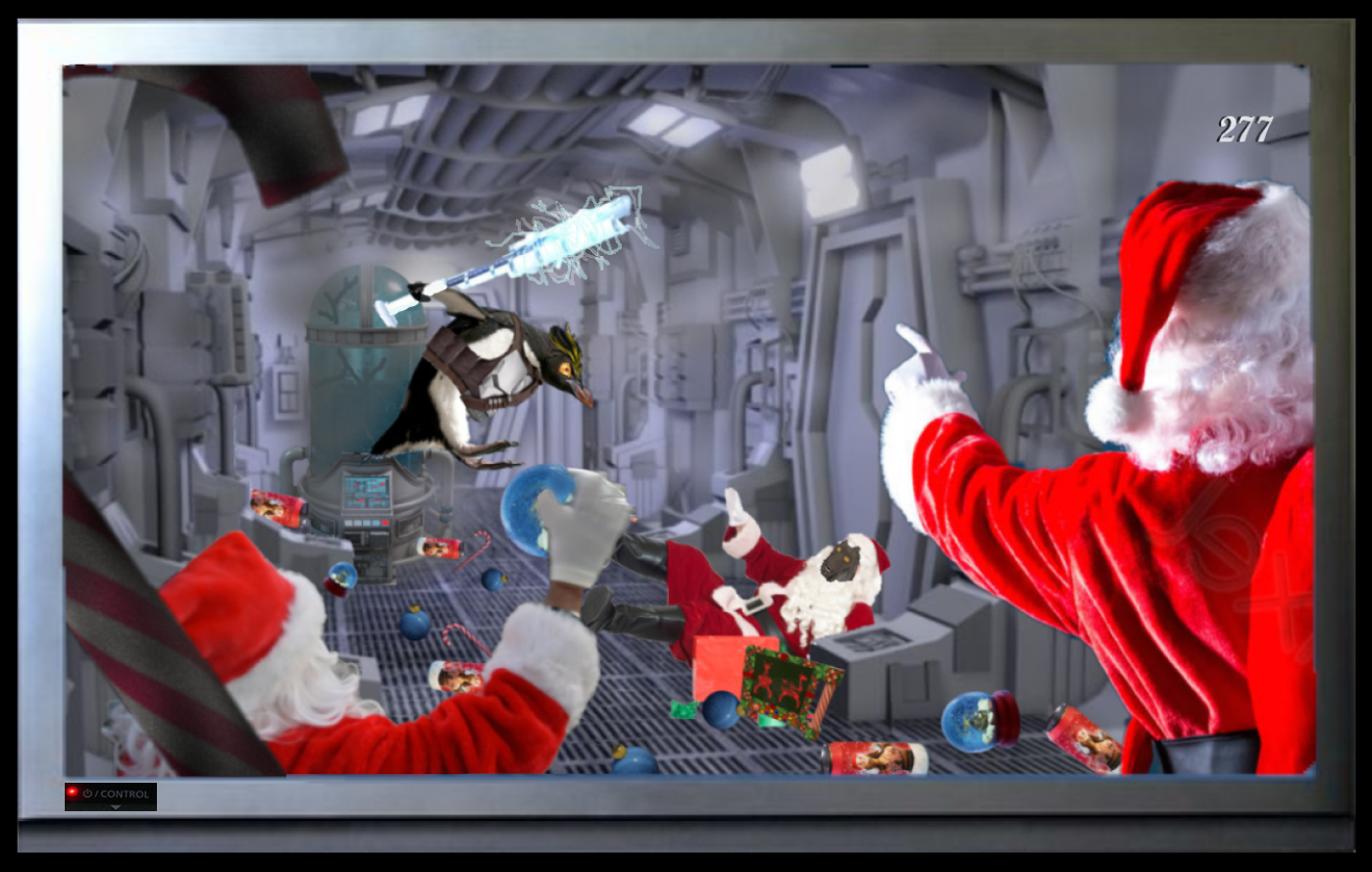 “Yea, once that... thing burst forth from its infernal birthin' pod, I think the majority of us knew something wasn't right.  It didn't feel like the Lancer we knew, it didn't sound like him, it didn't have the same mannerisms.  In fact, it just sounded like a damned Gungan!  It was practically falling apart and sparking; it seems it wasn't even complete.  So, uh... yea.  I punched it.” -Rawth Shacklefist 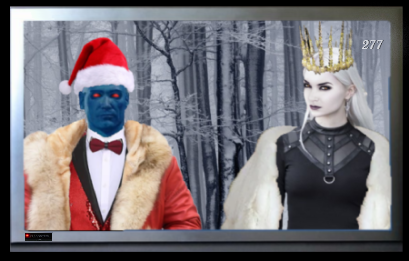 “All this Lancer stuff aside, I think this cloning incident proved that less developed xeno races like Gungans and Kaminoans should not have access to this technology." -Lilith Delcroix

But just as it seemed the crowd was about to put an end to the faux-Lancer, it escaped into a vehicle and sped off.  Reports indicate that the Imposter was seen boarding a parked Gozanti cruiser on the airfield and lifted off before anyone could organize a response.

“I will not forget the valor shown by all.  Also, those who did not fight, but did come to heal the others. It makes a warrior’s soul content. We will have to track it down soon so it cannot cause more damage in the vast Galaxy. We were able to defend ourselves, but not everyone out there will be able to.”  -Seth Haze

“I could not stand idly by.  I took out all the stimpacks I had in the sled and began to ‘spread love’ for all those who needed it, reviving them so they could continue fighting that horror of science. On a few occasions the fight got so close to me that I was even able to kick L4anc3r. The result was always futile, barely causing a scratch to the clone.”  - Kirlan Krane

“I believe Bar Bar Grems manipulated both the Kamino and the other Gungans and got himself a dangerous weapon.  The fight was difficult, but the Gungans somehow mitigated their big mistake by removing the armor from the creature during the fight.  I don´t think it was for good intentions, maybe their ‘help’ was just the Gungans cutting losses.” - Lucmark Warren

“I managed to fare quite well, especially with the support of my faction members.  A heartfelt shout out to the crew for all their love!!” -Kenant Wilsor

"I was happy to fling myself at that cybernetic abomination, along with many other brave fest attendees. After waking up from a few concussions, I found that I was better suited in helping the cause by providing stims or medicine to stronger warriors.” -  Lanavander Olesa

“We hit ‘em all we could but it was like punching metal. He was a slippery one too, dodging most of my attacks! It's unfortunate we didn't have enough people fighting to prevent its escape.  We just had to ‘keep our fists on the ice’ as I always say.” – Denton Dabbs

“Were it not for the cooperation of hundreds of brave and equally unarmed sentients, and the exceptional skill of dozens of dedicated healers and Force users, many of us fighting this beast might have fallen. As it is, we all survived, some of us just barely.  But that blasted clone escaped, and it now roams the galaxy." – Belloq Tull

Officially, the Gungan and Kaminoan camps have offered little explanation.  They have filed a bounty for L4anc3r in the hopes that the monstrosity is stopped.  Perhaps its apprehension, or destruction, will yield clues as to where Lancer Topiala is now.   However, there are those that believe Lancer rises above all of this and will manage to free himself and join the festivities at the next galactic event.