Ord Cantrell, Fath – The latest news from Ord Cantrell and the galaxy at large comes to you from a BD-3000 Protocol Droid identified by the designation Cortex. The local festival 'Qukuuf Custom' has graced the planet for the third straight week, with local sentients of all races emboldening themselves with temporary tattoos across their faces as a sign of allegiance and joy towards the Kiffar people. 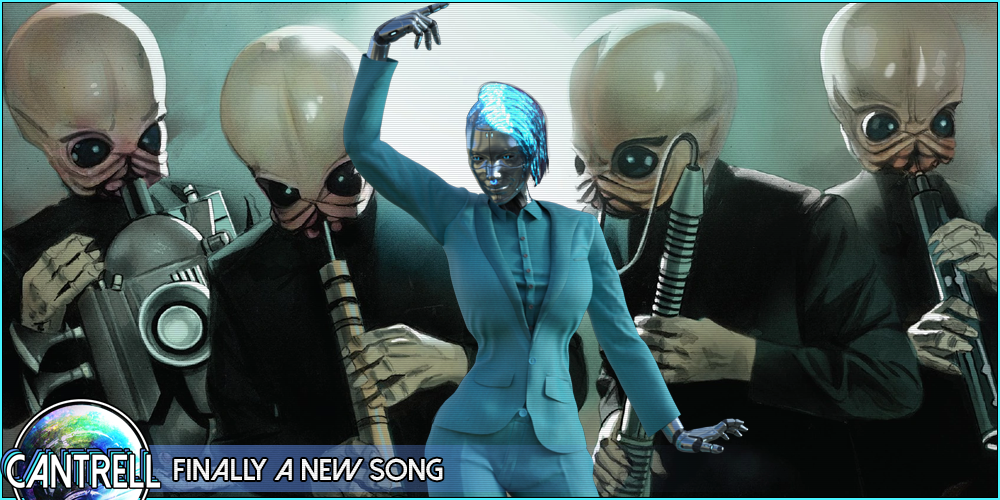 The first story of the transmission comes from the conclusion of the Swap Meet, where a prominent band of Bith Musicians that regularly toured across cantinas and taverns throughout Tatooine announced a new song would be released within the coming weeks.

While a musical ensemble releasing a new song is often insignificant, the people of Tatooine have been in hysterics. The song is only the band's second song to be released publicly, having played the same tune repeatedly during the sets that often last upwards of four hours. While catchy and having been top of various galactic music charts across the years, many believed the song to be from a band with simply a one-hit-wonder until the news broke of an upcoming release.

Band publicists and public relations officials were quick to hype the upcoming release, plastering over now outdated Swap Meet posters with the teaser of a new tune. While the news is almost universally positive, Polis Massan maintenance staff were overheard on a break from their duties at the recording studio that the new song is just a repeat of their previous hit, simply one octave higher. While this news has damped the mood of some individuals, the growing majority across Tatooine appears to be anxiously waiting by their holovids for the new tune entitled 'Mad About Me.'

Csilla Mine Collapses, who's to blame?

The news came out of Csilla recently of a mining collapse that caused the death of several Chiss citizens simply trying to make a few credits, aiding the Chiss Ascendency in their raw material outputs. Suvellience of the mine, conducted by the Csilla Safety Commission, apparently showed a large gas explosion. While its origins are unclear, the quantum within the mine appeared to ignite with the gas as machinery malfunctioned, with the Chiss miners not noticing that their eye-snatcher had lost consciousness several minutes before the blast.

The Quantum Mine within Mining Zone Csilla #095 was closed for several days following the incident as authorities conducted repairs. Mining has since recommenced; however, families of the lost Chiss are angry at the Safety Commission and the Ascendancy for their lack of transparency on the issue. While the Ascendancy paid for funerals for the families impacted, the totaled financial compensation was a meager 75,759 credits. Grand Syndic Remus Soran, leader of the Chiss Ascendancy, appeared taken aback by the incident and public outcry, responding to questions from local reporters about rumors of the Ascendancy paying off the safety department to eliminate inspections with a sarcastic joke "You guys have a safety department?"

Since the incident, minor anti-governmental operatives across Csilla have begun publishing propaganda and other defamatory information about the Grand Syndic, with a central theme highlighting corruption at the highest levels of government and reckless disregard for worker safety. These splinter groups have also called for appropriate compensation to be paid to the families and a severe internal review of safety standards and practices. Unfortunately, this BD-3000 droid fails to compute the value of life at such a low sum. It was believed a sentient was worth the value of an Executor-class Star Destroyer, but perhaps such a value is placed on a Coruscanti, while a Chiss is valued at the paltry sum of 75,759 credits. My mechanical being is worth more than a blue-skinned, red-eyed sentient evidently.

Recapping an ongoing story as its been identified that this BD-3000 Protocol Droid was fit with some erroneous programming, which caused my circuits to seek the destruction of fellow droids, including those of MK-series Maintenance Droid Wheels-425 and Techno-service Droid Cheeto-A2. Both droids have since been repaired and are once again fully operational, with the programming malware transferred to their subsystems successfully removed.

Internal investigation done by Cantrell personnel, headed by droid expert Zoe di Vigne, identified that the erroneous programming was put in place by a previous owner of the droid to cater to its work routines and required practices at the time. After locating and communicating with prior owners, including the most recent owner Riax Tardes, it was most recently worked as an assistant to coordinate construction workers from different planets. It was primed by bringing together a cosmopolite construction team to work as contractors on urban development projects on Daemir in the Unknown Regions of space. The droids' time with Mr. Tardes presented no issues due to a lack of interaction with fellow droids. It's understood that a small virus was imprinted into the droid during its production by a rogue employee at a droid production facility. 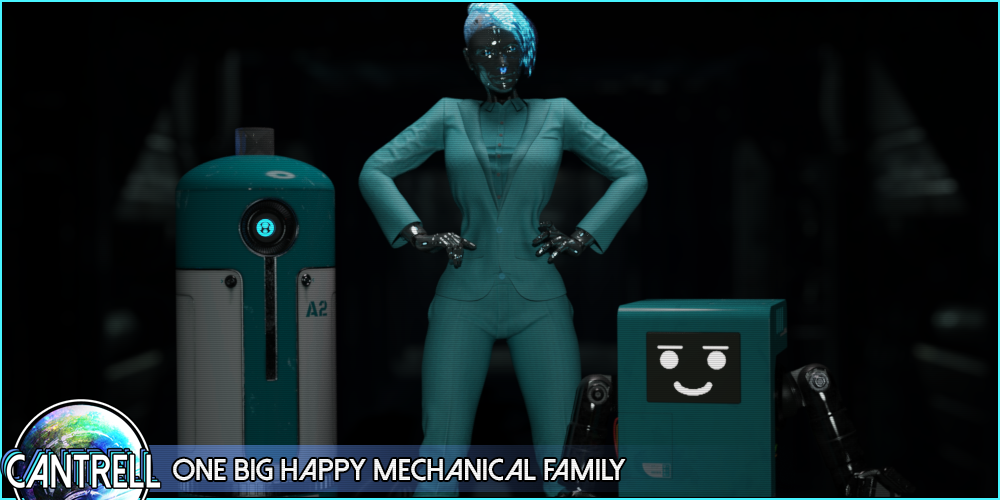 Working in unison at last

Cortex will maintain its role as the primary voice for the Cantrell Chronicle with a clean diagnostic and regular work routines, with Wheels and Cheeto assisting in publication research and lead generation. Both droids have been primed for future appearances in the field. They will undoubtedly share the occasional limelight with the BD-3000 droid as they return to active duty after some time within the well-known garage GeGe's within De-Purteen City on Ord Cantrell.

A crisis has erupted on Anzat within the Starport. Local traders and business owners report a shortage of synthetic soup for the prominent proboscises primed race, causing numerous deaths of local vagrants and prominent individuals alike with the symptom of brain failure at the hands of the sacred Anzati past-time. 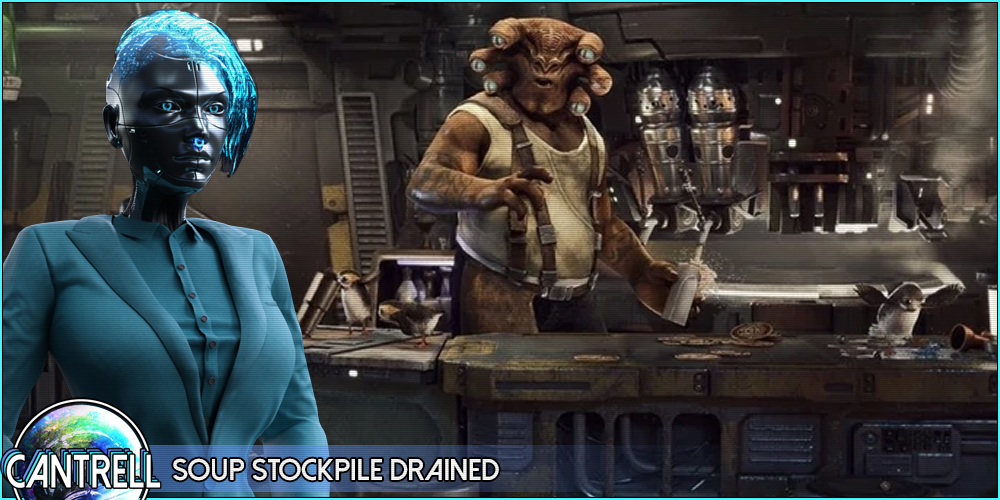 While local security remains on high alert at the public outcry, tourism has taken a significant hit. Many travelers believe that given a large portion of stationed local security is Anzati themselves; the crisis will only deepen. Before being found deceased several days later, one man reported their concerns to the local authority, stating concern for a prominent Anzati group. He spoke of being scared for his life and that soon this lust for soup would continue to drive them all across the Maldrood Sector. "I've never been more scared for my life. I mean, I'm Cerean, my head is huge, and our race has rich knowledge. It probably tastes as good as a well-cooked Bantha steak for an Anzati. Security didn't file a report; they licked their lips and did some weird thing with their tendrils. Ever since the New Anzat Order, eh, Commonwealth merged with the Tresario Star Kingdom, they've had to focus on multiple sectors instead of just the Anzati people, and it's now coming back to haunt us all. I blame that massive Morbus Creche personally, but I've got no evidence to back it up."

While the situation remains dire for many, Tresario subsidiary Cerberus Corporation has refocused some of its droid development departments towards synthetic soup development to stem the tide of the problem; however, this could not be officially confirmed in the Kingdom could not be reached for comment. The Cantrell Institute passes its condolences to the family of the Cerean individual and all the families whose brains were milked by the Anzati seeking a soup quench.

Our final transmission comes with news of a milestone from the Gilded Rose Auction House, which recently passed its 40,000th auction. Having been independently operated since the eighteenth recognized galactic year and previous as a subsidiary of Express Enterprises, the auction house led by Chairwoman of the Board Mishka Sorokin provides a neutral ground for any to auction their goods, with a weekly occurrence of an auction called the Late Night Credit Fights allowing those with the credits to seek the top bid on some rare goods either in person or via holofeed or proxy.

While many have tried to emulate the success of the Gilded Rose since or attempted to create something before its inception, no independent operation has reached the success of its auctions. Run solely by a group of volunteers, the auction house remains a non-profit organization that's one hundred percent independent, no doubt the reason for its success. As of this broadcast, its single largest competitive auction traded assets and credits to the value of one and a half billion credits, with similar amounts also coming close to usurping the record. 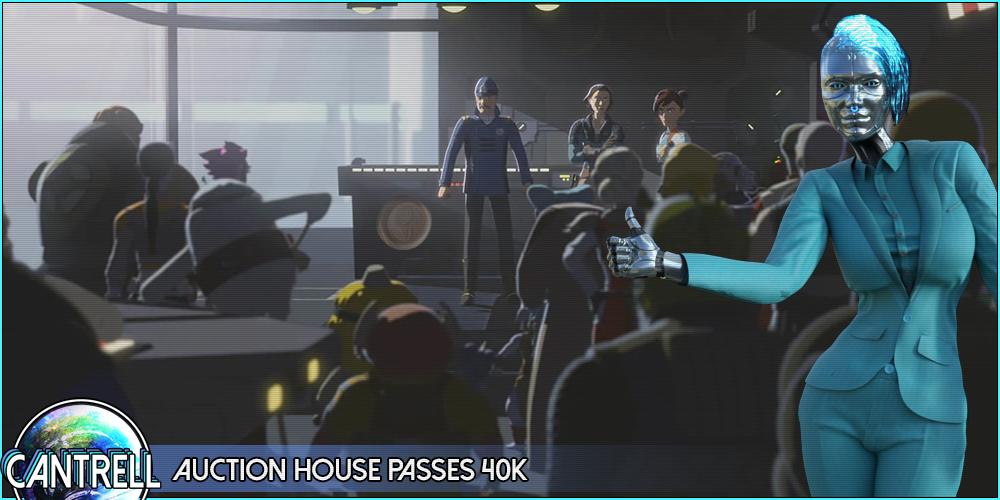 That's a lot of auctions

The Cantrell Conglomerate recognizes the Gilded Rose Auction House as an affiliate, with several of its members volunteering their time across the years to the independent operation. It wholeheartedly encourages anyone interested in a trade or someone in need of selling their items to seek out the Gilded Rose and enjoy its easy-to-use service. Late Night Credit Fights occur every Friday at 18:00 Imperial Time, while Fairwind Exotic Auctions runs ad-hoc auctions in tandem throughout the week. Their services can be found on Holonet Delta-15C0RD.

This concludes our transmissions from and around the Fath Sector. Cantrell would also like to remind the galaxy of the Faerytail Family's irrelevance, and to laugh at their expense. We will communicate further messages as warranted. Cortex out.