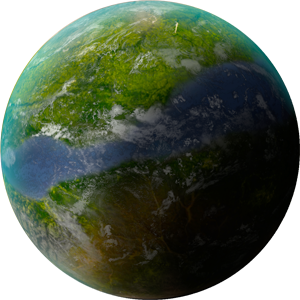 The only planet orbiting the sun of the Ord Cantrell System, Ord Cantrell is a sparsely settled, temperate world. It has one major forest which covers most of the northern hemisphere. Named after Daymon Reumar, the Kiffar explorer who first mapped it, the "Reumar Wood" is flanked by the Darmanis Jungle. The dense jungle region is split by the great, Moryne River, which runs the length of the planet and drains into Lake Moryne.

Ord Cantrell's major urban center, Settler's Rock, is situated on the southern bank of the Moryne River to take advantage of its endless supply of food and energy, as well as granting easy access to the wooded regions in the north. West, along the river, is Hangman's Beach -- a flat, rocky area where the colonists landed. The shore gained its name from a time when the colonists would use the trees along its edge as gallows to hang pirates, who used the river to launch swift raids on the small settlement. The mandatory death sentence for all pirates and public display of the punishment was intended to dissuade others from pursuing such a career but had little success in that regard.

The southern hemisphere is less hospitable and to the west of the fledgling civilization lies No Man's Land -- a large desert that few have tried to cross since the first explorers and cartographers mapped the planet. Beyond the desert is a flat, rocky wasteland bordered by the Darmanis Jungle to the north and the Gorra Mountains to the west. The regions are named for James Darmanis and John Gorra, a pair of Correlians that first came to the planet with the Twi'lek adventurer turned pirate turned planetary overlord, Tealon Moryne.

Moryne first settled with a band of like-minded thugs in the rocky region on the river's southern banks and used Ord Cantrell as a base of operations for raids into surrounding systems. Now the area forms the stronghold from which he and his band rule the planet. While Moryne is said to have been the Ord Cantrell's first inhabitant, that fact may only be part of the myth that has sprung up around him. At the very least, it has been confirmed that he was the first to travel the river and the lake, hence their names.

In the early days of the planet's settlement, Moryne and his crew turned their attention to the new inhabitants and often raided their camps for slaves and supplies. The colonists put up a valiant fight, despite their lack of arms and equipment, but were no match for the organized and well-armed pirates. After several skirmishes, the settlers relented and recognized the pirates as the ruling body of the planet, an arrangement that continues to this day.