Located within the caldera of an extinct volcano, the Forbidden Gardens of Nuswatta were the personal botanical collection of legendary tyrant Xim the Despot. Access could only be granted by Xim himself, and he did so only before killing the visitor; intruders met with slow and painful execution. Court scientists, tributary envoys, and loyal explorers brought prized specimens of the rarest plants from Xim's conquered worlds into the Gardens. The warlord himself frequently sought out new flora to add to his collection during his conquests - an unusual hobby for such a violent man. Upon Xim's death, his empire fragmented and the Kingdom of Cron took control of Nuswatta. It was the Kingdom that opened the Forbidden Gardens to the public and allowed sentients to marvel at the exquisite elegance cultivated by a cruel tyrant.

The Forbidden Gardens were once a vibrant and peaceful representation of an autocratic state built on terror and blood, acting as a botanical map of Xim's empire. Specimens from the heart of the empire were located near the entrance, while plants originating from farther out in Xim's territories were placed deeper into the garden. One of the few exceptions was a small stand of Bafforr trees imported from Ithor. Xim found the crystalline trees so alluring that he placed them directly in front of the Garden's entrance. Three thousand years after Xim's death, a rare natural propagation helped the trees develop enough combined intelligence to achieve collective sentience. Today visitors may converse telepathically with the grove who acts as a guide and historian, sharing what was lost and interpreting what remains in the Gardens. Another exception to the astrographic landscape was an Oasis Mother of Endregaad. This predatory tree produced roughly humanoid fruit that hunted and returned with prey to feed the parent specimen. It was placed at the farthest edge of the garden, along the very rim of the caldera, under the careful watch of sentry guns. During the height of Xim's power, the Oasis Mother thrived and fed upon the guests that the tyrant brought into the gardens, and served as a gruesome conclusion to Xim's tours. Modern day visitors need not fear, as these deadly plants starved to death after the fall of Xim's empire. The Amarin Light stands as a more practical exception. A small shrub, Amarin Light glows with white bio-luminescent flowers that evolved on the dense forest floor of its home world. Placed at regular intervals throughout the gardens, the pathways are lit by the flowers of the Amarin Light, which attract graceful Fleetwings - moth-like creatures also imported from Amarin whose Garden population represents the largest stable colony outside of their native biosphere.

Labour droids, such as the spider tree-feeders, can be seen moving steadily around caring for the plants with professional skill; however, in the centuries following Xim's death, malfunctions in the automated maintenance systems caused a number of specimens to perish, plunging a few species into extinction. The remaining collection is a priceless repository of genetic diversity that is studied by botanists and geneticists. Subsequent additions of rare floral specimens from across the galaxy by present-day curators have rendered the historical astrographic layout obsolete, though small plaques differentiate original specimens from the more recently-planted botany. The nearby research and museum complex also features a holo-projection documenting the original layout of the garden as it was at the time of Xim's death. 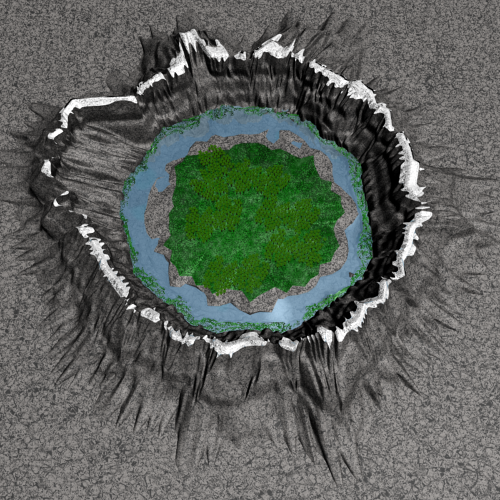