The Economy
MarketplaceEconomyPlanetary EconomyMissions and QuestsProductionRepairResearch
ProductionFacility ConstructionStation ConstructionMaterial Equations
Last Updated: Year 23 Day 252
Production
Table of Contents [hide]
Production is the creation of ships, vehicles, items, weapons and droids in facilities and space stations. All ships may be built in shipyard space stations (see Space Stations Rules) if the ship is the length of the station or smaller (doesn't apply to stations 3km or larger). Factories and factory stations are limited to ships less than 80metres in length. All Boats and Submarines are produced in Naval Shipyard facilities. All medical items are produced in Labs or Medical Factory Stations. All other ships, vehicles, items, weapons and droids are produced in factories or factory stations.
« Back To Top

1.1/ What are the requirements to produce?

* If a datacard is unassigned from the facility/station it won't affect any started projects, only queued projects. In the event of the datacard not having sufficient quantity a check will be made for other datacards assigned to the station that do.
Note
If the Manager changes while production is ongoing in such a way that breaks the above conditions production will halt at 100% until the problem is fixed and production is resumed and finished.

In the case of the operator changing in such a way as to no longer meet the requirements they will be replaced with the leader of the managing faction.
« Back To Top

The manager of the facility/station must be set to a production faction of the right type. For most cases this is simply the faction type that matches the type of entity to be produced (ie: Manufacturing factions produce weapons, ships, etc.). There are, however, a few exceptions to this rule. For example: A precise list of what type of faction can produce an entity is found on the entity's rule page.
« Back To Top

'Worker' type NPCs, a type of Civil NPC, are used in production. The NPCs must be in the facility/station and be managed by the production faction that is managing the facility/station. The amount of NPCs to be used on the project depends on the size and quantity of what is being produced. The number of NPCs is entered upon adding a new project and can be edited up until the project is started. Once the project is started you can't edit the requested number of NPCs, so plan ahead.
« Back To Top

Each project may have a maximum quantity of 48and up to 20projects may be queued up at once. Projects that are paused or queued may be moved up and down the queue, edited, or deleted at will.
Example
H. Appleby runs a group of shipyards for the Rebel Alliance in the Swansea system. He has a shipyard 3 producing two MC-60s, at 34% complete. An incoming transmission demands that the construction of the two MC-60s be paused to give top priority to replacing a MC-80a lost in the Battle of Ailartsua. He pauses construction on the two MC-60s and - after retooling the station to it's new project - the MC-80a begins production. In said battle, 26 X-Wings were also lost, which cannot easily be replaced in time, so Humphrey adds an order for 26 new X-Wings to the production queue and moves it to the top of the queue above the paused MC-60s. After the MC-80a is completed, production can begin on the X-Wings, before the MC-60s are resumed.
Production will automatically move to the next project until a failure condition is met. The operator of the facility/station does not need to be present for this to happen. The possible failure conditions are: 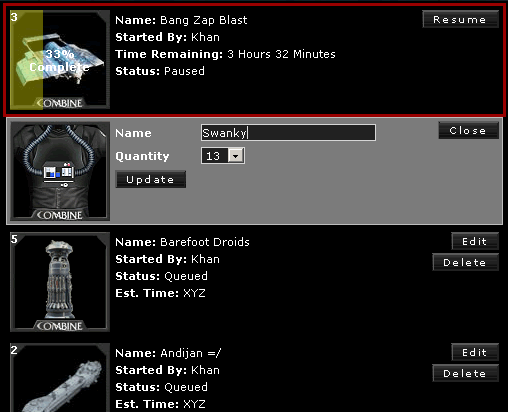 Example
J. Paxman sets up a shipyard with 6 projects of 12 X-Wings each and 4 projects of 8 Y-Wings each. Production will automatically continue on until it has built all 6 projects, providing he has enough materials to produce the X-Wings. At this point Jeremy will get a message from the station letting him know that he needs to retool the station if the Y-Wing production is to be started.


Note
More detailed instructions on how to use the production interface can be found on the interface itself.
Note
Entities which are produced in crates (items and droids) may not be in the production queue at the same time as other entities (such as ships and vehicles).
« Back To Top

* This may change to only adjacent material loadable facilities in the future.

Note
When production is started, the oldest pile will be used first.
« Back To Top

A datacard must be assigned to the facility/station in order for it to produce. Datacards are assigned from Inventory > View Datacards by the faction that owns them. Any faction with a datacard can assign their datacards to a facility/station of another faction. The quantity on a limited use datacard may be edited by the owning faction at any time. When a datacard is depleted the owning faction must either reissue the card or edit the quantity on the existing card.

You have the option of assigning a custom image to the datacards you own. There is no need to retool or otherwise alter the production process when the image is accepted. Once set, any entities produced with that datacard will have the custom image set for it instead of the standard image. When adding a project to the queue, or editing one that hasn't yet started, you may choose to use the default image instead of your custom image. For more information, see Datacards: Custom Datacard Images.
« Back To Top

Anyone with access to the command room of the facility/station who has Level 1 or 2 'Production' privilege may abort production at any time. Materials returned from aborting are placed in the facility/station doing the production, the materials are lost if there is not sufficient room. If the project is building ships or vehicles then they must be completely empty of all cargo and passengers before abort can begin. The amount of materials returned is the percentage of the time that remains minus ten percent.
Equations

Pausing production can be done at any time but results in the time to produce increasing by 10% of the remaining time. When a project is paused the NPCs that were working on it are unassigned.
« Back To Top

* It will be possible to add such ships/vehicles back into the queue at a later date.
« Back To Top

There are several places where the finished product may be placed.
Note

Shipyard stations may choose to produce ships shorter than 80 metres outside.

Items, Weapons and Droids are produced in batches. Unlike ships and vehicles, which are always in units of one, an item, weapon or droid can contain up to 50 in a single batch. The material requirements for batches are those listed on the rules pages. So, if the toolkit material requirements are 2 units of meleenium, 1 of rudic and 2 of varium that is for an entire batch of toolkits, not just one. Similarly, the quantity on the assigned datacard is the number of batches that can be produced, not the number of items, weapons or droids that can be produced. Batches can be anywhere from 1 to 48.

Equations
Batch Quantity = round(0.5 / squareRoot(Weight))
Weight: Weight of the item, weapon or droid.
« Back To Top

Items, Weapons and Droids are packed into cargo containers when production finishes. The containers cost nothing, cannot be filled with anything else and will disappear when everything has been removed from them. They will be placed in the entrance room of the facility and will be labeled according to what they contain. Upon adding a project to the queue you may choose the number of products that will be placed in each box. The batch quantity is the minimum number that may be put in each box, size permitting.

The facility/station doing the production will sometimes make contact with the relevant parties (see Production: Ships/Vehicles being removed during production) when something has gone wrong, or when production finishes. Messages are currently sent in the following circumstances. * May be removed if it occurs too often.
« Back To Top

If a project consists of more than one entity, there are modest savings in time and cost, compared to producing the same number of entities in projects each consisting of a single entity. No additional workers are required. This is known as the 'Mass Production Factor'.
« Back To Top

Example
H. Appleby tries to save credits on producing the 2 MC-80a's by using only 2/3 of the required NPCs. When he gives the order to start the project, the ETA given by the foreman is almost 50% greater than normal.

The ideal number of workers is a function of the length/size of the entity, and is listed on each entity's rules page.

To prevent the flooding of the economy before combat is released there will be temporary increases in the time to produce. As combat draws nearer, or if these don't prove necessary, the increases will be reduced or removed completely.
« Back To Top

As per Planetary Economy: Morale (M) rules, the group in control of the location receives a cut every time production takes place.
« Back To Top

A project directly started by someone gives XP to that person. Any projects that are automatically continued send their XP to the operator of the facility/station. A project that is resumed at some point gives the XP to the person who resumed.

All production XP gains are currently set to 220% of the normal value.