Squares marked with a purple shroud or with "Asteroid Field" tooltip are considered asteroid fields.

Asteroids occlude regular sensors, and flying within asteroid fields can be a blinding experience. Each asteroid square in a vision ray path will reduce further sensor power by half. 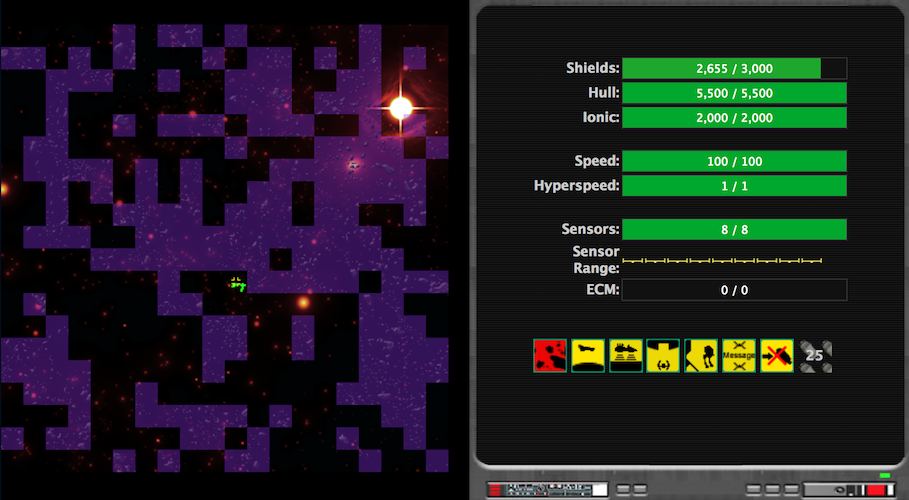 Asteroid fields are dangerous places. Asteroids behave unpredictably, and travelling through them is very dangerous.

Ships located inside asteroid fields take damage every hour, based on the length of the vessel. The following damage table is just a guideline: Damage is applied to shields, then to hull, although some damage may hit critical systems, and some damage may pierce shields. Critical hits apply double damage.

Ships located on the edge of the grid do not take damage from asteroids e.g. (X, 0), (X, 19) (0, Y), (19, Y).
Note
The Pilot/Commander/Owner of a ship which takes asteroid damage will receive a Combat Event. Damage which does not cause hull damage, and which does not cause the ship to fall below 95% of its maximum shield value, will not send a Combat Event. However, an event will always be recorded in the ship's cockpit noting that damage was sustained in an asteroid field.
« Back To Top

There are some stations which are designed to withstand the harsh environment of asteroid fields and can be built within asteroid squares:
Note
Any station type may be built on a system square which does not contain asteroids.
« Back To Top

Asteroid fields are home to scum and villainy. Bandits in small squads of fighters, gunships and corvettes may spawn and hunt down unwary players.

Between 2 and 4 squads of bandits will spawn in an asteroid field. Bandits usually fly weaker ships such as ugly-type fighters.

Destroyed bandit ships will be wrecked and converted to NPC-owned, and can be recycled using the appropriate tools.

The presence of a habitable planet, or the fact that a deep space system shows as being controlled by any faction, does not affect the spawn chance of bandits.
« Back To Top

Asteroid fields can occasionally harbor habitable planets in their midst. These planets are initially hidden from all scanners and do not appear on the galaxy or system map, and are only revealed as a side effect of prospecting an asteroid field for raw materials.
« Back To Top

Habitable asteroids in asteroid fields are discovered as a side effect of Asteroid Prospecting. To find a Deep Space Asteroid, a player conducts a prospecting action within an asteroid field.

There is a low chance of an asteroid field system containing up to a total of 2 planetoids capable of sustaining life. The following chart shows the chances for an asteroid field to contain a habitable planet(s):
« Back To Top

The terrain for an asteroid field planet is randomly generated square-by-square, with each square having the following spawn chances:
« Back To Top

Governance of asteroid field planets follow the standard rules of governments, as well as system control and calculations, with a few exceptions: