The combine utilizes a delayed real-time system so that players all over the globe can respond to things without fear of death because they were not online. As a result of this, movement in the combine tends to take awhile to get from point A to point B. This section will further explain how all the various type of movement works.

If you are under arrest, unconscious or dead, then you have no access to cockpits and cannot move.

All movement XP gains are currently set to 200% of the normal value.

Used by ships with hyperdrive to move from one system to another (or deep space). Ships travelling in hyperspace do not appear on any map or scanners, nor will the scanners of the ship in hyperspace detect anything. Docking into a ship that is in hyperspace is not possible.

Unassigning entities will cause all travel to abort, even hyperspace travel

NumSuns = Number of suns and blackholes present at aborting location

If the ship aborts into a sun or blackhole, the pilot is always killed.

If your ship emerges from hyperspace in an empty space square, then you are safe.

Hyperspace travel (and all other travel) is aborted if the pilot leaves the ship or boards a ship or vehicle within the ship. An astromech droid in the cockpit room of the ship, with relevant piloting skills will allow the ship to continue while the pilot is aboard the other entity. If the pilot has not returned to the ship by the time travel has finished, the pilot will not receive any XP for the journey.

After hyperspace has been aborted, there is a 60 minute cooldown before the hyperdrive can be used again. Each level in the relevant piloting skill will reduce the cooldown duration by 5% per level.

1.2/ Pulled out of Hyperspace

While in hyperspace, if a ship trajectory crosses a system or space square with an active Interdictor (or any ship with gravity generators turned on), then the ship will be pulled out of hyperspace and its travel will be aborted.

Inside a system (sun, planets) or in open space.

Can be found: Stations and Ships (wrecks are counted as ships). Ships can move within the system (using sublight drive) and dock onboard any other ship or station providing the docking conditions are met.

Docking conditions: A docking bay with enough volume and weight capacity for the target. Plus permission to come onboard (being on the ships/stations crew list or belonging to the same faction or character).

Note
Stations cannot dock aboard a ship.
« Back To Top

Note
Unassigning entities will cause all travel to abort.

Travel within the system can be aborted at anytime, it is instant, and you will stop at the square you are currently in. Travel is also aborted if the pilot leaves the ship or boards a ship or vehicle within the ship. 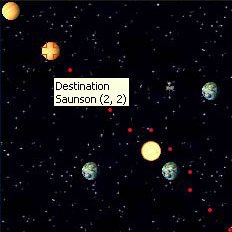 When a pilot plots his course to its destination, the ship computer will automatically avoid any suns and black holes in the way. However, a pilot can decide to override the computer decision and set the destination right into the sun or right into a Black Hole. If a ship arrives on a sun or Black Hole, its fate will depend upon its class. Fighters and gunboats on a sun or black hole are destroyed, along with whatever they contain.

Damage is dealt based on the percentage of the current stats, not the max value

Various events are logged and available to the ship cockpit (damage), all passengers in the ship (status of who died) and owner (to learn why he lost a ship).

When plotting your sublight course, your ship computer will automatically avoid suns and black holes.

Your ship computer will not warn you when setting a destination directly onto a system square which contains a black hole.

All planetary and celestial bodies (except comets) generate gravity wells that prevent ships from entering hyperspace. The equation determining the size of the gravity well is round(PlanetSize / 6). Only ships that have a hyperdrive, with accompanying navi-comp, can view gravity wells on the system travel map. Let's take a look at an example system, Sullust. 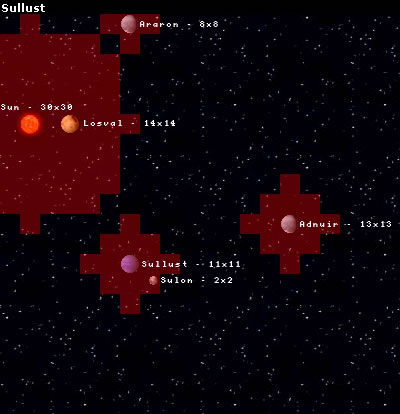 Entering hyperspace within a gravity well will result in ship damage.

At a great expense of time, credits and personnel, craft can be researched, or refitted with a gravity well generator and projectors that will create an artificial gravity well around the craft that prevents all nearby ships from fleeing into hyperspace. The pilot of the craft must be on board for the generators to function. The radius of the field is:

Taking the Imperial Interdictor Cruiser as an example, this has 4 projectors and thus a radius of 5. Due to gravity wells being displayed in a circular shape this equates to a 9x9 box with the corners missing and a single square sticking out at each compass point. Like so: 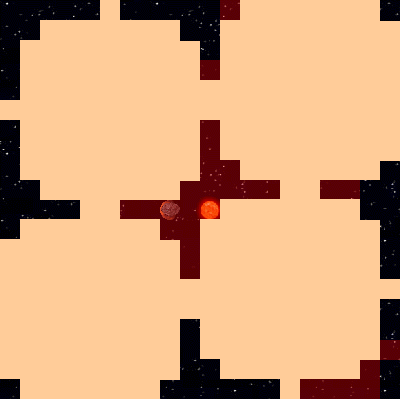 We see here four Interdictor Cruisers present in a system, even here there are still gravity free areas via which ships can escape. Whilst activated gravity well projectors inflict a 25% penalty to sublight speed and manoeuvrability to the ships they are mounted on. Shields on the ship can also not recharge whilst the generators are on due to the amounts of power required by the generators. Any craft with a gravity well generator and projectors will be vastly more expensive, and take far longer to build, than other craft of a similar size and capability due to the complexity of the systems.

Gravity well generators now take 8 hours to power up. Powering them off is still instantaneous.

Entering hyperspace within an interdictor field will result in ship damage.

2.3/ Moving from Orbit to Atmosphere

Traveling in a ship from Space Layer to Atmosphere Layer.

2.4/ Moving from Atmosphere to Orbit

Traveling in a ship from Atmosphere Layer to Space Layer.

Note
Escape pods cannot ascend from the atmosphere to orbit.
« Back To Top

Can be found: Ships and Vehicles (speeders) 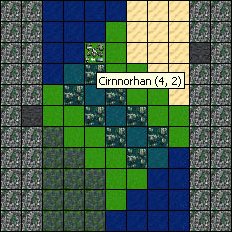 Ships and vehicles can move within the atmosphere and dock onboard any other ship or vehicle providing the docking conditions are met.


Docking conditions: A docking bay with enough volume and weight capacity for the target. Plus permission to come onboard (being on the ships/facilities crew list or belonging to the same faction or character).

Ships and vehicles fitted with repulsors can move within the atmosphere level.

Travel within the atmosphere can be aborted at anytime, it is instant, and you will stop at the square you are currently in. Travel is also aborted if the pilot leaves or boards a ship or vehicle within the ship/vehicle.

3.3/ Descending from Atmosphere to Ground

Traveling in a ship or vehicle from Atmosphere Layer to City/Terrain Layer.

3.4/ Ascending from Ground to Atmosphere

Traveling in a ship or vehicle from City/Terrain Layer to Atmosphere Layer.

Escape pods cannot ascend from the ground to the atmosphere layer.

Can be found: Ships with repulsors, Vehicles and Characters.

Ships and vehicles can move within the city/terrain square and dock on-board any other facilities, ships, or vehicles providing the docking conditions are met.

Note: facilities have only a condition on volume capacities, not weight. (Weight matters not).

Docking conditions: A docking bay with enough volume and weight capacity for the target. Plus permission to come on-board (being on the ships crew list or belonging to the same faction or character).

Vision range of a character:

Ship Speed: The maximum speed for vehicles is equal to 10 *(sublight speed) km/h but limited to a maximum 200 km/h.

Vehicle Speed: The maximum speed for vehicles is 200 km/h (or less if the vehicle speed is lower).

Aborting Ground Movement: Travel on the ground can be aborted at anytime, it is instant, and you will stop at the square you are currently in. Travel is also aborted if the pilot leaves or boards a ship or vehicle within the ship/vehicle.

The maximum speed of a squadron or of a party will aways be equal to the speed of its slowest member. 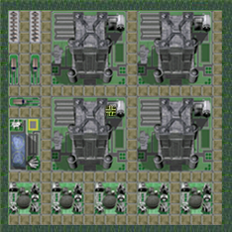 Races which cannot travel on aquatic terrain, can do so with the use of the Amphibian Survival Set:

All of the above items MUST be used, together, for you to be able to travel on oceanic terrain.

Races which cannot travel by flight, can do so with the use of any jetpack:

When building a city that has an area entirely enclosed by facilities (such as walls), players may make use of the Gate facility to allow transit from the enclosed area to the outer area. Gates may be accessed normally as any other facility, but behave specially when set "Open to All".

Gates set "Open to All" will allow ground travel pathing as if the facility did not exist. Essentially, players, NPCs, vehicles, or other entities making use of ground travel that is normally impeded by the existence of a facility will be able to walk over the Gate as if it did not exist.

Aborting travel while on top of a Gate will move the entity one step backward in their travel path.

5/ Moving from one City/Terrain Grid to an adjacent one

6/ About aborting your travel

There are two ways to abort your travel:

If you abort your travel by leaving your entity or boarding another entity, you will not get any XP for your aborted travel.

When piloting a ship or vehicle, multiple travel segments can be queued together using the travel planner.

The travel planner is able to plan the following travel:

When there are multiple different routes to a destination, it will attempt to take the fastest route:

If a character aborts any travel, the travel planner will be cancelled.

If the character is not aboard the ship or vehicle (including boarding docked ships/vehicles) when a travel segment finishes, the travel planner will be cancelled.

Once inside a ship, vehicle, station or facility, characters are in a room.

They may move from 1 room to another instantaneously.

Moving out of a facility is also instantaneous.

Moving out of a station in space is not possible.

To move out of a ship or vehicle, the following conditions must be met:

Pilots of entities may kick any passengers off their entity from inside the cockpit for any reason, using the internal kick option. To do so, the containing entity must be:

Anyone with access to an entity that is full may also kick out a random passenger from outside of the ship in order to regain access to it, using the external kick option.

Escape Pods allow crew members of a ship (or space station) to abandon the ship (or space station) in the event that it comes into harm. Escape Pods can then be piloted towards a planet of the pilots choice. However, once the Escape Pod starts to land, it can no longer take off, meaning you cannot move in the atmosphere layer (except descend to the ground) or the ground layer. Accessing pods is only possible when either of the following conditions are met:

Additionally, you must be in either the cockpit or entrance room in order to launch an escape pod.

A ship or space station, when constructed, comes with a fully loaded escape pod bay

Escape Pods can be re-added to the ship or space station through the use of the repair feature.

When using an active jetpack, a character or NPC will travel at 70 KPH along the ground.

When using a Jetpack, characters and NPCs can travel over facilities on the ground as if they were in a vehicle or ship equipped with repulsors. When the jetpack deactivates after a set time, any entity still located on top of a facility will be placed on a random free square around that facility, and will take damage. The amount of damage taken is determined by the following equation:

Force sensitive characters using the Force Speed skill gain a bonus to their speed based on the following equation:
Equations
Bonus = (Skill * 10) KPH