Your sensor power determines the max range to which you can see. Use the following equations to calculate your sensor range. A sensor power of 1 (such as ships with 0 sensors on board) means you can see only what is in your current grid.

Characters and NPCs equipped with Macro Binoculars have their sensor power increased by 5.

The scanner grid is the total area covered by the scanners or vision of an entity.

The sensor power is the intensity with which you can scan a square. It is directly dependant on the number of sensors and of the distance between the square and the entity. The range at which you can is equal to its sensor power. So for example, a ship with a sensor eight will be able to have a scanner range of eight.

Example of a 3x3 facility with 3 sensors

A facility has a sensor power equal to the number of sensors it has on each square of its surface. This enables it to scan entities that may be flying above it. 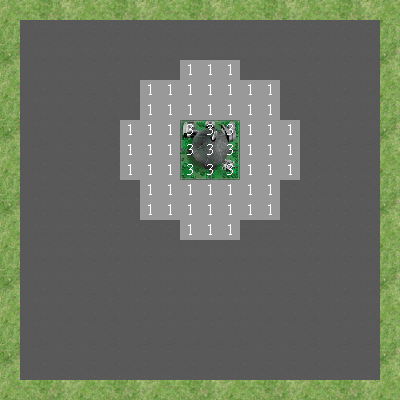 Obstacles block the vision range and may be any type of planet (in space) or facility (in a city). Entities can see what is on an obstacle (ships orbiting a planet, or around the facility), but not what is behind the obstacle. The image below shows an entity with 8 sensors and two obstacles. The 1x1 obstacle is a 1x1 facility, but may be a planet in space. The 5x5 is a facility. Notice how the entity can see what is located above the border of the facility. The green values represent another entity located on the border of the facility that can see outside the facility, but with the facility itself acting as an obstacle. 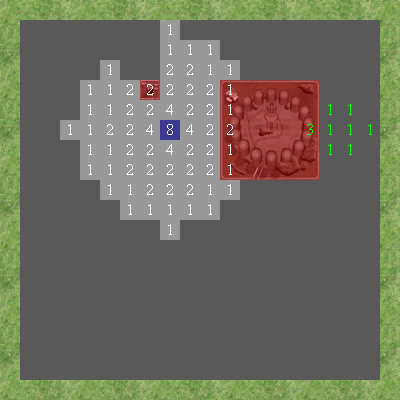 Ships, vehicles, facilities, droids, and stations will share sensors under the following conditions:

The Sensor Beacon provides scanner coverage in a radius of 5 squares around itself to any friendly entity.

The sensor grid is generated for each of your friends then all the grids are totalled up on a square-by-square basis and the final grid forms the sensor grid for the map. Overlapping scanning zones improve the sensor power on that square, thus reducing the chance for ECMs to hide anything there. 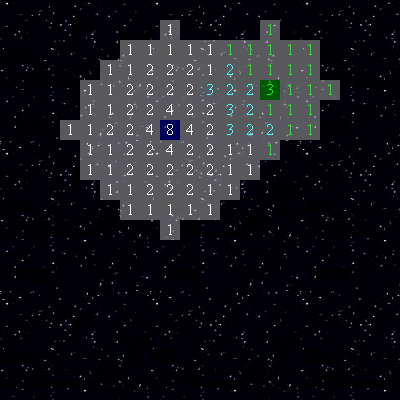 You will see the following entities on the map:

See the IFF rules for a detailed explanation of IFF and instructions for changing your IFF settings.

The scanner list displays all entities that are visible to you on the current map. If you are in a ship, vehicle, facility, or space station then all available information about the entities will be displayed. Characters will only be able to see the image, type, name and hull of entities if they are using their vision. A character can see more if they pick-up a sensor item.

Characters that are under arrest will be visible to everyone with one or more sensors on their location.

This scan will provide you more detailed information about that entity like weaponry, sensors, ECM and so on. If your sensors are higher that the target's ECM, then you will also see the materials and number of passengers, ships and vehicles onboard the target. Multiple Sensor Pack, Energy Sensor Pack, and Biological Sensor Pack are considered to have a sensor power of 1.

If you are within a room, you will see any characters in the same room as you.