The word "Praxeum" is derived from the old Coruscanti word "Praxium," which has at its root the word "Praxes". Roughly translated to modern Galactic Basic, "Praxes" means "the practical application of a specialized discipline of learning," and has become synonymous with a Jedi school. Praxeums are Jedi-affiliated campuses where force-sensitives go to gain knowledge from the masters, and more importantly, to learn how to apply the Jedi Code in everyday life.

Though majestic in scale, Praxeums emit an aura of serenity and peace. They are said to stand "quietly and humbly," with a calmness in harmony with their true purpose as shrines to the Force.

The Praxeum's layout displays a temple-like approach, with many small rooms encircling a central gathering space. In accordance to tradition, the Praxeum has four levels that taper upward. The topmost level consists of a large gathering room which serves as a Grand Audience Chamber and meeting hall. When not in use, senior Jedi use it as a refuge for reflection and contemplation.

Beneath the apex is where the personal quarters can be found. This level is mainly used as lodging accommodations for Jedi, but it is also where the Masters pass on their knowledge and teach their students the ways of the Jedi. On the third level, the centremost room is called the Strategy Centre, so named for being the hub of all planning and communications concerning the Praxeum. Around this Centre lay various meeting rooms, communications and computing bays, galleys and dining halls. In times of crisis and war, these rooms are used by allied forces and Jedi Generals as headquarters.

The ground level serves as the main entrance hall with adjoining hangar bay and docking bays allowing the Praxeum to accommodate visitor ships and vehicles alike. This short-term hangar also has a service area and small maintenance detail with a workshop for day-to-day repairs.

In addition to the three habitable levels, there is also a sub-level, that serves as an underground docking bay. The bay is large enough to store a small squad of light fighters, transport vessels and service craft, and is also used as the Praxeum's long-term vehicle and cargo storage. Beneath this underground landing facility, ramps lead to a cellar which is used in cases of emergencies whenever the Praxeum is under imminent threat (such as a surface bombardment). 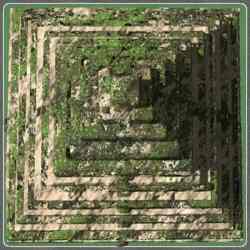