The LNR II-Series turbolaser cannon is a planetary defense weapon designed to combat encroaching capital ships and invasion fleets. The design of the LNR II is greatly improved over the older LNR I-Series model, with the structure being reinforced to withstand greater impact from attacks and a second turbolaser turret added to increase the cannons offensive firepower.

More spacious than its predecessor, providing enough living space for the operators required to man the twin turbolaser cannons and allowing for a single squad of troopers to be garrisoned within. The garrison itself provides increased security for the operators and a small force capable of combating hostile infantry that seek to destroy the LNR II.

The twin turbolaser turrets are able to rotate 360 degrees with an eighty-degree firing arc; additionally, the turrets can operate independently of each other which allows the two combatants manning them to defeat invading ships much more quickly and efficiently. The rounded structure of the LNR II reduces resistance to high-speed winds, powerful waves and similar weather patterns or environmental hazards. This small structural improvement increases the stability of the LNR II, when constructed on a planet with such a hazard, and decreases the risk of damage it would otherwise face. In addition, a single LNR II uses less power than two linked LNR I's, though it is often more expensive to build.

Most governments are capable of constructing the LNR II and often do so to protect vulnerable cities, military installations and their capitals. The installation's offensive capabilities combined with a garrison of troopers allow governments to easily defend their worlds from hostile ships and provide security even in territories with high crime rates. 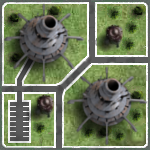