The R3 Astromech unit was an upgraded version of the wildly popular R2 model specifically designed to meet the needs of military groups, public and private. The chassis of the R3 remained unchanged from its predecessor, but its signature transparisteel dome showcased its many improved processing units and extended the range of its sensors. To better serve its intended purposes, the engineers installed a small holdout blaster to help the droid avoid capture. The model also comes with upgraded astronavigation processors that were originally advertised to hold more hyperlane information than any other droid at the time, but most who work with the droids note no major difference. These improvements, however, came at a cost. Several of the mechanical limbs that had made the R2 so popular with mechanics had to be sacrificed. While the droid was not as handy repairing starfighters on the fly, it has found a home on the bridges, navigation, and data analysis stations of frigates and capital ships in all corners of the galaxy. 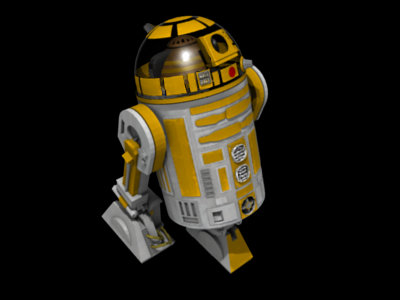