Originally designed as a smaller alternative to luxury barges, the Wind Rider did not initially have sails. Instead, it was a repulsor barge hauled by beasts of burden such as banthas or nerfs. In some cases other domesticated creatures that were considered more regal, such as the Kaadu of Nabbo, would be used for ceremonial parades. The barge also sported a one person crew and a tiller in the rear. This beast-drawn barge attracted much attention on the planet Sevacros II, where the low income population were interested in a cheap form of transportation. However, the planet's heavy and constant wind would only get into the eyes and orifices of the creatures, which would have caused them to become upset or even rampage in frustration.

With this in mind, the manufacturer's designers set to work on improving the Wind Rider's precursor. Working in conjunction with the Sevari and after tumultuous testing and redesigning, the new version consisted of a mast, two headsails, and a smaller main sail. The headsails were named after the people of Sevarcos II, in honor of their contributions. One more crew member was also required to operate the sails and was commonly referred to as a "sailor." With an experienced two-person crew and a strong wind, the Wind Rider could match, or even outstrip, most barges.

With the redesign culminating in the Wind Rider, the barge saw interest from parties on other worlds who also had to deal with strong winds, including those associated with pirating. A few of the purchasers made modifications to the barge, so the small barge could easily accommodate their lifestyle. Some of these alternate features saw the inclusion of increased hull, cooking areas, and even small to medium-sized weapons. With modifications to allow for weapons, it is said that a few Wind Riders could overpower many types of barges. 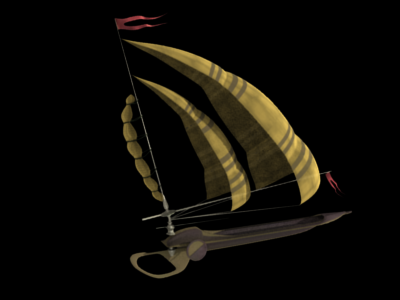