The Personnel Skiff IV is a low-cost, short distance, entry model transport vehicle normally used to haul cargo, unload large freighters, and cheaply transport sentients and droids. The skiff's performance and utility are qualities which help make up for its austere and unattractive design. Ubrikkian, the original producer of the Skiff IV, intended the model to appeal to fledgling enterprise as an economy class transport. Their marketing was largely successful, and the vehicle has been adopted by much of the general public, while its major design points have been emulated in other models.

Some of the features that are based around the concept of efficiency over beauty include a rugged set of basic control equipment, and a lack of the bells and whistles that tend to break the bank of the small-time dock crew. While its lack of padded seats, proper steps up to the deck, and other amenities common to other more popular vehicles, doesn't win the Skiff IV any friends in the suburbs, the crews who do use them view these "missing" items as beneficial to the efficient and timely transport of goods. All auxiliary space is devoted to cargo, including the sparse main deck that allows for quick and easy cargo storage and tie-down.

Furthermore, jump-seats with quick-release passive restraints allow for the safe transport of sentients, making the Personnel Skiff IV the most effective utility 'delivery vehicle' planetside. This reasoning and array of features is most likely why many transport companies use this ship to deliver their cargo across vast terrains. 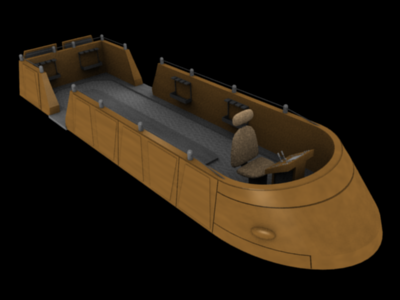