The 2-1B is currently the most advanced and the most customized medical droid available for purchase in the galaxy. They are much more prized than other medical droids for one specific reason: unlike other medical droids, their medical programming can be switched in and out as easily as their various other attachments and appendages.

The droid's engineers sought to create a medical droid that could perform a variety of different types of intermediate medical treatments on a vast array of species. The massive amount of medical data in addition to the necessary language and protocol programming cuased the initial prototypes to malfunction. To address the concerns of the investors, the engineers redeveloped the 2-1B's processor to allow for specific specialities, procedures, and biologies to be temporarily programmed into the droids by inserting different datapacks. This also drastically cut the costs of the droid, as customers now had the option to only pay for the programming their droids were most likely to require. The design became a sensation in the field of automated medical care.

Both to capitalize on their brand recognition and to save on parts and production, the company gave the 2-1B the same basic visual apparence as its predecessor, the Emdee. Their humanoid appearance is smooth with no rough edges and mimics the shape of protocol droids. They can appear skeletal to sentients due to their lack of reinforced frames or thicker armor. Their arms can be switched out to meet various different types of tasks, though they all have ball-and-socket joints to keep their movements smooth and flexible. The multiple joints on their legs allow them to extend or retract their heights and offer greater balance when treating patients.

The 2-1B droid is currently the most expensive and highly valued medical droid in the galaxy. The ease in which owners can customize the droid through datapacks, different limb attachments, and even paint jobs makes them very prized, especially when combined with their ability to perform greater medical procedures than any other medical droid on the market. 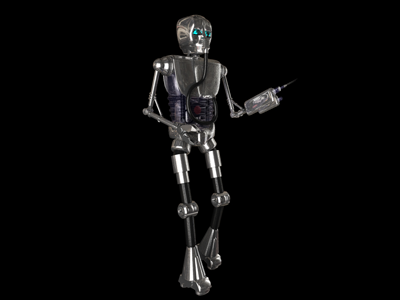