The All Terrain Recon Transport, more commonly known as the AT-RT, was a single-seater light combat vehicle, the first vehicle in the AT line and the precursor to the AT-AT, AT-ST, and AT-PT. While most commonly associated with clone troopers, the AT-RT was actually developed several decades prior to the First Galactic Civil War, alongside the AT-PT. However, due to the lack of actual warfare and almost nonexistent demand for scout vehicles, the few produced units only saw use by planetary defence forces. The dawn of the First Galactic Civil War created demand for a light attack vehicle capable of reconnaissance operations, leading to increased production and widespread use of the vehicle. A mainstay of the Grand Army of the Republic during the war, the AT-RT was one of the most recognisable vehicles of the era, cementing the vehicle in the minds of sentients across the galaxy.

The key characteristic of the AT-RT was its speed; the original model was able to reach speeds between 70 km/h and 90 km/h, and was agile regardless of the terrain, even being able to leap small distances. So organic was its pattern of movement that AT-RT pilots were often trained by first riding living animals. Furthermore, it was armed with a nose-mounted repeating blaster cannon and a mortar launcher, granting the vehicle considerable anti-infantry capabilities. Fitting its role as a scout vehicle, the AT-RT was equipped with a motion detector and other sensory equipment capable of long-distance observation, allowing it to feed this information back to other units. In times of need, the walker could also hold a second passenger, allowing for rapid evacuation of wounded or critical personnel. Depending on mission parameters, the blaster cannon could be replaced with a flashlight, allowing the AT-RT to function as an effective search unit at night or in dark areas.

Throughout the Galactic Civil War, typical AT-RT deployments involved small groups of walkers working together on scout operations, using their superior speed and agility to cover vast amounts of ground over difficult terrain. Five walkers were capable of bringing down an AAT tank without casualties, though this was due to the presence of its mortars, a weapon missing from today's walkers. However, due to its relatively light armament, AT-RTs were seldom used in direct assaults, and casualties tended to mount in the rare instances this occurred. This was due to the vehicle's key weakness: the pilot was completely exposed to blaster fire. While small armour plating was included, designed to protect against small-arms fire from hostile infantry, it was ill-suited for sustaining damage from enemy vehicles and heavy weapons fire, forcing the use of less conventional strategies to find success. Moreover, snipers and other long-distance shooters were capable of bringing AT-RTs down by simply shooting the pilots.

The AT-RT's glory days are long behind it, unfortunately, and the years have not been kind to the vehicle. Following the conclusion of the First Galactic Civil War, the AT-RT was gradually phased out of military use and recommissioned for local law enforcement agencies and planetary defence forces. Most have had their sensory equipment and mortar launchers removed, greatly reducing their utility, and the inclusion of a small-scale deflector shield did little to mitigate these losses. Remaining models are dilapidated and out of date, their capabilities damaged by wear and tear. At best they can match only half their former speed, losing much of the mobility that made them fearsome. With the AT-RT finding itself outmatched by contemporary vehicles as time goes on, its fate seems to lie in the hands of collectors and First Galactic Civil War aficionados, rather than on the battlefields it once dominated. 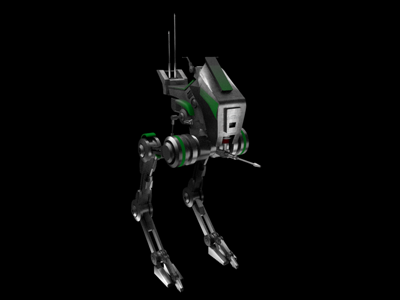